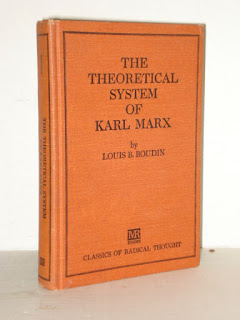 Book Review from the August 1968 issue of the Socialist Standard

It is welcome news that Louis B. Boudin’s book has been republished after being out of print for many years.

The new edition is identical with that published by Charles H. Kerr of Chicago in 1918, based on a series of articles written by Boudin for the International Socialist Review in 1905 and 1906.

In spite of the particular purpose for which it was originally written, in spite of the lapse of time, the intervening wars and revolutions, and the fact that Marx’s writings are now more readily available in the English-speaking world it is still an excellent introduction to the study of Marxism.

In his preface Boudin explained that he started with the intention of giving an account of the movement to revise Marxism, conducted by Bernstein and other Social Democrats in the 1890’s, but found this impossible except at great length because so much of the background was unfamiliar to English readers. He decided instead to provide “an exposition of the teachings of Marx”; not a text-book or detailed statement of economic theory, “but rather an outline of the Marxian system of thought”, with special emphasis on the relation of the different parts to each other and the unity of the whole.

He succeeded admirably, and though the names of the critics of Marx with whom he dealt are now of less interest, many of the points he made are as useful today as they were then.

Of course not all of his views have stood the test of time. He was for example over-influenced by the phase capitalism was going through in the early years of the century and appears to have accepted that the trend towards heavier unemployment was bound to continue.

In Chapter VI Boudin dealt at length with the way in which, consistently with the Marxian theory of value and surplus value, some commodities sell above and other below their value, and all capitals whether in the sphere of production or of circulation tend to receive the average rate of profit. Having explained how each capital shares in the surplus value produced in the whole of society and does not just receive surplus value produced by the workers in the particular firm, Boudin even anticipated by half a century the seemingly difficult poser presented by the automationist dream of a workerless factory. He showed that the individual capitalists can receive profit “notwithstanding the fact that their workingmen created no surplus value whatever or that they employed no working-men at all”.


Writing at the time he did, Boudin had no occasion to deal with the problem of a seizure of power (as in Russia in 1917) allegedly with the object of imposing Socialism on a population not ready for it. We can however read what he had to say about the conditions necessary for Socialism, the vital role of the proletariat and the anti-socialist outlook of the peasantry. It is therefore interesting to read what he said years later in May 1921, in a lecture to the New York Socialist Education Society:

One does not look to a poorhouse for Socialism and it is my belief that when a revolution has occurred in a backward country where the productivity of labour is low, either one of two things must happen; either the productivity of labour must be developed to a point where the prerequisites of Socialism, that is that the workers have sufficient leisure to educate themselves to a point where they are fully capable of administering their own affairs, are in existence, or else classes will appear . . . Private property is not abolished in Russia, and if Lenin has said so then he is mistaken and I must disagree, but what I have read of Lenin’s says just the contrary.