Political Parties and the Workers (1942) 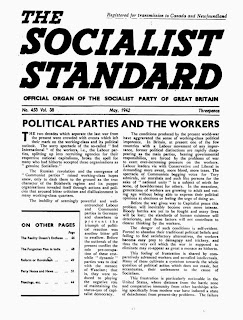 From the May 1942 issue of the Socialist Standard


The two decades which separate the last war from the present were crowded with events which left their mark on the working-class and its political outlook. The sorry spectacle of the so-called "2nd International" of the workers, i.e., the Labour parties, splitting up into recruiting agencies for their respective national capitalisms, broke the spell for many who had hitherto accepted these organisations as "genuine Socialists."

The Russian revolution and the emergence of "Communist parties" raised working-class hopes anew, only to dash them to the ground as the true character of the Bolshevik regime and its puppet organisations revealed itself through actions and policies that aroused bitter criticism and disillusionment in many working-class quarters.

The inability of seemingly powerful and well-entrenched Labour and Communist parties in Germany and elsewhere to prevent the triumph of political reaction was another bitter pill to swallow. Before the outbreak of the present conflict the sole pre-occupation of these erstwhile "dynamic" parties was to deal with the menace of Fascism; that is, they were reduced to playing the negative role of maintaining the status-quo of capitalist democracy.

The conditions produced by the present world-war have aggravated the sense of working-class political impotence. In Britain, at present one of the few countries with a Labour movement of any importance, former political distinctions are rapidly disappearing as the main parties, bearing governmental responsibilities, are forced by the problems of war to exert ever-increasing pressure on the workers, Labour leaders vie with Conservative and Liberal in demanding more sweat, more blood, more tears. The spectacle of Communists begging votes for Tory admirals, air marshals and such like persons for the sake of "national unity" is a subject of mirth for some, of bewilderment for others. In the meantime, generations of workers are growing to adult and voting age without being able to express their political opinions at elections or feeling the urge of doing so.

Before the war gives way to Capitalist peace this problem will inevitable become even more intense. Bloody battles are yet to be fought and many lives will be lost; the standards of human existence will deteriorate, and these factors will not contribute to clearer thinking by the workers.

The danger of such conditions is self-evident. Forced to abandon their traditional beliefs and failing to find satisfactory alternatives, the workers become easy prey to demagogy and trickery, and thus the very evil which the war is supposed to eliminate may re-appear as great a menace as hitherto.

This feeling of frustration is shared by comparatively advanced workers and so-called intellectuals. Many of these cultivate a cynicism towards the whole question of political action which does not mask, but accentuates, their uselessness to the cause of Socialism.

This frustration is particularly noticeable in the United States, where distance from the battle zone and comparative immunity from other hardships arising specifically from modern war have induced a state of detachment from present-day problems. The failure of the European working-class movement is attributed not merely to the particular character of existing parties;  the whole traditional belief in parties as such is called into question.

Anton Pannekoek, the Dutch writer on Marxism, states his position in the bluntest of terms. Writing in an American magazine, Modern Socialism, he says:

The belief in parties is the main reason for the impotence of the working-class  . . . because a party is an organisation that aims to lead and control the workers.

Further on, however, he qualifies this statement:

If . . . persons with the same fundamental conceptions (regarding Socialism) unite for the discussion of practical steps and seek clarifications through discussion and propagandise their conclusions, such groups might be called parties, but they would be parties in an entirely different sense from those of to-day.

Here Pannekoek himself is not the model of clarity, but he points to a distinction which does not exist.

However, it is not the practice of forming and supporting "parties" which has brought the workers to grief; the failure has come about by the aims and methods of particular organisations, and the membership which they have consequently recruited. Thus, with the exception of the S.P.G.B. and its fellow organisations abroad, all parties constitute themselves as groups of persons seeking power above the workers. That is just as true of Labour and Communist groups as it is of Conservative or Fascist. Though some will proclaim their intentions to abolish the present order in favour of a more equitable one, the main effect will be to replace one ruling clique with another.

A striking illustration is afforded by the Bolshevik seizure of power. The Soviet bureaucracy has formed itself into the new ruling class of Russia, and it is they who order the conditions of life and death of the workers and peasantry.

Only Socialism can guarantee the conditions of a life worth living for all. Because its establishment depends upon an understanding of the necessary social changes by a majority of the population, these changes cannot be left to parties acting apart from or above the workers. The workers cannot vote for Socialism as they do for reformist policies and then go home or go to work and carry on as usual. To put the matter in this way is to show its absurdity.

Socialist ideas are not acquired merely by the experience of hardships and tragedy under capitalism. They must be propagated and learned.

The party of the workers, therefore, cannot be anything less than a Socialist Party; its task, the conversion of the working class to the principles of Socialism. Nor can it at present be much more. It must eschew all the cheap tricks of electioneering and propaganda; whether these consist of open support for capitalism on the plea of "urgent" problems, or a futile appeal for "a Socialist Britain now." Such activities will not bring Socialism any nearer; the workers who support them are only postponing or evading their real responsibility.

That they do so is not due to any evil machinations or secret plots by these power-seeking parties. On the contrary, the existence of these organisations and the popularity of their illusory remedies is conditioned by the inadequacy of working-class political understanding.

So long as the workers do not comprehend the necessity and meaning of a revolutionary social change they will have no choice but to leave their fate in the hands of "parties" and "leaders." With the development of Socialist consciousness (class-conciousness) will come the realisation that they, the workers themselves, must take control of society. Knowing what has to be done will give them the will and assurance needed.

The Socialist Party of Great Britain and its fellow parties therefore reject all comparison with other political parties. We do not ask for power; we help to educate the working-class itself into taking it.
Sid Rubin
Posted by Imposs1904 at 9:05 PM