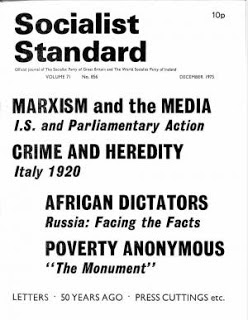 From the December 1975 issue of the Socialist Standard

If it would be wrong to say that poverty is an old friend of the working class, it is certainly a companion from the womb onward.

It is an ignorant delusion to believe that poverty is abolished during booms and times of so-called full employment, and only returns from banishment when there is a slump and unemployment. All the conditions of hardship, misery and deprivation, which are currently receiving so much media coverage, are there all the time. A slump simply makes them more widespread and sharpens the degree of suffering.

Poverty is an inherent part of class society. Under capitalism, the means of wealth production are concentrated into the hands of a minority class, or their state machine (which comes to the same thing). Wealth, the goods and services of society, is produced for sale with a view to profit. The vast majority are employees. By definition, they are propertyless. They must sell their working abilities for wages in order to live. They spend their lives as appendages to the factories, offices, mines and machinery owned by those who employ them. They are hired and fired at the dictate of the world market and the profit margin. They are alienated from life in any meaningful sense of the word. The wealth they are able to obtain, either through wages (if employed) or so-called Social Security (if unemployed or sick) is generally enough to keep them in working order and maintain themselves and families between pay-days.

That there are many workers in “better” paid jobs, who think of themselves as middle-class, in no way changes the basic situation. In fact it often accentuates it.

Poverty leaves a terrible imprint upon all who suffer it. Not only in the physical struggle to get by, but even worse are its mutilating effects on the personality and the mind. There is nothing so brutally pathetic, as a worker with a job who counts his “prosperity” in terms of hard work and rails against other workers who live on social security, without working. Poverty of the mind can be seen in the acceptance by most workers of the perverse ideology of their capitalist masters. It is this which anchors them to capitalism so that the whole ridiculous set-up keeps going.

It is not uncommon to hear workers in this country argue that if places like India, and other starving areas in the world, were brought up to the standard of living in Western Europe “we” would have to make sacrifices. This reflects the capitalist ideology, in that it glibly looks to solutions within capitalism. Whilst it is true that poverty is a relative thing and that the degree of poverty among workers in most of western Europe is not so extreme as that of many people in India, this becomes a convenient argument in favour of workers here being content with their lot.

The real perspective in which to see the issue, is in terms of the technological capacity for world abundance, as against the inhuman, profit-motivated performance of capitalism with its vast wastefulness and destruction (no less so in India). Capitalism subjects modern technology to the strait-jacket of the market. Over-population is one of the absurd myths that help to make capitalism seem plausible. It is sheer humbug to talk of over-population in a system which destroys vast amounts of food each year, or simply does not produce it. As we write, the Daily Mail (20th October 1975) carries a story of nearly a quarter of a million tons of apples destined for destruction, because

. . . the cost of shipping them to the hungry millions in Asia would be far more than their value.

Nowhere in the world are there any wealthy people starving. But even in the wealthiest countries there are poor people who go hungry.

John Pilger, the well-known and widely-travelled journalist, has seen poverty in many parts of the world. On 28th February 1975 the Daily Mirror carried a report he sent from Detroit. After a brief reference to the American Dream and Henry Ford’s promise to make the workers rich, the report gets down to the ugly realities of capitalism.

At the time of the report there were more than 8,000,000 Americans unemployed. In Detroit, the car industry was at a standstill with 26 per cent, (officially) unemployed. A young unemployed worker who was interviewed said:

Guys who thought they had it made are now getting a taste of what the poor and the blacks have always had. I’ll say this; when the supplement runs out it won’t be only the blacks who’ll be picking up a brick to get some food.

Government food stamps are regarded as “the badge of poverty”. There are 37 million Americans who qualify. Pilger details a picture of abject poverty. He says:

In the last three months since the lay-offs began in earnest, the Detroit Health Department has reported 150,000 cases of malnutrition, mostly among women and children.

The same food which Washington sends to the starving of India is being sent to the heartland of American industrial wealth: and incredibly, people get this food with a medical prescription marked, in large type, MALNUTRITION.

Six months later, Pilger was in Liverpol and another report appeared in the Daily Mirror (14th August 1975). He interviewed a family who live in a three-year-old block of council “barracks”, where damp has destroyed lino, bedding and clothing. The rent for this unhealthy hole was £9.45 weekly. The breadwinner was unemployed. They were £50 in arrears of rent and had been threatened with eviction. The father, who is up at first light every day following up job ads, said: “Watching my kids pushing down bread and marge just to stop hunger pains is the greatest humiliation.” They were told by those champions of the needy, the so-called Social Security: “You should be more thrifty, you should be less wasteful.”

Pilger goes on to cite a report by the Child Poverty Action Group, showing that 5,000,000 people (in Britain) were spending as little as £1.60 per head each week on food, and this was diminishing. This was at a time when the average amount was £3.46. The penalty for two people being unemployed or sick in July 1974 was to be condemned by the Welfare-State to live on a pittance of 29 per cent. of average earnings. By November this year, it is expected to fall to 27 per cent.

Pilger slates Wilson and Healey, and calls them “jugglers and manipulators”. He says they “have lost all grasp of what is happening to millions of people in this country”. People who buy above-average amounts of baked beans and margarine and less than half the average amounts of butter, meat and fish. People who under a Labour government suffer hunger and among whose children rickets is returning.

Pilger, like the Daily Mirror and the media as a whole, comes to no conclusion. He lamely poses the question: "Where have all the radicals gone?” The “radicals” are those do-gooder reformists who built that supreme political irrelevance the Labour Party. Which, with the support of the Daily Mirror, is currently running British capitalism. The radicals, who were going to “tax the rich out of existence” a generation ago, seem resigned to the “compromise” of starving the poor out of existence. The Labour Party has long been stripped of any pretence of being other than a capitalist party.

Capitalism mocks all who try to tame it. The very morning the Daily Mirror announced 1,000,000 unemployed (25th July 1975) it carried a front page story about the Kleenex tycoon’s wife Roberta Kimberley, who filed a claim for expenses in her divorce case, which included £1,000 per month for food and £300 per month for flowers. Meanwhile, back on the other side of the class jungle, the nationalized (state-capitalist) gas and electricity authorities, with the aid of energy-man Benn, were making various ludicrous suggestions as to how the poor might be enabled to pay their ever-rising gas and electricity bills.

Determined as ever not to learn from history, the “Communist” party, IS, the WRP, the “bad boys” in the Labour party and the trade unions, are busily drumming up the schemes of the moment and proffering useless advice to the government on how to run capitalism — without crises. Poverty, despite all the schemes of the “left” and generations of reform legislation, is as virulent as ever. Socialists have never been deluded that it would be otherwise.
Harry Baldwin

That's all of the December 1975 Socialist Standard now on the blog.