Party News from the March 1942 issue of the Socialist Standard

Classes, Lectures, Discussions
Prior to the outbreak of the war, classes on diverse subjects were held at the old Headquarters in Southwark, and many of our readers will recall the highly successful lectures which were delivered under the auspices of the Bloomsbury Branch in Doughty Street, London. Many of the Bloomsbury lectures were repeated at various other London branches, and in some cases at branches in the provinces. War conditions, however, made it impossible for a time to continue this important activity. Gradually conditions improved sufficiently to enable us to organise a new effort aimed at developing the abilities of potential writers and lecturers, and generally fitting the members to increase their capacities for the propagation of Socialism.

Last September the first of a new series of classes on Marxian Economics, the Class Struggle, and Ancient, Mediaeval and Modern History was inaugurated. Com. C. Lestor was the tutor, and the classes were conducted every Monday evening at our new Headquarters. There was an average attendance of 35 keen students whose interest and enthusiasm were maintained throughout the course, which terminated in January. Another series to be run on similar lines is under consideration.

A writer’s training class, under the direction of Comrade H. Waite, is achieving encouraging results. Already a number of articles produced by the students of this class have been published in these columns, and as the class develops its full scope more articles will doubtless be forthcoming. The tutor is at present working on a scheme which may enable would-be writers for The Socialist Standard to receive tuition by correspondence.

Friday evenings are devoted to discussion meetings at which a Party speaker opens up the discussion on a subject previously selected by the organisers of the classes. Then follows a general discussion. Since the commencement of these meetings a variety of subjects, including many of topical interest, have been dealt with. Valuable experience has been gained by members who aspire to the Party’s platform. These meetings not only serve to increase the knowledge of members, but they afford many opportunities for them to develop their abilities to speak in public. The following Party speakers have contributed to the success of these meetings: Comrades Rubin, Waite, Turner, Cash, Young, Groves and Hardy. The average attendance at these meetings is 40 members.

On Sunday evenings, lectures have attracted audiences averaging about 60 members and sympathisers. Up to mid-February the syllabus and the lecturers were as follows: “ History of Political Economy,” Com. Goldie; ” Dictatorships, Ancient and Modern,” Com. Turner; “ History of Socialism,” Com; Cash; “ Federal Union,” Com. Groves; and ‘‘Tendencies for Socialism,” Com. Rubin. These lectures evoked great interest amongst the members, and the series is to be continued.

Although the foregoing classes and lectures are not the kind of activities from which the Party expects to benefit financially, the students have emphasised their enthusiasm by donating liberally.

The organisers are giving serious study to the question of enlarging the scope of the classes, and duplicating them in other parts of London. The possibility of extending aid to provincial branches to enable them to organise a similar effort is also under consideration.

In a few weeks the outdoor propaganda season will be here, and it is hoped that we shall be in a position to conduct an increased number of meetings as compared with last season.

Meanwhile, arrangements for debates are being made, and proposals for propaganda meetings in Manchester, Glasgow, Bristol, etc., are being examined by the Propaganda Committee. Fixtures, as they are made, will be announced in The Socialist Standard and advertised by other means.


Annual Conference
It is probable that the Party’s Annual Conference which is to be held on Good Friday, Saturday and Sunday, will be one of the most important and interesting in the history of our organisation.

Many delegates, members, and sympathisers from the provinces are expected to attend, and “exiles” from London will have the opportunity of renewing contacts.

Arrangements are being made to hold the Party Re-union and Dance in the evening of Easter Saturday. Details of the venue and times of the Conference, and of the Re-union, are announced elsewhere in this issue.

London comrades who are in a position to offer hospitality to delegates from the provinces during Easter, are asked to communicate details to the Social Committee at Head Office. A speedy response to this request will facilitate the task of fixing up suitable accommodation for our comrades.
H. G. Holt.
February, 1942. 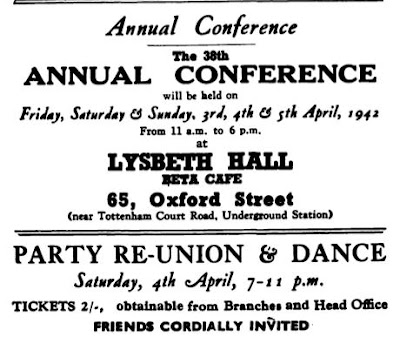 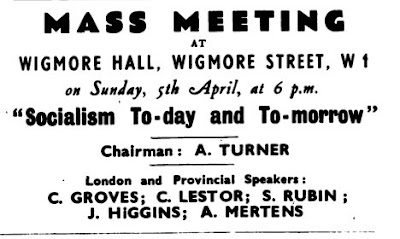