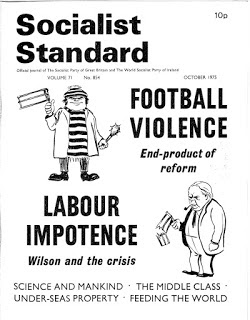 From the October 1975 issue of the Socialist Standard

A prize for ingenuousness is due to Lord Bruce of Donington. In a letter to The Times of 23rd August he wrote about the Government’s anti-inflation policies getting insufficient support from the press, who are controlled by wealthy barons without sympathy for a Labour government. Therefore, said Lord Bruce, the need is for a government-controlled newspaper “on lines similar to the BBC” which would give “a fair presentation of the whole panorama of domestic and foreign affairs, of life as it is unsensationally lived”, etc.

The Times seems to let its letter-writers get away with anything, but most newspapers would think about their reputations before publishing wild stuff like this. When did the BBC go in for “a fair representation” of things? Political minorities occasionally get their existence and views made known in the “biased”, “untruthful”, “misleading” press Lord Bruce complains of; but not on the BBC. It is as difficult to get even a letter published on the radio as in a national newspaper, unless you are in the House of Lords. Does he really claim that the BBC does not suppress and trivialize under the editorship of smug individuals, as he says (quite rightly) happens with the press?

Lord Bruce is the former Labour MP Donald Bruce. He should be old enough to remember a pre-war incident when a trade-unionist was to broadcast. At the microphone he announced that cuts had been made in his script, by the BBC; he would therefore not read it, but would send it to the press. Moreover, a government-run publication is as susceptible to pressure groups as privately-owned ones are to commercial interests. Before the last general election Mrs. Whitehouse asked the party leaders for their views on the moral and political content of broadcasting. Presumably, if her association were strong enough, it would make the answers it wanted the condition of electoral support.

This newspaper, he says, would be produced in competition with the existing ones. As he knows quite well, in modern times a pro-Labour propagandist newspaper has never held its own in such competition for any length of time — the reason for the position he objects to. What Lord Bruce apparently wants is a Labour newspaper supported by the government. He is entitled to argue for such a project — but not to humbug his readers that the BBC provides a model for journalistic high-mindedness.

My educated guess is that this unsigned article was written by Robert Barltrop.