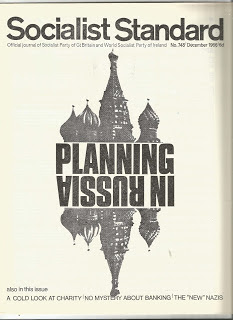 From the December 1966 issue of the Socialist Standard

We are on the verge of a slump. The so-called affluent society is crumbling.

Once more the capitalist class is caught up in the implications of its own ridiculous system. For weeks past we have had news of redundancies, mounting unemployment, falling share prices and gloom on the stock exchange. Those who have been clamouring for a reduction in the cost of living for so long are due to have their ambitions realised in a most unpleasant manner.

It has all happened before and will continue to happen periodically so long as the working class continues to support the capitalist system.

During the last General Election the working class, upon whom the capitalist class depend for support, was promised more of everything desirable and less of everything undesirable. Once the Labour Party was well and truly in power the mask of good humoured tolerance was cast aside and those who had expected years of continued affluence measured in terms of bigger cars, TV sets, holidays abroad and all the things that have been available in recent years were suddenly confronted with a Labour Party that is hardly distinguishable from the Tories who are traditionally opposed to working class interests.

So here we are. The Socialist Party of Great Britain has never had any illusions about the way capitalism would go. We were not deceived after the war when optimistic forecasts were made about the years of prosperity stretching out ahead and slumps being things of the past. We know how capitalism works and are therefore able to tell what is likely to happen next.

Even without the Labour Party’s conscious effort to create unemployment by introducing the Selective Employment Tax capitalism would follow its familiar pattern of overproduction. Foreign markets are becoming more competitive and some manufacturers are finding it more and more difficulty to compete with rivals. The smaller companies will crumble, and survival will only be possible for the large groups who will cut out unprofitable products as was recently seen in the case of ICI. The continued dismissal of workers means that there are more workers on the labour market and since labour power is a commodity a surplus of it forces the price down. Unemployment becomes a problem for the worker which intensifies his struggle to live. The trade unions are made impotent by mass unemployment and it then becomes obvious how limited are their powers. They can only resist the encroachments of capitalism on their members wages and conditions of work. This is the extent of their usefulness. Their role is purely reformist and can never be anything else.

Their muddle-headedness shows itself in trade union support for the Labour Party and the acceptance by trade union officials of knighthoods and other “honours” with which the capitalists buy off potential opponents.

It is possible that the slump that is just beginning will make the nineteen-twenties and thirties look like a Sunday School treat followed by another arms build up and the Third World War to decide who shall have the pick of the markets.

These events are the deadly monotony of capitalist production and so-called progress. There is only one way to stop it. The majority of the world’s workers must work together for the establishment of Socialism.

We must consciously take over from the capitalist class the sources of raw materials and the instruments for producing wealth so that we can build a society in which food, clothing and shelter will be produced for the use of all. In which competition will be abolished and with it the causes of war, insecurity and mass misery.

This is not a dream. It is the only practical solution to our economic problems. All that is needed is working class understanding and your conscious support of the Socialist Party case. We are here already organised as the only political party whose object is Socialism.
L.J.C.

Notice from the January 1967 issue of the Socialist Standard:

Last month we published what seemed to be an article, with the title, ‘It's up to You’. We did not make it clear that this was in fact a letter from a person who at the time was not a member of the Socialist Party of Gt. Britain.

I think that this confirms that 'L.J.C.' was in fact Louis J. Cox. He originally joined Bloomsbury Branch of the SPGB in 1943, resigning in 1958 ('personal reasons"), and then rejoined the SPGB via Paddington Branch in November 1966. He didn't stick around for long, resigning from the Party in 1970 ("not in agreement with party case"). He rejoined the SPGB again in 1980, finally resigning from the SPGB in November 1991 (reference to a "starry-eyed" takeover in his resignation letter). I've no idea if he went on to join the Socialist Studies group.