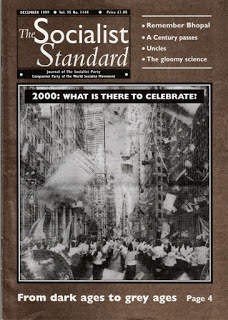 From the December 1999 issue of the Socialist Standard


Fifteen years ago this month the greatest industrial disaster of this century crept quietly over the sleeping one million population of Bhopal, capital of the Indian State of Madhya Pradesh. On the midnight of 3 December 1984, the Union Carbide chemical plant released over 40 tonnes of gases into the night air. What happened then, and what followed, clearly illustrates the anti-human concerns of the privateers of capital and their system.

The Bhopal plant contained a chemical storage tank, with 40 tonnes of methylisocyanate (CH3NCO), or MIC. It was this tank that ruptured, releasing this gas and possibly others (including hydrogen cyanide) into the air. The gas spread over an area of some 20 square kilometres, helped by the low, but changeable wind. The discharge lasted for around one hour. Lethal injuries occurred up to a distance of 2.5 kilometres from the plant, and people noticed effects as far away as 4 kilometres. MIC reacts with water, and thus is extremely irritating on tissues such as eyes, throat or lungs, and has a high acute toxicity when inhaled.

A number of factors led to the release of this toxic cloud. From 1980 onwards up till 1984 Union Carbide (UC) had been cutting the number of staff at the plant. The number of workers on the MIC tank was halved, from 12 to 6 and the maintenance crew was cut from 6 to just 2. In December 1981 a plant worker died from exposure to phosgene gas leaked at the site; in January 1982 28 workers were exposed to phosgene from another leak, and a further 4 in October of the same year. In May 1982 an internal report noted “a total of 61 hazards, 30 major and 11 in the dangerous phosgene/MIC units”. On the night of the disaster the refrigeration unit, meant to keep the MIC at near zero degrees (and thus stable), was switched off to save electricity, and the safety equipment was not functioning because it was under repair.

Lies
The exact cause of the accident remains unknown: somehow water got into the MIC tank, and began a runaway reaction. The MIC began to heat and evaporate, and eventually the valves burst, sending the gas pluming outwards—the safety equipment (the chimney and water sprays to douse the gas out of the air) failed to prevent the escape. As the leak began UC enacted the first of its lies. The warning sirens remained silent, so as to “not unduly alarm” the population within reach of the toxic cloud. One UC doctor is on the record as saying: “A lot of patients could have been saved had they not panicked, what they did is start running, which caused them to breathe more deeply. If they just would have taken their time and sort of walked away from the scene they wouldn’t have inhaled so much of the pollutant”. Days after the event UC were maintaining that MIC was “nothing more than a potent tear gas”.

History, of course, brands such statements lies, as, also, would the Union Carbide safety handbook, which stated “MIC is poison to humans by inhalation, swallowing or skin-contact even limited exposure can be fatal”. Of course, UC did not release such data to the public and in fact withheld all the relevant data about MIC even from the emergency teams, claiming to need to protect commercial secrets and intellectual property rights. This left doctors treating the victims in the dark, proscribing treatments that “might” help, but which might have made an outright disaster even worse. The toxic cloud left 8,000 people dead, and some 300,000 injured, of whom between 50,000 and 70,000 sustained permanent damage.

The social impact of this disaster was far reaching. The sick and injured often were the main source of income for their families, and medical costs for many of the survivors were more than their means allowed. The lingering effects of the disaster included blindness for many. Up to thirteen years later:


nearly one fourth of the exposed population is chronically ill with diseases of the respiratory, gastro-intestinal, reproductive, musculoskeletal, neurological and other systems. Corneal opacity and early age cataract are common in more than half a million exposed population. Breathlessness, loss of appetite, pain, menstrual irregularities, recurrent fever, persistent cough, neurological disorders, fatigue, weakness, anxiety and depression are the most common symptoms.

And chromosomal studies point to a future generation of victims of the leak.

Legal manoeuvres
Union Carbide immediately blamed a rogue saboteur or a disgruntled worker for the disaster. The Indian authorities begged to differ, and began criminal and civil proceedings against Union Carbide. UC proved unwilling to have its saboteur claims tested in court, and fought every inch of the way, hiring eventually $50 million worth of legal assistance to defend themselves. As civil proceedings dragged on, the Indian High Court ordered Union Carbide to pay a sum of $90.4 million, as an interim payment to help alleviate the suffering of the victims until the full settlement was reached.

At the same time the Indian government pursued a claim for $3 billion dollars in the US courts. The case was followed with interest on Wall Street, as it would establish a precedent for the accountability of multinational corporate entities. In May 1986 the State Court of New York ruled that the case could not be heard in America, and that it must go back to the Indian courts. Effectively, they ruled that corporations were not responsible in their home countries for disasters that occur abroad. As UC pursued appeal after appeal against the interim payment, they opened up secret negotiations with the Indian government.

In 1989 the Indian High Court announced a surprise deal. Union Carbide agreed to pay a total of $470 million in compensation, as well as providing $20 million worth of funding towards local hospitals. For its part the Indian government promised to protect Union Carbide from any future independent lawsuits. This settlement meant that around 90 percent of the victims would receive $430, with the average in total being $940 per recipient. This sum represented 50c per share of Union Carbide stock. On the day it was announced, UC shares rose by 2c. The awards barely covered, for most, the costs of the medical treatment they had required, let alone the earnings lost because of not being able to work.

The Indian authorities continued criminal charges against the 10 top officials of UC. They were charged with “culpable homicide”, a charge just short of outright murder. The initial proceedings were started by the local authorities on the night of the disaster itself, and the chief executive Warren Anderson was arrested. He was bailed for $2,000 and hasn’t returned to India since. Little movement was made on the criminal charges, until the Indian Criminal Bureau of Investigation brought charges in December 1987. Anderson resolutely refused to attend the trial, ignoring a summons from Interpol, and Union Carbide de-registered its Indian holdings. In 1996 the Supreme Court downgraded the charges to death caused by negligence, which carries a sentence of around two years. Throughout, the Indian authorities showed little zeal in pursuing the case.

Market concerns
Union Carbide liked to portray its presence in India as a beneficent act. But the fact is UC was there to make money and aggrandise itself.

It was market concerns that led UC to build a bigger plant producing hazardous chemicals than necessary at Bhopal, as Edward Munoz, a former director of Union Carbide India, revealed in an interview:

MIC is a volatile substance, and expensive to store, contributing to the potential for disaster, as the company, ever desperate to increase its profits, looked to cutting costs and jobs. At every stage myopic interest stood pre-ordinate in the minds of UC policy-makers.

Union Carbide was forced by its very nature as a publicly owned company (i.e. in that any member of the public may buy shares) to behave the way it did. As one commentator notes:


had they [UC] been genuinely forthcoming and made truly disinterested offers of help on a scale appropriate to the magnitude of the disaster, they would almost certainly have been confronted with suits from shareholders seeking to hold management to account for mishandling funds.

By the very laws on which such corporations are based, and by the very rigours and imperatives of the market, Union Carbide was categorically unable to behave in an humane way towards its victims.

Union Carbide has remained at the top of its industry, despite this disaster, and “the corporation participates in partnerships and corporate joint ventures whose combined net sales totalled approximately $4.1 billion in 1998” (http://www.unioncarbide.com/). It holds 22 percent of the paints market and 18 percent of the packaging market. This year: “On August 4th, Union Carbide and The Dow Chemical Company announced that their boards of directors have approved an $11.6 billion merger to create the world’s second largest chemical company, to be known as The Dow Chemical Company”.

This is taken from “A Brief Chronology of Union Carbide“, in which the Bhopal disaster only merits a brief mention as an act of sabotage that caused “a tragic loss of life”. Union Carbide has accepted “moral responsibility” for the accident, but it cannot let that get in the way of its profits. Like the scorpion in the oft-told story of the frog and the scorpion, the scorpion-Union Carbide put profits before people, because that’s what it does, it can’t help itself.

The story of Bhopal is not a story of a wicked cabal of corporates viciously conspiring against the people of India, but, rather, a story of the Mad-Blind Machine God of the market crushing all in its heedless path. All along the way, profits and property were put before the needs of people. Humans were subordinated to the drives of the commerce. 8,000 were slaughtered and quickly forgotten, and capitalists were given a green light to exploit the artificial divisions of national boundaries to escape any form of responsibility for their actions.

This is why it is all the more imperative that the working class organises itself, world-wide, to stand solidly against a system that can so wantonly throw away life.