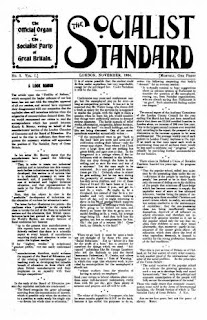 Party Notes from the November 1904 issue of the Socialist Standard

A member whose first name is Sydney, now rusticating in Hellingly, has been good enough to draw my attention to the discrepancy between the announcement, contained in the report of the Executive Committee published in the  October issue, relating to the number of the Party speakers and the number actually contained in the Lecture List.

The report stated “The Party has at its disposal over 15 speakers,” whereas my informant states he has counted the names appearing in Lecture List for October, and finds we have twenty-two "special speakers.” Our comrade is nearly right. I have looked through the list in question, but can only discover 20 speakers.

In any case the number is “over 15,” and the statement contained in the E.C. report absolutely correct. Were we to place on the list every member capable of holding forth from the platform we might perhaps muster 30or 40 speakers, but it is better to under-estimate than to over state our strength. We have no desire to “bluff” anybody by presenting a magnified view of our forces. The Social Revolution cannot be accomplished in a day, and neither can the instrument of that revolution, The Socialist Party, be built up in a few mouths. Our speakers to-day are counted by tens and our supporters by hundreds, but to-morrow these numbers will be increased ten and a thousand fold.

The same correspondent makes a suggestion which may be found useful. This idea is that a good deal of expense would be saved if branch business meetings were, where possible, held in members' houses. Socialists at any time are not very great believers in rent, and with the approach of winter, branches having only a small membership could, with advantage, meet in a comrade's house.

The outdoor propaganda season is now over, but at the Party speaking stations operations will be continued as usual, as for as the weather will permit. During the winter of course many sources of income will be closed to the Branches, and consequently some of our comrades, particularly in the poorer districts of London, may experience some difficulty in maintaining their Branches in a sound condition, financially and otherwise.

These dangers will be minimised if our comrades everywhere make special efforts to push the Party literature. As a clean and clear exponent of Socialist Science, The Socialist Standard has no equal in Great Britain. The sale of our Organ during the winter months will keep alive the local interest, be a means of holding together and securing new members, a source of revenue to the Branches, and finally will prepare the ground for the opening of the spring campaign with renewed vigour.

Things are commencing to move down in Battersea, where our comrades have organised the sale of The Socialist Standard in a really creditable manner. The results achieved are of such an encouraging character that Peckham will soon have to look to its laurels. Hitherto, Peckham has been to the forefront as regards their supply of the Party Organ, but a stride or two more will give Battersea the lead.

In other directions, too, our Battersea comrades are giving evidence of their earnestness in the Cause, indicated in the announcement contained elsewhere in this issue. They have organised a series of indoor lectures, to be delivered in Sidney Hall at 7.30 p.m. every Sunday in November, when various aspects of the Movement will be treated by comrades Elrick, Kent, Watts, and Anderson. Comrades not on duty elsewhere will do well to attend these lectures.

Although our Paddington comrades appear to be quiescent, it would be a great mistake to suppose they are inactive. Since the General Meeting the Paddington Branch has enrolled more new members than any other Branch of the Party. What on earth is Islington doing? Day after day I am seized with great fear and trembling as I open the despatches from the “Vale” containing the signed Declarations of new members. I fear and I tremble because with each upward motion of the Paddington membership barometer recedes the Islington promise to be the best Branch. If our northern comrades do not bestir themselves their Branch will indeed be the “greatest thing on earth”--except Paddington.

Comrades, everywhere, let us be up and doing. Let us pull steadily together. Let there be no resting on oars till, having conquered the adverse winds and the deceptive currents of Capitalism,  our craft is safely anchored in the haven of the Socialist Republic. Comrades, everyone; pass the word along. Onward!