The Importance of Elections (1968) 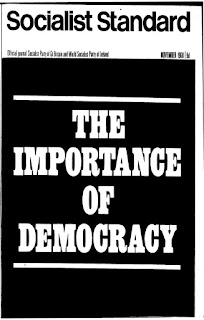 Editorial from the November 1968 issue of the Socialist Standard

This month, a lot of the Socialist Standard is devoted to the question of elections. One article deals with the American Presidential election, another with the campaign which led up to the Reform Act of 1867. There are two contributions about Votes for Women.

Elections are important because the party—and the class—that wins them thereby controls political power. It is a sad fact that ever since workers have had the vote the vast majority of them have chosen to support capitalist political parties and so helped to keep in being the system which exploits them and deprives them of liberty, abundance and security.

This has led some to question the usefulness of elections and to turn to so-called “direct action” as an alternative. “Direct action” usually means marches and demonstrations — sometimes violent and provocative-sit-ins, takeovers of colleges, factories and so on. The organisers of these activities hope that in some way they will lead to the overthrow of capitalism.

The one fact which this hope leaves out of account is that “direct action” is necessarily the tactic of a minority; a majority has no need to demonstrate for its demands because it can use its power as a majority to get them.

At the moment the majority are expressing their demand —or preference—for capitalism. They vote for representatives of capitalism who go to the various legislative bodies throughout the world to run society in the interests of the capitalist class, to protect the property rights of capitalism, to administer the state machine and to maintain the “law and order” with its basis in the privileges and exploitation which are part of property society.

There can be no opting out of this. Any threat to “law and order” will be met by the capitalist state, but that state does not act in isolation. The majority of the electorate—which means the majority of the working class—support with their votes the police cordons, the flailing truncheons, the bayonets of the National Guard, the water cannons of Belfast. The experiences of the demonstrators, far from proving the futility of political action, show its power—and (he need to control that power.

Does “direct action”, then, achieve nothing? In practical terms, these are some of its recent results. In France, after the May riots, the Gaullist government came back with an increased majority and so with a clear mandate from the French workers to deal firmly with the insurgents. In America there is a similar story; George Wallace won a lot of votes in unexpected areas from workers who wanted to see the ugliest measures taken against anyone they saw as a threat to the stability of capitalism.

British politics have also been affected; is probably true to say that every demonstration provokes the same sort of reaction among workers here as in America and France and so increases the support for politicians like Enoch Powell with his own particular appeal to working class ignorance and frustration.

Are the demonstrators, then, to stay silent and docile? Must we never protest against the bestialities and degradations of capitalism? No socialist would accept that proposition. But we want our protest to be effective, as no protest can be unless it strikes at the roots of the system— at the political power which keeps the capitalist class in their position of privilege and from which all else flows.

At the moment, in many capitalist countries, the workers have one of the essential tools for this—they have the vote. The capitalists fully recognise the importance of elections; that is why they at first opposed universal suffrage and why they now spend vast sums of money in hoodwinking the voters.

The other essential tool — socialist understanding — is at present lacking. And the way to stimulate it is not by spreading confusion, nor by opportunism, nor by provoking ignorance. There is only one way—the establishment and propagation of the case for the alternative society of Socialism.