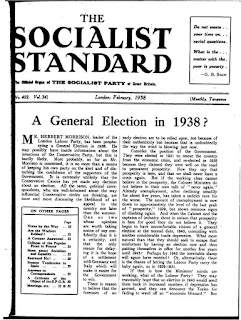 From the February 1938 issue of the Socialist Standard

Mr. Herbert Morrison, leader of the London Labour Party, has been prophesying a General Election in 1938. He may possibly have inside information about the intentions of the Conservative Party, but this is hardly likely. More probably, as far as Mr. Morrison is concerned, it is no more than a means of keeping his own party on the alert and of disturbing the confidence of the supporters of the Government. It is extremely unlikely that the Conservative Caucus has yet made any decision about an election. All the same, political correspondents, who are well-informed about the way influential Conservative circles are thinking, are more and more discussing the likelihood of an appeal to the country not later than the autumn. One or two whose opinions are worth taking notice of say confidently that it is a certainty, and that the only reason for delaying it is the hope of a settlement with Germany and Italy which will make it easier for the Government to win.

There is reason to believe that the forecasts of an early election are to be relied upon, not because of their authenticity but because that is undoubtedly the way the wind is blowing just now.

Consider the position of the Government. They were elected in 1931 to rescue the country from the economic crisis, and re-elected in 1935 because they claimed they were well on the road to permanent prosperity. Now they say that prosperity is here, and that we shall never have a crisis again. But if the working class cannot believe in the prosperity, the Cabinet Ministers do not believe in their own talk of “never again." Already unemployment, after declining steadily for about five years, has taken a sudden turn for the worse. The amount of unemployment is now down to approximately the level of the last peak of “prosperity," 1929, but shows ominous signs of climbing again. And when the Cabinet and the captains of industry shout in unison that prosperity is here for good they do not believe it. They begin to have uncomfortable visions of a general election at the normal date, 1940, coinciding with another considerable trade depression. What more natural than that they should seek to escape that misfortune by having an election now and thus putting themselves in office for another five years until 1943? Perhaps by 1943 the inevitable slump will again have receded ? Or, alternatively, there is the chance of letting the Labour Party carry the baby again, as in 1929-1931.

If that is how the Ministers' minds are working, what of the Labour Party? They may reasonably hope that an election in 1940 would send them back in increased numbers if depression has arrived, and they can denounce the Tories for failing to ward off an “economic blizzard." But what a spectacle of the unreality of capitalist politics! In 1929 we were at a peak of capitalist prosperity, but hardly anyone realised it. Instead of seeing that a slump was in prospect the childlike innocents of the Labour Party fought and won an election on a promise to abolish unemployment, and appointed three very special unemployment commissioners to do the job within the framework of the capitalist system. Up came the normal economic blizzard, unemployment rose to a record height, and the first casualties were the three special Commissioners (Thomas, Mosley, Lansbury), two of whom are now outside the Labour Party and the third highly critical of its policy. The rest of the Party are now not a bit abashed and are prepared to offer themselves again as solvers of unemployment and preventers of crises. Only this time, profiting by their past experience, they hope to launch their Government when trade is down and likely to go up, rather than at the top of the tide.

The one changed circumstance that both Government and Opposition can discover is that the currency is now “off the gold standard." Spokesmen in both camps proclaimed in 1931 that this difference was vital and that it alone would forever prevent a return to crises and depression. Already events have shown that the expansion and contraction of capitalist industry goes its normal way, on or off the gold standard—Socialists, of course, pointed this out in 1931. An election in 1938, brought about by the Government to forestall a big increase of unemployment, would therefore find the Labour Party—itself unable to prevent the last depression—trying to prove that the way to prevent crises is to be off the gold standard, and at the same time trying to prove that this had not prevented the coming slump!

The moral for Socialists is obvious. It is our task to expose both groups and drive home the lesson that Socialism is the only way to cure unemployment and the rest of the evil effects of capitalism.

No election was held in '38. In fact, with the war breaking out in September '39, there wasn't another General Election until 1945.