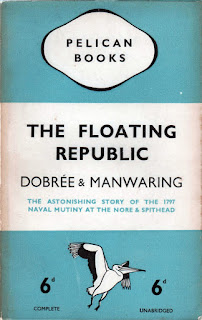 Book Review from the September 1938 issue of the Socialist Standard

"The Floating Republic" (Pelican Books, 6d.) should be read by all who desire to get a truthful presentation of sheer facts about the Spithead and Nore Mutinies of 1797. Deliberate suppression, distortion, misplaced emphasis: these have been the main instruments of historians writing in the interest of their class, or of the class to which they have prostituted, in many cases, their undoubted literary powers. It required centuries to reveal the fact that Thucydides (great Greek historian and no mean admiral) was more actuated by a desire to safeguard his interest in silver mines (2,360 years ago) than by Athenian “patriotism.” Macaulay’s touching picture of William of Orange’s affection for his joint-sovereign queen must be valued in relation to such facts as recorded in “Capital” (Vol. 1, S. Sonnenschein, p. 747; “Everyman,” Vol. 2, p. 801). Look it up. Compton Mackenzie’s blunt statement that Macaulay’s hero was a “homosexual” is not wholly irrelevant here. (“Literature in my time,” p. 82.)

A specific example of misstatement amounting to deliberate lying is afforded in the Rev. J. Franck Bright’s “History of England ” (Period III, p. 1195): “Under [Parker’s] influence, the demands of the mutineers assumed a political character.” He characterises the mutiny at Spithead as “wholly unpolitical.” Readers of the “Floating Republic” will be able to judge whether by any stretch of the word, “political” considerations differentiated the two mutinies—any more than at Invergordon “political” motives governed that very mild “mutiny.”

Bright also states that Lord Spencer, the First Lord of the Admiralty, “was met with nothing but insult.” Actually, Spencer refused to hear the men except through intermediaries, and “insult ” may be judged by the fact that, while negotiations were proceeding, the Royal Ensign was hung out on the King’s birthday; both at the Nore and at Spithead the mutineers were pathetically anxious to testify love and loyalty to their gracious monarch. In this connection, it is worth noting that George III “unreservedly concurred” in Spencer’s “express determination not to add to concessions already given.” What these “concessions” amounted to, readers of the “Floating Republic ” will learn for themselves. A petition to “His Majesty’s sacred person and Government,” backed to some extent by a captain of a ship, left His Sacred Majesty “ unmoved.” . . . When the game of Sacred Majesty jamboreeing with Boy Scouts is over, when monarchy is revealed once for all as a tawdry instrument of the capitalised class, we shall learn the real sentiments of the parasitic crowd circling round it—in the lifetime of not a few of us we have seen an Edward-the-Peacemaker’s warm friendship for the Gallifet, who found a fiendish pleasure in massacring working-class men and women who had dared to challenge the position of the governing classes in France in 1871.

Vague impressions of the brutality prevalent in the Navy at the time of the Mutiny—and persisting in its worst forms scores of years afterwards —should be replaced by clear knowledge. Of flogging : “Six blows tore the flesh horribly, after a dozen the back looked like so much 'putrified liver.' After a time the bones showed through, blood burst from the bitten tongue, and expelled from the lungs, dribbled through nostrils and ears. . . .” We apologise to those whom the catalogue of horrors in pages 67-69 gives a sleepless night. . . .

Impatient readers may ask: Why this recital of, and invitation to, nightmare horrors?

A quite pertinent question.

It is to emphasise several important facts which History has established. One is, that an exploiting class, despite all “humanitarian” pretensions, in the face of an alleged “Brotherhood of Man based on the Fatherhood of God,” or any other such meaningless formula, is, and of necessity must be, fundamentally brutal, based as it is upon force, especially in its relations to the exploited class. At the time of the Mutinies, the sweat and blood of men, women and children was being coined into the wherewithal to assist in contesting naval supremacy with France. Admitted scallawags and gaol-birds formed a goodly proportion of “Ye Mariners of England ”—the system manufactured this particular type of goods—it still remains that class distinction spawned also a breed of sadistic bullies who rewarded the rank and file protectors of their invested interest in the sea with contempt, with unspeakable conditions, with flogging, with keelhauling, and with downright theft (for details, see book, which, by the way, is most praiseworthily documented).

Another point emerging is that, faced with dangers arising from the Class Struggle, the capitalist class will stick at nothing—the lying allegation is often made at propaganda meetings that the Socialist Party of Great Britain refuses to face up to this fact. Clause 6 of the “Declaration of Principles” sufficiently refutes the allegation. Control of the “armed forces of the Nation” by a politically informed Socialist working class will not imply imposing march-pasts in Hyde Park with eyes-right to some giant “leader.”

Parker was hanged—Camperdown was won mainly by the sailors who left him to his fate. Whatever may have been his defects, Parker must stand high in the estimation of the Socialist worker. . . . There is no call for Parker martyrs, however, to-day. Since Marx’s analysis of society, the political position has been entirely clarified on broad issues. A Socialist working class will brook no “leaders,” there will be none, therefore, to sell out and there will, on the other hand, be none for the working class to leave to their unhappy fate.