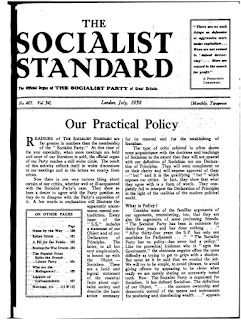 Will the Forty Fall for It?
It is Lord Beaverbrook’s boast that he allows much latitude to his writers and cartoonists— Low in particular—to say or draw what they like. This lands him often in the peculiar position of having the feebleness of his policies exposed by Low’s wit or some telling fact in an article. Recently, during a period of five or six weeks, his editorial arguments for national defence were blown sky high by displayed articles in his Daily Express. First came an article showing how “our" England is owned by a handful of landlords, so that not one in forty of us owns any soil in the land we call our own. Then came an editorial saying that it is only right and democratic that we should have conscription in war-time; every man should take part in national defence. Then this was elaborated in an article which assured the dictators that an attack on England would cause every man to leap to the defence of his native soil!

All of which boils down to this, that the 40 who own no soil are to be conscripted to defend the monopoly rights of the 41st. A very excellent doctrine for the latter, but a strange interpretation of democracy.

The answer of the workers to Lord Beaverbrook—and to the Labour Party advocates of “war to defend democracy"—should be a very determined declaration that they will be willing to defend their native soil when they own it and not before, and that in the meantime they intend to devote their whole energies to gaining possession.

The Slum Empire—New Landlords Want to Move In
In order to justify the seizure of the German colonies after the Great War the Allied Governments, their own hands red with the blood of natives slaughtered to protect profits, dwelt on the unfitness of Germans to administer colonies. They lacked, so it appeared, that inherited capacity of the Britisher to rob the native and make him like it at one and the same time.

Now come the West Indian troubles to upset the legend, at a very awkward time, too, just when the Germans are preparing to resume the “white man's burden."

Here are a few of the things said by Mr. Lloyd George in the House of Commons on June 14th, 1938, based on what he saw when he was in Jamaica last year:—


. . .  he spent over three months in Jamaica, and he was perfectly appalled at the conditions. He felt ashamed that we should have tolerated—and for a very long time—such a state of things under the British flag while we were boasting about our great Empire.
There was no language, however violent, adequate to describe the conditions (in Kingston, Jamaica).
In Jamaica wages were incredibly low—he did not know how the people lived and kept a family—and the housing conditions were indescribable. We did not want a slum Empire.

Promptly the German Press has drawn a moral in conformity with the desires of the German capitalist.

The official German newspaper, Diplomatic Correspondence, says (Manchester Guardian, June 16th) that the Jamaica disturbances prove that new blood is needed in the government of the Colonies —German blood, of course. The British Government shows “a lack of the right attitude towards the natives. . . . It is once more seen that the nation which likes to be called the first and oldest colonial Power in the world is repeatedly confronted with tasks with which it cannot adequately cope . . ."

How to Spell "Slump"
During the last industrial crisis a writer in The Socialist Standard jeered at the capitalists and their economic advisers because of their inability to learn anything from a crisis or a dozen crises. Always they cherish the same illusions and twitter about the same "remedies," only to discover afresh each time that the permanent prosperity they believed in had crashed again.

We owe our masters an apology. They really have learned something new and refreshing this time. It consists in the remarkable discovery that there will never again be a slump because slumps are in future to be called “recessions."

"Basic Incomes": Another Effort to Reform Capitalism
An organisation called the Society to Promote Human Equality has published a pamphlet on “Basic Incomes," which contains for its size (16 pages) a remarkable amount of error and confusion. The scheme, one which has appeared before under various names, is that each individual should receive from the Government an income of 4s. a week; the amount to be increased later on. It would be paid to everyone, from millionaire to pauper.

The authors discuss such questions as the way the money will be provided and the likely effects of the scheme, but are so delightfully vague about everything that it is a little difficult to pin them down. In their own words, the scheme is "experimental" and we would have to wait and see what result it produced.

An example of their vagueness is the following statement on raising the money: —

How is the money to be found? Three ways only seem to present themselves: (a) By taxation; (b) By the creation of currency or credit; (c) By profits arising from publicly-owned industries. We are concerned mainly that the money should be found by one, or by a combination of the three methods, (p.6.)

The writers are not quite sure whether there are only three ways of doing it, and they are even less sure which way they will use, so they are concerned (but only "mainly") to do it by one, or possibly by all three, of the ways.

They are equally unsure of the effect. They recognise (page 8) that when the worker gets his 4s. per head of his family, his wages may be reduced as a consequence, but, they add, “the cost of production would be reduced, prices would be lower, and real incomes would advance." They leave out of account the more obvious conclusion that, if an employer is able to reduce his wages bill, his profits will be correspondingly increased.

In short, the scheme is an example of the futility of trying to cure a disease before understanding it. The writers live in an abstract world and do not know the real one, in which wages roughly correspond with the workers' cost of living. They do not know that the workers must be kept poor, otherwise they would not work to produce profits for the capitalist class. They do not see that subsidies paid by the Government to supplement wages only result in bringing down the wage level correspondingly, yet this was well enough known a century or more ago, when the practise of subsidising agricultural wages with poor relief was common.

The Man Who Did Not Know When To Be Cruel To Children
The military mind is a remarkable thing. An aircraftman who made his seven-year-old son pick up hot coal has been dismissed. For being cruel to a child? But surely that is what aircraftmen are for! Bombing planes are kept precisely for the purpose of slaughtering children’s fathers in foreign air forces, destroying homes, and maiming mothers and children wholesale. Of course, “our" Air Force, like all the others, will protest with their hands on their hearts that they are only for national defence, and that they will only bomb military objects and points of use to military forces. But as that includes railways, factories, roads, bridges, food supplies, etc., etc., and as nobody but a fool believes that bombs can select their targets, the truth is that all air forces are babykilling brigades. Imagine what would happen in war to this particular aircraftman if he returned from a raid with his bombs not thrown, with the excuse that he could not be sure he did not hit some enemy child.
Edgar Hardcastle
Posted by Imposs1904 at 9:03 PM