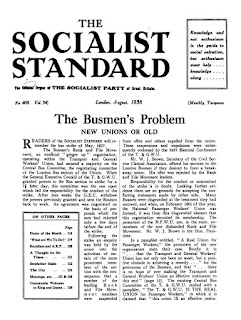 From the August 1938 issue of the Socialist Standard

“The great march past was extremely impressive, every section of the fighting forces in full equipment, telling of millions of others, ready on the instant to spring to the defence of The Fatherland.”

A few facts (mainly derived from Soviet sources) will assist the reader to glimpse what this ”Fatherland” means for the Russian underdog.

It is difficult to convey to the average reader the obstacles which are deliberately placed in the way by the Soviet Union to prevent the truth leaking through; there is, after all, a long tradition among the governing clique in Russia of hiding facts skilfully; even the cute Catherine “the Great” could be taken in as to the real condition of the peasantry by her cunning ministers (all the sinister features of the Soviet regime have their roots deep in the past). Sheer weight of suppression of free speech and a rigid censorship of writing, eked out by shameless misrepresentation in other countries by their respective “Communist Parties,” renders the task of getting the truth across an exceedingly difficult one; it must be grasped that branches of the "Comintern” outside Russia are, in effect, contingents of the Soviet Foreign Office. It is not generally known that the Daily Worker repress advertisements of the Socialist Party, and even of an organ like Controversy, which, at any rate, opens its columns to all parties, including the Communist Party; as significant a straw is the fact that "Intourist” visitors to Russia have to undertake not to stray from a very strictly conducted fold.

But the truth is gradually seeping through. André Gide, a foremost man of letters in France, was prepared four years ago “to die for the Soviet Union”; to-day, on revisiting Russia, he writes: ” It was the steepness of your bluff which made the downfall of my confidence.” BLUFF!!

A member of the Communist Party, at a meeting on Clapham Common last year, said to a speaker of the Socialist Party, on being cross- questioned : —

"We’ve got to bluff the people” (was he “purged” for blurting out this naive admission indicative of the general outlook of his party ?).

A few outstanding indications of what “Fatherland” means for peasant and proletarian: The News Chronicle of January 4th, 1936, reproduced a photograph of “12-year-old Mamulokat Nakangova, wearing the order of Lenin, which she has received for harvest work during her holidays, addressing a meeting in Moscow." Do the daughters of Kalinin and other surplus-value eaters harvest during holidays? Kalinin (alive up to date) cabled condolences to Queen Mary on the death of George V.

A French miner (Kléber Legay) visited Russia. His report appeared in the Daily Telegraph, December 13th-16th, 1937. (It is simply silly to snarl Daily Telegraph!! Are the facts recorded by the President of the Miners' Union true? Has any refutation been attempted? Motives for inserting report by D.T. are irrelevant.)

“On the way to the Red Square we passed crowds of people, most of whom were poorly dressed, while many were dirty.
“Everywhere there were representations of the genius Stalin.” (Visitors to Paris Exhibition last year will call to mind the impossibility of being out of range of Stalin’s mug in the Russian Pavilion.) J. C. Taylor, in Popular Psychological Fallacies (an excellent book), gives evidence of the hysteria produced by this leader worship (p. 187). He quotes “ the poet Kazak Djambul": —

There is none left with whom the writers can compare thee.
The poets have no longer enough pearls to describe thee !

O great Stalin, O ruler of the peoples,
Thou who did’st curse mankind to be born
. . . Thou sun reflected by millions of hearts, etc.

Which, as Bret Harte remarked, “is coming it strong,” but, as J. C. Taylor comments: “These are the words not of genuine poets, but of men who are terrified into irrational behaviour.”

Disappointed with the dwellings of the “rulers of their country,” the deputation decided to forgo any more visits, but on pressing they consented. “Our visit was a shocking disappointment.” Legay (troublesome fellow) asked a few questions on his own. “What do you eat?" Miner to wife: “ Show these comrades the stewpot.” With great reluctance the contents were revealed: beetroot leaves and potatoes with a little lard. “He refuses to eat it,” added the wife. Discontented, unpatriotic brute; shortly after, the officials “explained” : “The man was drunk”—a son of Belial, flown with insolence and — beetroot juice.

Yvon’s “What Has Become of the Russian Revolution" (One shilling; order from 42, Great Dover Street) should be read by all who desire to learn the facts. A manual labourer, eleven years' experience in Russia and an ex-Communist, he writes with knowledge.

Poor little Kama apparently worked voluntarily during her holidays; the fathers of the Kamas "have to implore their bosses for permission to work during their vacation. . . . We know old fellows who have laboured 50 years in the same factory in Moscow and now get 35 roubles as retirement pension, the price of two kilos of butter." The merry “homes" of Moscow: “In Ural the complaint in every house is 'bed-bugs, bed-bugs.' "

There is a tale told at teachers' meetings of a child in a poor school who refused a picture for a prize because he had no wall to hang it on: his family occupied the centre of a room. They manage these things better in Moscow. Frequent advertisement in newspaper: “ Wanted, an angle” said “angle" being a corner of a “common" room.

Russia’s “houses of rest" for “the people" bring painful memories to some of certain “convalescent homes" in England—the advantages, on the whole, however, being certainly not on the side of Russia. Dormitories contain 30 to 40 sleepers. “You dare not tarry too long on the beach for fear of losing your meal or being disciplined." The final end of “rest" for the people is set forth in a pamphlet issued by the Soviet “trade unions": “The repose of our Socialist worker ought not to be the old 'rest after labour.' but should be transformed into ‘rest for labour, rest for the raising of the workers' productivity'." Sounds very reminiscent of our old friend “Rationalisation,” “Business Efficiency," carried to the n'th degree, but Russia To-day assures us that the bug-ridden homes, eked out by semi-penal "homes of rest," are “the lot of those who toil and dictate to those who don’t."

Little Kama chose her father unwisely. Had she chosen a Stalin, a Molotof, a Vorosilhof, or even a “specialist” worker, she could have shared in sumptuous apartments, “furnished with a special housemaid’s room.” (Note that wages range from 20,000 roubles down to 80 roubles.)

Would the process of “Building Socialism" by the Communist Party of this country entail penalisation of the Kamas for the benefit of the great-brained Pollitts and Gallachers?

Claims for a general wide-spread, all-round amelioration of conditions for the worker must be received with the utmost caution. Yvon asserts: “The Russian worker under Tsarism had simple but plentiful fare, foodstuffs were cheap, daily he ate his food and kasha; he had sugar, lard, tea and good bread in large quantity.” Acquaintance with Russian novels, let alone works of economic writers, like Stepaiak, will bear this out.

The Socialist Party of Great Britain stands four square upon the belief that Socialism can only be attained by a working class invincibly strong through Socialist knowledge; all its activities are directed towards the spreading of this knowledge.
Reginald.

Blogger's Note:
There was a follow up to this article in the December 1938 issue of the Socialist Standard, where a reader in Manchester took exception to some of 'Reginald's' statements.

I retained the original spelling and format of the article as it appeared in the Socialist Standard.

I'm presuming the 'Kalinin" mentioned in the article is in fact the Kremlin. The internet doesn't help me out here, and I can only guess that that was an alternative name for the Kremlin in the '30s.

42, Great Dover Street was the address of the SPGB Head Office in 1938.