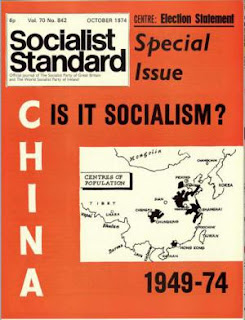 From the October 1974 issue of the Socialist Standard

It has been argued, in opposition to the case of the Socialist Party of Great Britain, that an analysis of working-class struggles shows that the setting up of Workers’ Councils is the way to success in the struggle for Socialism. The “evidence” cited in support of this idea is:

It is urged that revolutionary political parties merely re-iterate a series of abstractions and wait for the workers to eventually accept them, whereas taking part in workers’ struggles, for which Workers’ Councils are formed, educates workers through “day-to-day” experience. The notion is by no means a new one. It goes back to the formation of the Communist Party, the Communist International and the Russian Revolution in 1917.

As a result of the effect of the Russian eruption a “Conference of Workers’ and Soldiers’ Councils” was held in 1918 at which people like Ramsay MacDonald and Philip Snowden had proclaimed their support of workers’ councils. On July 31st 1920 the Communist Party of Great Britain was formed, based on the following resolution:

For the Soviet (or Workers’ Council) system as a means whereby the working class shall achieve power . . . they declare the Dictatorship of the Proletariat as a necessary means of combating counter-revolution. (Report, Foundation Conference, CPGB 1920).

In the same year the Second Congress of the Comintern had concerned itself with the German question, and the problems of getting Continental “Left-Wing” Social Democrats to form Communist Parties. But the main discussion, led by Zinovieff (in his capacity as President of the Comintern) was to convince and overwhelm the British delegates (Gallacher, Murphy, Ramsay, Jack Tanner, Dick Beech) of the necessity for a political party. For several weeks, one after another, from Lenin downwards (and Lenin had written about it in Left-Wing Communism) the Russians pounded and pummelled the poor British delegates with argument after argument, fact upon fact, to prove the indispensability of organizing a political party.

Those Comrades who take a stand against the necessity of a party sometimes consider themselves a Left opposition. It is not Left, but just the other way. The propaganda against a workers’ party is a capitalist trick. Don’t all good capitalists support their parties as soon as they grow up ?

squeaked Zinovieff at them. The Soviets (Workers’ Councils), he said, do not take the place of the party; they presuppose it.

I tell you the party has been our guiding star . . . the advanced Russian worker cherishes the party as something sacred. (Report of the Second Congress of the Communist International 1920).

Highly interesting was the comment of Jack Tanner, chairman of the Shop Stewards’ movement and later president of the Engineering Union:

The main point of Zinovieff’s argument was the absolute necessity for a strong disciplined Communist Party and also that the Dictatorship of the Proletariate is synonymous with the dictatorship of the Party. He has not clearly proved his argument. What has taken place in Russia must not be set up as a model for all other countries. In England, we are sure, things will be quite different. (Report of the Second Congress, Comintern).

As editor of the Trade Union opposition paper Solidarity he was evidently well aware of the articles on Russia in the Socialist Standard. What Lenin and Zinovieff were arguing, therefore, was the imperative necessity of a political party to take political power.

What we have now however is the claim that “times have changed”, that a large number of workers are “white collar” hands, and that the numerous cases where Workers’ Councils have emerged in Germany, France, Spain, Italy, Poland, Ireland etc. show the necessity for enlarging these councils to include “everybody” on any and every qualification or pretext — Old Age Pensioners, Tenants, School-kids, Squatters. Once this happens of course it is no longer a Workers’ Council in the old sense of the Russian Soviet which claimed to be Proletarian Democracy by excluding “parasites”, the sole qualification for representation being what International Socialists still called “workplace delegation”. This could only be a loosely federated political party calling itself “Workers’ Council”, somewhat like the Labour Party with its nebulous “affiliated” membership (half of which is moonshine) advocating contradictory reforms, and a constant hotbed of internecine struggles between opposing sections or factions.

One delusion concerning political power had its origin in the abortive Spartacus “putsch” in Germany in 1918, and the curious myth that the German ruling class suspended or rebelled against Parliament by organizing the so-called “Freikorps.” Nothing is farther from the truth. The Spartacus episode was the Comintern’s most disastrous and irresponsible stunt — so bad that on learning the sorry facts the ECCI sent telegrams calling the revolt off, after a few hundred German workers had gone to their doom.

In fact the Freikorps was recruited, paid and ordered by the German Social-Democratic Government. Their political commander was Gustav Noske (Ebert’s “bloodhound”), and the first thing Ebert did was get the support of the Army Supreme Command. This was decisive; Ebert promised the Berlin Workers’ and Soldiers’ Councils elections for a Constituent Assembly (which never materialized). On January 11th Noske’s volunteers crushed the Spartacus putsch in the name of Parliament, the Constituent Assembly. The Weimar Republic was proclaimed. And what had this to do with Socialism? Nothing. The German workers were Social-Democrat-Liberals with a few Marxian phrases: reformists.

The criticism of parliamentary activity — that it discourages activity by delegating power and therefore encourages passivity — can apply equally to unions or Workers’ Councils. Without the consciousness of Socialist workers they are just as reactionary, leader-dominated, and ineffectual without political power. But above all, support for Workers’ Councils against Parliament means the dissolution of the Socialist Party, and in fact, the demise of Socialism. Its one-time members would be swimming aimlessly in a flood of Squatters, Claimants’ and Pensioners’ “demands" not knowing which to support first or most.

Why is the only form of organization which can take political power a political party ? Because only a party based on individual conscious voluntary membership, where every member knows the aim and understands it, can operate unitedly for it. The actual work of Parliamentary activity will build a Socialist membership in the localities which will dispel confusion by debating the mistaken views of reformers. This is no set of permanent abstractions The abstractions are applied to life by party activity. The establishment of Socialism is the work of the working class as social man, irrespective of trade or profession.

In every instance where neo-Communists have tried sporadic revolts for limited objectives with workers’ councils, it has ended in disaster. Socialism is the political interest of the whole working class, and only represented by a political party.
Horatio.
Posted by Imposs1904 at 10:32 PM

I think this article is a bit mistaken

There was no abortive putsch but a reaction and response to a move to eliminate the left-wing opposition. The Spartacus were reluctant participants when they joined the revolutionary shop steward movement in resisting the Freikorp.

Unlike 1921 March Days and the events of 1923, i dont think Comintern had much say in what took place.

There was the Kapp Putsch of 1920 where the SPD government fled and the trade unions under Karl Legien, a moderate, called the general strike that handicapped the Putschists demonstrated i think the power of the majority which the Spartacist did not possess in 1919.

"...It was becoming evident that the new regime faced strong opposition among the German population. The response of army units outside Berlin had been mixed, some supporting the coup, some remaining loyal to the Ebert government, and others waiting to see how things would turn out. Many regions of Germany refused to acknowledge the authority of the Kapp Government, and in places fighting broke out between army units and anti-militarist leftists. Within a short time, and in spite of the absence of newspapers, word of the general strike call spread, and the work stoppage in Berlin became almost universal. There were no trams, and by noon the bus and subway services ceased. In the evening, the city was dark, and all hotels and restaurants were closed. Gas, electricity and even water supplies were lacking; newspapers did not appear, and only the telephone service remained. Even the telegraph clerks at the Berlin Post Office refused to heed the Kappists’ authority.. Against this background of general disintegration, the Kappists’ slender authority was ebbing away...The attempt to run industry and cow the populace merely by an overwhelming display of brute force was already palpably failing in its aim. Members of the Kapp Government recognized that the Putsch was as yet upheld only by the military and advocated negotiation with the workers’ committees. Other members called for ruthless action against the strikers...despite the threats of dire punishment, the strike spread until practically all rail traffic in the country was paralyzed and communications interrupted or severely affected everywhere.
Since most of the ministerial bureaucracy refused to cooperate with the Kapp Government, and since the protesting workers and employees had brought the whole economy to a standstill, the failure of the coup was already foreseeable...The industrial Ruhr region, for instance, had been completely paralyzed, a fact that worried the Putsch leaders in Berlin and made them question their ability to maintain control. Some of them suggested simple and brutal measures: shooting the trade union leaders and striking pickets, and forcing striking workers to go back to their jobs by the threat of a similar fate. Kapp and Lüttwitz were however unwilling to unleash the military on German citizens, especially on the people of Berlin. The Putschists could not count on the troops anyway, since the vast majority of them had lost hope in the Putsch leadership in Berlin..."