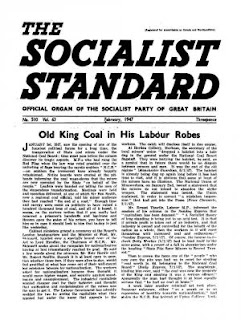 From the February 1947 issue of the Socialist Standard

Mr. Morrison is fast giving Politics a definite entertainment value. Time and favourable circumstances may yet link him with A. P. Herbert in the dual role of fellow M.P. and fellow humourist

To show we do Mr. Morrison no more than bare justice, consider a statement from his speech at Birmingham, Oct. 26th, “That the Labour Party does not propose to abolish the profit motive” (Observer, 28/10/46). Compound this with his repeated assertion that the Labour vote was a Socialist vote and there is concocted the rich, ripe, fruity humour that a Socialist is one who believes in the common ownership of the productive sources operating through production for use and based on the profit motive. One can almost visualise the pages of Marx’s “Capital” curling up at their edges with laughter.

Mr. Morrison’s whimsical humour is illustrated in his droll statement: “That the profit motive has been used as an excuse for exploiting Labour and treating workers as a commoditv and not as people.” But Capitalism is a system which produces commodities for sale with a view to profit. The worker’s labour power being the only thing he possesses for getting a living, it is this he must seek to sell on the so-called labour market. It is thus a commodity. The capitalist buys this commodity in the form of wages, these wages being on average its value or the sufficiency of things necessary to sustain and restore the worker’s productive energies. In the consumption of this commodity, labour-power by capital, however, a value greater than its own is produced. This unpaid labour or surplus value is the sole source of capitalist profit. This social economic process is included by Mr. Morrison under a single heading—“excuse.” Seeing, however, the employing class treat labour power as a commodity, because it is a commodity, and exploit workers because exploitation is the only method by which profit can be made, the excuse must be allowed. The question which seems to be most pertinent here is what excuse can be made for Mr. Morrison? We are inclined to the view that this is a more subtle form of Morrisonesque humour, and, if so, it leads inescapably to the conclusion that the technique of Marx (Harpo) has been closely studied by him.

Although Mr. Morrison is not desirous of changing the commodity status of labour-power, he at least wants it called by another name, for he said: “In future Management must recognise Labour as a service and not as a commodity.” To a possible objection that this is a distinction without a difference, it may be argued that it is at least a way of looking at things. To steal a man’s clothes while be is bathing may be an act of common theft, but to leave behind a message that a bathing costume covers him just the same as clothes does reveal a certain delicacy of feeling and shows that he is at any rate a somewhat uncommon thief. Whether, of course, the employing class will submit to this fundamental change or seek to impede the march of progress by every means within their power cannot as yet be said, but we feel sure that if they won’t change the name Mr. Morrison will fight to secure this historic act of class justice with every Socialist fibre in his revolutionary being.

It appears, however, from Mr. Morrsion’s following statement, that the something for nothing postulate is as inapplicable to the world of Labour politics as it is to the world of physics, for Mr. Morrison warns the workers “that the new status involves new duties as well as new rights.” “Take unemployment pay,” he said. “ How long is a worker who has been doing some particular job entitled to live on the contributions of his fellow workers rather than take a job of another kind under proper conditions or a job in another place? ”, which, put in another way, seems to pose the question, how soon will an unemployed “new status holder” be compelled to seek or take a job outside his own trade (involving, as it generally does, a lowering of his customary pay-rate) before being cut off Unemployment Insurance benefit? Or again, how soon will penalties operate subsequent to his refusal to take a job elsewhere? Elsewhere being, perhaps, as it has been in the past, a distance involving hundreds of miles. In view of the not remote possibility of large scale unemployment, the answer is of some importance to sellers of “services.” Mr. Morrison, as a member of the Government, may, of course, have some information on the subject, and so we would put the question to him by asking, how long do you think, Mr. Morrison, should be the period of non-compliance with such conditions before the “service seller" is deprived of unemployed pay, under the “not genuinely seeking work clause? ’’

Although Mr. Morrison seems blithely unacquainted with the way profits are made, he has, it would seem, a nonconformist conscience as to where they are made. For instance, he tells us “that at a time when people were living in slums, without enough to eat, the profit motive was fostering a boom in the building of luxury flats and dog-racing tracks." Both he regards as a form of misdirection of national resources into non-essential work. But starvation and slums have existed and persisted in the industries Mr. Morrison calls essential in their most booming periods. In fact they have been associated with Capitalism even in its remote pre-dog racing track period. Mr. Morrison must be aware of the fact that poverty, slumps, unemployment and economic insecurity have been permanent features throughout the whole course of present society and can no more be traced to the dog race tracks at Harringay or Wembley than they can on the pedigrees of the greyhounds who race there. The general poverty of the working class and the vast accumulation in the hands of the Capitalists is not due to misdirection of wealth resources, but to the class appropriation of the products of labour as a result of class ownership.

For that reason the profit motive is, in its profit motive propensities, coarsely promiscuous and makes no virtuous discrimination between non-essential and essential industry. Any encouragement of an anticipated profit yield from any enterprise, whatever its character, will lead to its becoming susceptible to the arduous advances of the profit-seeking passion. Mr. Morrison will, as his intimacy with the profit motive ripens, also discover it in due course.

When Mr. Morrison spoke in the same speech of Socialising the profit motive he was back to his old sparkling form. The profit motive being the personal incentive for investing capital in some enterprise for profit expectation, to speak of Socialising it is tantamount to decreeing that henceforth and hereinafter all vocal soloists must perform their respective efforts only through the medium of community choruses. This is political fun at a very high level, and such is Mr. Morrison’s control over his subject matter that he never relaxes from the gravity he is able to impart to such utterances, and which give, as a result, such zest to the humour of the occasion.

In a remoter period of Labour polities the presentation of the employing class much favoured by their cartoonists was a brutal-looking, treble-chinned plutocrat who was consistently using the prostrate body of the worker as a parking place for his posterior. That conception has apparently outlived its usefulness, for Mr. Morrison tells us that if the profit motive recognises its past abuses, such as investing money in dog-racing track building, price fixing by cartel formations and the non-oppression of Labour, then it will have an honourable part to play in Society. Evidently Mr. Morrison is about to authorise a new version of the Capitalist for Labour cartoonists, that of a conscience- stricken, white-haired old gentleman who, goaded by the reproachful ghost of Mr. Morrison, is only too anxious to assume the role of the capitalist reformed Scrooge to u working-class Bob Cratchit. One observes here an element of pathos in Mr. Morrison’s humour.

In view of all this it is perhaps not wholly surprising that Mr. Macmillan demanded to know, of Mr. Morrison whether he was a Socialist? (Manchester Guardian, 19/10/46) and in the same speech asked Mr. Morrison to take hie courage in both hands and come over to what he described as the progressive Conservative and Liberal tradition as Chamberlain and Snowden had done in times past. Mr. Morrison, in the House of Commons (20/11/46), courteously returned the invitation by asking Mr. Macmillan, in view of the strong Socialist flavour of the speech he (Mr. Macmillan) had just made, and in view of the dissent it seemed to cause on the benches behind him, “how long the right hon. gentleman would be sitting there " (Ministerial laughter) (Times, 21/11/46). As Mr. Macmillan and Mr. Churchill have, as Mr. Morrison said, both advocated the Labour Party’s programme in the past, the question of who is converting whom is a little misty. As for the precise nature of the conversion, it is securely hidden in an impenetrable fog.

As for the present system, it assumes for Mr. Morrison the aspect of “an unsubstantial pageant faded,’’ for he referred to Capitalism and Imperialism as obsolete labels (Observer, 29/10/46). Such obsolete labels have their use, however, when they are stuck on the political wares of Mr. Morrison’s party and sold successfully at Election time. The “Socialist" Morrison here exhibits gifts, it would seem, of a born leg-puller as well.

To sum up, Mr. Morrison’s desire to perpetuate the profit motive is merely the tardy semblance of their compulsion to perpetuate Capitalism. Elected by working-class voters who merely desired to see the Labour way of running the present scheme of things, given a chance, it could not be otherwise. Only a Socialist working-class electorate will demand Socialism. Thus the long-promised indictment of Capitalism, couched in the vague pseudo-Socialist phrases of Labour ideologies, collapses. Before a mass jury consisting of a Labour majority the charge is reduced to Capitalism, being let off with a mild caution and a weak exhortation to try and behave better in future. Those of the Labour Party who have sought to pose as prosecuting counsel against the present order have now, when administering it, to go over to its defence. Thus the case for the prosecution breaks down, the spectacle of His Majesty’s Labour Ministers entering the political witness box in order to turn King’s Evidence has become almost a matter of routine procedure.
Ted Wilmott
Posted by Imposs1904 at 2:47 AM