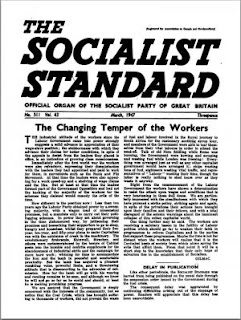 From the March 1947 issue of the Socialist Standard

On Sunday in Christmas week the Rev. Donald Soper unloosed himself on the air. He claimed that the Bethlehem Boy-God, “Very God of Very God,” was an established historical fact, and that basing himself on this “fact” the Christian can cease to plague himself with anxieties arising from a grim present reality and a desperately bad Future Outlook.

Now the reverend gentleman acquired somewhere the imposing degree of a “Doctor of Divinity.” One might assume that his course of studies included a nodding acquaintance with the views of an ever-growing number of his more or less loving fellow-Christians (including a formidable array of D.D.’s) views which definitely point to grave doubts, to say the least, about his undoubted “historical fact.”

Outside the Bible, evidence is limited to the sorriest ha-porth of Tacitus and Josephus for establishment of the monstrous “fact” of the very existence of the New Testament "Jesus."

In “The Christian" Faith” (Religious Book Club) Canon Mosley writes regarding the Bible, “Its nature as the Word of God is not open to demonstration.” Our Kingsway hot-gospeller bases his assertion almost solely on the “Word of God,” playing the game of “open your mouth and shut your eyes and see what God will send you,” which we enjoyed in our early youth.

The “Encyclopedia Biblica” is not encouraging. Professor Bruce (D.D.) accords to the Synoptic Gospels "a considerable measure of historical worth,” and his estimate of Jesus is not enthusiastic: “The words of Jesus concerning the future show limitation of vision.” Tut, tut! After millions of Christians have chanted in unison, “ Light of Light,” “Very God of Very God.”

But for something more up to date than the E.B.: An imposing array of learned members of the Church of England spent, on and off, 15 years in an attempt to reach some degree of common assent to doctrine. The results of their labour were published in 1938. (Curious to reflect that at the same time Neville Chamberlain was making futile efforts to find common ground for peace conditions in the political field among states insecurely anchored to the treacherous sands of capitalist contradictions.)

“Doctrine in the Church of England ” (S.P.C.K., 2s. 6d. pre-war) is a remarkable document which all Socialist writers and speakers might well study. The introduction, by William Temple, late Archbishop of Canterbury, is a masterpiece of vague verbiage. “We have interpreted our function as solely theological and not in any sense judicial” is a typical utterance.

On page 82 we read, "The subject (Virgin Birth) is one on which the historical evidence by itself cannot be other than inconclusive.” Indeed, “There are some among us who hold . . .  that our Lord's birth took place under the normal conditions of human generation." One of the mighty pillars of the Church, St. Augustine, would have supported sentence of death against “some among us” for this clear denial of Creeds and Catechism. We draw the Reverend Soper’s attention to a deliciously naive remark of Canon Mosley’s (E.B.), “There are two independent traditions, Luke’s may be said to represent Mary’s point of view, Matthew’s that of Joseph.” In short, a choice between “ Mary, Mary, quite contrary,” and “ Poor Old Joe."

These Christian apologists leave about as much of the Christmas Carol Babe as Lewis Carroll left of the Cheshire Cat.

Now as to the second claim of Soper, that the Christian can bury all anxiety, present and future, in the deep cup of Faith. What does it practically amount to? The smug, self-satisfied sentiments of a priest finding refuge in escapism. It may be “unphilosophical,” but it is infuriating to contemplate that this stuff is shed over a comfortable Kingsway congregation, is in a more or lees degree retailed to school children, full-proof in “Church” schools, considerably under-proof in the “Undenominational” school; it is melancholy to reflect that but a comparative handful of teachers have contracted out of partaking in the “Act of Public Worship” forced on to children.

The Socialist Party of Great Britain has never made the attacking of religion a main objective. Our opposition to capitalism covers the ground. Our Party is the only political body which has issued a reasoned case against religion, “Socialism or Religion” (incidentally, probably our best seller, though now unfortunately out of print).

Only in the new world of Socialism, untroubled by the terrors of religion, will the poet’s dream of childhood “laughing as it goes,” be realised in actual fact.

In the original article, the following passage had mention of Austen Chamberlain, rather than the amended Neville Chamberlain in the article but, as the reference is to '38, it must have been Neville:

"The results of their labour were published in 1938. (Curious to reflect that at the same time Neville Chamberlain was making futile efforts to find common ground for peace conditions in the political field among states insecurely anchored to the treacherous sands of capitalist contradictions.)"