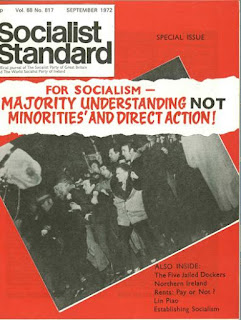 From the September 1972 issue of the Socialist Standard

Recent comings and goings among British politicians are as nothing compared to the convulsions that have been taking place over the past year in the ruling class of China. An official statement made by the Chinese Embassy in Algiers (see the Times, July 29) has confirmed that Lin Piao, formerly the officially-designated successor to Mao Tse-tung, was killed in a plane crash last September while fleeing to Russia after an unsuccessful attempt to assassinate Mao.

A “Communist’' from his young days, Lin Piao seemed to possess all the qualifications needed for the assumption of supreme power. He had taken part in the Long March of 1934-5, when the remnants of the Red Army marched eight thousand miles to a new base in the north-west. After the surrender of the Japanese, he was instrumental in defeating the Nationalists in Manchuria, thus paving the way for the Communist conquest of the entire country. Despite ill-health, Lin was in 1959 appointed Minister of National Defence; as spokesman for the army, he played a prominent role in the Cultural Revolution, when the Communist Party machinery was virtually destroyed. Indeed, with the disgrace of Liu Shao-ch’i, Lin became second in rank only to Mao Tse-tung: the high point of his power appears to have been marked by the draft of a new Constitution (which became available in Taiwan late in 1970), which declared Mao to be head of state and Lin Piao to be his successor.

This Constitution, however, was never adopted. From the later months of 1971, Lin’s name disappeared from public mention, and the Little Red Book of Quotations from Chairman Mao Tse-tung, to which he had contributed the foreword, slipped into the background. If the recent Chinese reports are reliable, Lin, perhaps disappointed and impatient on account of Chairman Mao's longevity, plotted, with his son as accomplice, to assassinate Mao. When the plot was discovered, Lin attempted to escape to Russia: whether the fatal air crash was an accident or not, remains uncertain.

There is no doubt that Lin’s death is part of a continuing struggle between the political and military bosses of China. As far back as 1938, Mao had written:


Our principle is that the Party commands the gun, and the gun must never be allowed to command the Party. (“Problems of War and Strategy”).

According to Victor Zorza, however (Sunday Times, July 30), the real point at issue is whether or not the Chinese economy shall emphasize agriculture or heavy industry. The Chinese press has been criticising the Lin Piao clique for wishing to spend too much on modern-style armaments, and Zorza believes that such newspaper statements constitute “a new attack on China’s military industrial complex. . . . Were such policies to be applied, the authoritative Peking party journal Red Flag says, the upshot would be that agriculture lagged behind, while industry ‘especially military industry, could develop abnormally’.” So for the time being at least, it seems, Chinese capitalism will aim to devote more resources to feeding its wage slaves than to expanding its industrial production.

And the lesson of all this for socialists — and indeed for all workers? Only that quarrels within the ruling class, wherever they occur, are of no concern to ordinary men and women. While the Maos and Lins of this world do their best to run things for their own benefit, the workers may be able (perhaps even in a dictatorship like China) to gain short-term advantages by playing off one faction of the ruling class against another. But they should never forget that their real interests lie not in supporting one or other set of rulers, but in establishing a world-wide democratic system of society, where there will be no ruling class and no oppression of man by man.

Before you ask, I retained the spelling from the original article. (You'll understand what I mean if you click on the links.)