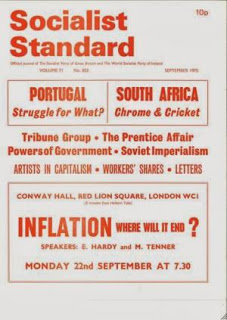 From the September 1975 issue of the Socialist Standard

In the slanging match between China and Russia for the ideological leadership of world falsification of socialism, China accuses Russia of being an Imperialist country and pursuing an imperialist policy. Like all so-called communist countries they rarely define what they mean by the terms they use. The Russians for their part deny that they are a capitalist country, and much less have reached the “stage” of Imperialism.


“Capital pre-supposes wage labour; wage-labour pre-supposes capital. They condition each other; and bring the other into existence.”

That Russian economy is based on wage-labour is undeniable — all workers receive wages — except perhaps those in the slave labour camps; therefore their system is capitalist. Now let us consider if Russian capitalism has reached the stage of “Imperialism — the highest form of capitalism.”

Lenin wrote a lot of rubbish and most of it was personal vituperation against Kautsky and others — in fact his method seems to have been to attack anybody and everybody who disagreed with him. He did however in his more lucid intervals write something worth reading. One of his books Imperialism — the highest stage of capitalism, gives a complete definition of Imperialism so that there can be no doubt whether Russia is an Imperialist country. The thesis conveyed in the title of the book is mistaken, in fact. Imperialism is not a phase in the development of capitalism in this and that country, but something which goes on all the time. Lenin was identifying it with its pre-1914 forms (so far as West European countries were concerned) of colonial rule.


Lenin defines Imperialism as five things which happen to be the headlines of the first five chapters of his Imperialism. These are: 1, the concentration of the production and monopolies; 2, the banks and their new rôle (that is the fusion of the banks with industry; 3, financial capitalism and financial oligarchy; 4, the export of capital, and 5, the division of the world among the capitalist powers.

Russia has long reached monopoly production and the state has fused the banks with industry. But the most important point is the export of capital for it is here that a capitalist country gains interest through exploitation of the workers of other lands. Lenin wrote in Imperialism:—

As long as capitalism remains as capitalism, surplus capital will never be used for the purpose of raising the standard of living of the masses, for this would mean a decrease in profits for the capitalists; instead it will be used to increase profits by exporting the capital abroad, to backward countries. In these backward countries profits arc usually high, for capital is scarce, the price of land relatively low, wages are low, raw materials are cheap.

After the second world war the USSR has become one of the biggest creditor countries in the world. Between 1945 and 1972 economic aid in the form of 2% or 2½% loans to be repaid as a rule over 12 years has been advanced for 786 enterprises in developing countries; the latter including loans (in one million old roubles), India 2,500m; Egypt 2,300m; Iraq 550m; Afghanistan 480m; Indonesia 443m; Argentine 400m; Ethiopia 400m; Indonesia 140m; Cuba 100m. US $. 76% of the aid is for industrial development and 14% for agriculture and transport. Over 400 industrial plants have been completed in these countries, and nearly as many are being completed; 200,000 native skilled workers have been trained by Soviet specialists and many thousands more in the USSR. Agreements for economic co-operation operate with 45 developing countries in all.

In addition to the countries listed above, there are the iron curtain lands, virtually Russia’s colonies. Some of these like East Germany, Russia stripped after the war of everything worth having, and since then has made enormous investments and built the Berlin wall to prevent their investments (and workers) from dwindling to the West. Russia has of course exported great quantities of armaments to her satellite countries. All this is Imperialism as Lenin understood it, and nothing to do with Socialism.
Horace Jarvis
Posted by Imposs1904 at 6:12 PM