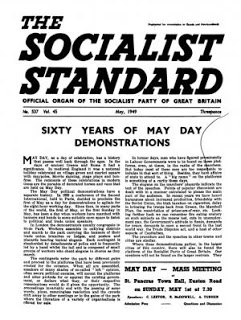 From the May 1949 issue of the Socialist Standard

Gone are the days of the old family Doctor—the benign, all-knowing wizard with his little black bag, his morning suit, and his apparent limitless fund of patience, good humour and time for his patients. Only in remote country districts or on the films can he be found nowadays, for the modern General Practitioner has to be a skilled technician in, the gentle art of patching up worn-out and ailing' proletarians, just as the garage mechanic is employed to repair worn-out and faulty motorcars and to keep them on the road as efficient machines. The analogy is all too painfully obvious.

With the development of Capitalism, and the concentration of the productive forces and means of communications (factories, mines, steelworks, railway centres, harbours, etc.) in the areas most economically suited for them, huge cities and towns have sprung up in the last hundred years, with the consequent aggregation in the industrial centres of hordes of workers, tied by invisible, economic chains to the machines. The owners of these means of production and distribution, requiring an adequately fit and efficient working-class to produce as much surplus-value as possible, have instituted through their political parties (notably the Liberal Party at the beginning of the century), various social reforms to maintain their industrial geese in running repair to ensure rapid delivery of the golden eggs of profit

The "panel” system, whereby workers could obtain free medical attention, was one such reform, the doctors being paid capitation fees (an annual sum of money for each individual on the panel) and also an allowance to meet the cost of living, the so-called Betterment Factor. The Ministry of Health more or less dictated to the G.P.s the treatment they should mete out to the workers, and naturally the accent was on cheapness. According to one circular that was sent to panel doctors by the Ministry of Health, the main constituent of the various panaceas dished out in the form of coloured water, ointments, pills, etc., for the treatment of working-class ills was bicarbonate of soda. No wonder many doctors either adopted a cynical attitude towards the problem of curing their panel patients, or else they gave up their panels, in the hope of gaining more personal satisfaction in attending to private (paying) patients, to whom they could devote more time, and where expense was not so important.

In 1945, along came the victorious Labour Government with Aneurin Bevan trumpeting forth great plans for a streamlined National Health Service. The harassed G.P. had rosy visions of beautiful, spacious Health Centres, in which doctors would be able to co-operate in treating their patients. Specialists would be in attendance, all modern equipment would be available, and a secretarial staff would deal with all the paper work. Such dreams have so far not materialised—the accent is on the building of atomic energy plants rather than on Health Centres—and although promises are, as always, being made, the General Practitioner is still operating a glorified panel system, only now he has to try and cope with many more patients than before.

Unlike the old doctor, who required private means with which to buy a practice, the modern G.P. (usually straight from College with no such financial backing) is set up in practice by the Ministry of Health, and becomes another one of the vast army of civil servants, completely at the beck and call of a powerful and exacting employer—the State. Marx's words from the ‘‘Communist Manifesto" are being borne out by the inexorable drive of Capitalism:


“The bourgeosie has stripped of its halo every occupation hitherto honoured and looked up to with reverent awe. It has converted the physician, the lawyer, the priest, the poet, the man of science into its paid wage-labourers."

Capitalism, as well as making the doctor an appendage to the industrial machine in that he must keep the human element of that machine in good running repair, has also exploded many myths that surrounded the so-called professions. One of the greatest of these fairy stories was that doctors had a divine mission in working for the alleviation of suffering, and consequently such matters as trade unionism and strike action were completely out of the question for them. However, capitalist conditions have proven otherwise, and at a special representative meeting of the British Medical Association held on the 29th and 30th of March of this year, these very questions were discussed. (Times, 30th and 31st March—from which all subsequent quotations and data are taken).

At this meeting, it was decided that a central organisation to be known at the British Medical Guild should be formed by the B.M.A.


“. . . .  to allow greater freedom of action in collective bargaining, and to provide compensation to practitioners who suffer financial hardship through participation in such action."
"This move will provide doctors with a body for collective action of a kind from which the B.M.A. is at present precluded by its memorandum of association as a limited liability company."

Dr. Guy Dain, chairman of the council of the B.M.A. moved the formation of the Guild:


“. . . for the better protection of the profession in disputes with public authorities and other bodies, and to finance collective action by the profession."

It was also moved that the Minister of Health be asked:


“. . . .  to include in the amending Bill a clause which would define registered medical practitioners as workmen for the purpose of the Trade Disputes Act"!

Such is the plight of the General Practitioner under this marvellous Health Service, that it was proposed that there should be mass resignation of G.P.s from the Service

A doctor from Manchester proposed an amendment


". . . . asking for an immediate interim increase of the capitation fee of 18s., so as to relieve 'widespread financial distress,' which he said, was very real whether it be a question of too little pay or too much work."

Among other amendments, there were demands for improvement of the Betterment Factor (cost of living addition to scale of pay) from 34 to 70 per cent., increase of capitation fee from 18s. to 35s., and reduction of the maximum number of patients of any one doctor from 4,000 to 3,000.

The doctors, like any other section of the working-class are forced, when conditions become intolerable, to take collective action to safeguard their living standards and conditions of work but we point out to doctors, as well as to their fellow-sufferers, the patients, that the cause of the overwhelming majority of their troubles is to be found in the system under which they live.

So long as Capitalism remains, so long will the doctors be overworked in the thankless task of patching up proletarians, whose chief affliction is not the ravages of some viruses, but overwork, anxiety and poverty, and so long will workers roll up in their thousands at the surgeries to be treated for the results of their well-known working-class ailments.

Away with all the quack remedies for patching up Capitalism—the coloured water, sugar-coated pills of reforms, and let the doctors, together with their fellow-workers in other trades prescribe the only scientific treatment for the ills of society—Socialism.
Michael La Touche

The author of this article was himself a Medical Doctor.