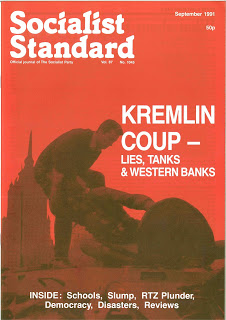 From the September 1991 issue of the Socialist Standard

Despite Chancellor Lamont's predictions, the British economy still shows no sign of recovery from the recession. Indeed, the picture is a gloomy one with world slump conditions becoming apparent as the economic downturn in Britain is mirrored in a number of other leading industrial nations. Among others, the United States, Canada, France and even Japan have all recently seen industrial production fall and unemployment rise.

In Britain, the CBI has been reporting falling confidence, orders and output. The construction industry is predicting a total loss of up to 250,000 jobs (Times, 5 August), and motor manufacturing—always a good indicator of the overall health of the economy—is in dire straits. Sales have fallen dramatically and there are widespread redundancies in the offing, with the large Ford plant at Halewood already operating a three-day week. Across much of the South the condition of the formerly booming high-tech “sunrise'' industries is more suggestive of a sunset, with thousands of redundancies and increasing numbers of factory closures. The official unemployment statistics, while grossly underestimating the real situation, are indicating that the 3 million figure will be reached before too long, possibly early next year. In the first quarter of 1991, capital investment in the UK was down by 9.8 percent (Sunday Times, 28 July) and there appears to be little sign of real improvement.


Bad though the situation is, it seems that none of the capitalist political parties think they have much by way of a solution. It now seems a very long time since the Labour Party advocated government intervention and large increases in state spending to create full employment, or since Mrs Thatcher promised the British economy a good “shake-out" after which it would be leaner, fitter and more successful for years to come. Indeed, while Keynesianism seems as dead and buried as its founder, the Monetarist doctrine which attempted to supersede it as the cure-all for the nations ills rarely now gets mentioned outside of the more eccentric university economics departments.

During the last slump in the early 1980s things couldn’t have been more different. Monetarism was in the ascendant, with the Prime Minister, Chancellor and their leading economic advisers all followers of this spurious faith, arguing that if increases in the price level could be kept to a minimum, then the market would deliver economic growth and increasing employment without too much assistance from the state.

We will expand the economy by providing a strong and measured increase in spending . . . more spending means that the economy will begin to expand: and growth will provide the new wealth for higher wages and better living standards, the right climate for industry to invest, and more resources for the public services . . . economic expansion will make it possible to end the waste of mass unemployment.

In one sense it was touching that the manifest failure of these policies when implemented in 1974-5 under Wilson and Healey did not deter Labour from promising to have another attempt. But by this time Keynesian nonsense about an increase in state spending boosting the economy and reducing unemployment (when representing in fact merely a re-arrangement of spending power within the economy between the state and private sectors) was unlikely to fool the electorate.

Though there are still some unrepentant Keynesians in the Labour Party (and some in the Tory Party, too) Labour has now moved away from such cumbersome commitments, content in its political void and happy to criticise the supposed failings of others without bothering to offer anything substantially different of its own. The Conservative Party, likewise, had already long abandoned any hope it may once have had of reducing unemployment and stimulating growth through its own efforts at manipulating the capitalist trade cycle. Now they can only hope that better days are around the corner, waiting for the turnaround in the economy like a beached whale waiting for the tide to come back in and rescue it.

No solution
The impotence of the various parties of capitalism when confronted with the system’s unpredictable trade cycle has been clearly exposed by a long scries of past failures. Faced with ever-recurring capitalist crises and slumps, they have tried protectionism and free trade, increased government spending and reduced government spending, fixed exchange rates and floating exchange rates, imperial preference and the Common Market, nationalisation and privatisation—and all to no avail. The underlying problem has remained—because it is built-in to the system.

The unplanned nature of its production means that capitalism will always periodically plunge headlong into slump. Over-investment in key industries inevitably occurs because of the never-ending drive towards capital accumulation, leading to falling rates of profit and overproduction of commodities for the market. As a result, the human miseries of redundancy and unemployment intrude into the lives of those most vulnerable to the vicissitudes of the market economy. They, of course, are the people currently paying a price Chancellor Lamont says "is well worth paying".

But it is not simply that the politicians are deliberately callous when some reformist solution to the problem is there for all to see and for them to take up. In reality there never has been a solution to capitalist slumps and, given the anarchic nature of the capitalist system, it would seem that the best Major and Lamont can presently hope for is that the recession is not exacerbated by the type of financial crash that occurred in 1929. But the recent scries of financial scandals coupled with the fall in the Nikkei Index in Japan from nearly 39,000 points to just over 23,000 in less than two years (knocking more than £1,000 billion off the value of quoted shares) suggest that things are not looking too good on that front either.

The capitalist system has always been at the mercy of such factors and only a fool could predict that “the resumption of growth should not long be delayed" (Chancellors Budget Speech, 19 March). Though the slump will end sometime—after which the cycle will come round all over again—it will surely have demonstrated once and for all the complete inability of the political parties and governments of capitalism to control their own economic system, and will have exposed the so-called “triumph of capitalism" for the hollow sham that it is.
Dave Perrin
Posted by Imposs1904 at 5:56 PM