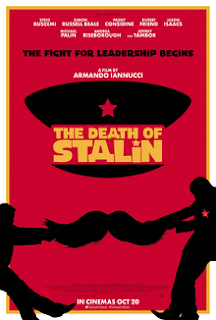 Film Review from the September 2018 issue of the Socialist Standard

Based on the French graphic novel, La Mort de Staline, this is a dark satire which grimly exposes the tortuously tedious and hypocritical nature of Stalin’s regime during ‘The Great Terror.’ Director and co-writer Armando Iannucci builds on his already strong pedigree in this genre, having made the BBC TV political sit-com series, ‘The Thick of It,’ amongst other satirical productions; most recently a successful political series, ‘The Veep’, which aired on US cable network HBO. All of which has led him to be dubbed: ‘the hard man of political satire.’

Iannucci’s treatment of Stalin and his henchman has echoes of the lampooning of Hitler by Mel Brooks in his 1983 film, ‘To Be or Not to Be’, but Iannucci is more unremittingly hard-hitting than Brooks. As a result a number of former Soviet Union countries have banned the film, including Russia, where the Culture Ministry cited the desecration of such national symbols as the Soviet hymn and the insulting portrayal of Field Marshall Zhukov, hero of the Red Army, as a bumbling idiot.

The film has an impressive cast to deliver a master class in political satire through a series of show-like set pieces and lively dialogue and superb comic timing; a particularly poignant example of which is the denunciation by Molotov (Michael Palin) of his wife in the name of party dogma. The stage is set when Stalin suffers a brain hemorrhage and collapses in his study where he remains unconscious on the floor whilst The Council of Ministers assemble, already plotting against each other.

This dark burlesque of political intrigue and back stabbing between the main contenders for power – Khrushchev (Steve Buscemi), Molotov (Michael Palin), Malenkov (Jeffrey Tambor) and Secret Police Chief Beria (Simon Russell Beale), provide the foreground; whilst the gruesome aspects of mass murder, torture and executions provide the backdrop. A delicate balancing act between comedy and horror.

As the balance of power see-saws between the protagonists, the gruesome realities of Stalin’s reign are laid bare. The strong performances of the central cast, plus characters such as Field Marshall Zhukov (Jason Isaacs) and Stalin’s alcoholic son, Vasily (Rupert Friend) and daughter Svetlana (Andrea Riseborough) - coupled with Iannucci’s attention to historical detail - makes this an impressive production.

Khrushchev, as the eventual winner in the power grab, ushers in a less bloodthirsty period in Soviet history, but still far from the hopes and dreams of the heady days of the 1917 Revolution. One glaring reason for the rapid disintegration of these communist ideals into a pernicious version of state capitalism is that you cannot have socialism in one country; a fact soon recognised by the leading Bolsheviks, including Lenin. Perhaps the more compelling lesson is the importance of scrupulously adhering to democracy in the pursuit of socialism, else to risk careering headlong into another version of ‘The Great Terror.’
Tim Hart
Posted by Imposs1904 at 9:30 AM

The Mel Brooks 1983 film was not 'The Hitler Rap'. (The actual title of the film given in the review.) The film was called 'To Be or Not to Be' - though it technically wasn't Brooks's film, as he didn't write or direct it. It was a re-make of Ernst Lubitsch's 1942 film of the same name. (Also, I think the reviewer has seriously misremembered the 1983 film, and what it was about.)

The Hitler Rap was the alternative name for a song Mel Brooks released in '83 to promote the film:


. . . and as I'm in a pedantic mood this morning, the film isn't actually about the 'Great Terror'. The 'Great Terror' refers specifically to the period of the late 30s in the Soviet Union. The plot of the film relates to the days following the death of Stalin in '53.