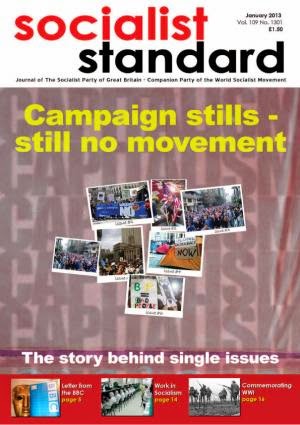 From the January 2013 issue of the Socialist Standard
We continue the series, this time looking at work.
All around the world, in the environment of capitalism, most people consider themselves ‘lucky’ to be ‘in work’; ‘lucky’ to have the means to support themselves and their families; ‘lucky’ not to be one of those discarded as surplus to requirements. More thought is given to the remuneration for work done and the security of job tenure than to any concept of stimulation, satisfaction, fulfilment or contribution to the community – let alone to the collective aims of society.

Concludes next month with a discussion of other aspects of a socialist society such as food, healthcare and education.
Janet Surman
Posted by Imposs1904 at 11:09 PM

Email ThisBlogThis!Share to TwitterShare to FacebookShare to Pinterest
Labels: Janet Surman, January 2013, Production For Use, R2013, Waste, Work in Socialism