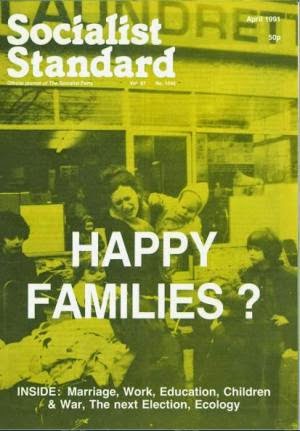 The family is under pressure. The 1990 edition of Social Trends details how over a quarter of marriages end in divorce before their fifth year, and how a quarter of all divorces involved at least one partner divorcing for a second time. In 1987 14 percent of dependent children lived in lone parent families.

Trends like these perplex the apologists for capitalism. Politicians and church leaders perceive "family values" to be, like the various other institutions of capitalism, eternally right and natural. They blame a lack of such values for a host of social ills—homelessness, drug abuse, vandalism, crime—instead of adding the broken family to their list as just another victim of capitalism's destructiveness.

Change, however, does not surprised Marxists. Once present-day society is recognised as historical, then the delusion of regarding it as natural vanishes. It was with just such a belief that Engels set out to rock accepted prejudices about the family in The Origin of the Family, Private Property and the State in 1884.

He showed that the monogamous family values of today were determined, in the final analysis, by economic developments and not by factors concerned with individual love, eternal morality and religious values. What Marx did for our understanding of the state, Engels did for the family. Early in his revolutionary career, Marx discovered that "the state is determined by civil society . . . and not civil society by the state". The political constitution is "the constitution of private property" (Critique of Hegel's Philosophy of Law). Engels showed that the present form of the family also is determined by civil society, property-owning society.

"Capitalist production", Engels wrote, "by transforming everything into commodities",


dissolved feudal relations and historical rights, replacing them with purchase and sale, 'free' contract . . . But the closing of contracts presupposes people who can freely dispose of their persons, actions and possessions, and who meet each other on equal terms. To create such a 'free' and 'equal' people was precisely one of the chief tasks of capitalist production.

Which is a continuing process, most recently demonstrated in eastern Europe and South Africa.

Free contract
Marriage, "a contract, a legal affair", feels the same economic effects. The arranged marriage gave way to "freedom of choice"—a freedom often still conflicting with the traditional values of Asian migrants to the developed West. "And on paper, in moral theory as in poetic description, nothing was more unshakably established than that every marriage not based on mutual sex love and on the really free agreement of man and wife was immoral."

Of course, Engels was not  naive enough to think that the old relative freedom of sexual intercourse disappeared with monogamy. Prostitution and adultery provide the safety valves to maintain the monogamous relation intact. "Prostitution", he wrote, "is as much a social institution as any other."

Nevertheless, it is the institution of marriage that is sanctioned by the Christian churches, with the additional civil moral sanction that love marriage is an "inalienable human right". Such hypocrisy demonstrates how morality, taken for granted by many as something quite natural, has, in reality, an economic foundation.

Even though the capitalist ideology of free choice has undermined the churches' teaching that marriage is for life, the monogamous relationship, whether marriage or cohabitation, still dominates the family group. Just over 77 per cent of people living in private households in Great Britain in 1987 lived in families headed by a married couple, a proportion which has fallen only slightly since 1961.

In many ways, it seems that the monogamous family becomes more entrenched as the dual income becomes the only way to service the family debt. Increasingly it takes two breadwinners to provide a home and an acceptable standard of living in which to raise a family. This is emphasised by the way divorcees rush back into marriage, accounting for thirty-six per cent of all marriages in 1988, adding to a shifting state of serial monogamy that is reflected in the growth of the dating agency industry.

At the same time, capitalism's growing demand for more and more women to join the workforce, made more urgent by the need to combat the demographic time-bomb, has made women less dependent on a male breadwinner. In fact, of all the petitions for divorce in 1988, over seventy-three per cent were filed by the wife. Engels predicted something like this, arguing that "the first premise for the emancipation of women is the re-introduction of the female sex into public (as opposed to private domestic) industry".

This is not to say that the freedom to choose a partner or the freedom to divorce under capitalism are wrong. Far from it, but these are limited freedoms. "Full freedom in marriage", Engels stressed, "can only become generally operative when the abolition of capitalist production and of the property relations created by it, has removed all those secondary economic considerations which exert so powerful an influence on the choice of a partner. Then no other motive remains than mutual affection."

Here, in microcosm, we have the goal of socialism in its widest sense, a society in which all our choices will be freed from "secondary economic considerations", where we have achieved, as Engels said elsewhere, an "ascent from the kingdom of necessity to the kingdom of freedom".

The original article contains the following quotation in a separate box:
"The reality is that marriage does not seek to help people to remain in love with each other. It is primarily designed to regularise their property and money affairs"
- Ruairi Quinn, Irish Labour Party's finance spokesman (Irish Independent, 23 February 1991).