The Communists and Beveridge (1943) 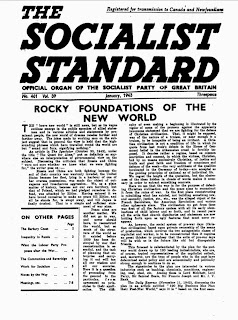 Editorial from the January 1943 issue of the Socialist Standard


The Communist Party is giving its support to the Beveridge scheme, subject to certain amendments. This has, however, not entirely pleased the readers of the Daily Worker. In their issue of December 22, 1942, J. R. Campbell confessed that the attitude of the Communist Party paper "perplexes a number of our readers, who ask us whether this system of benefits represents our ideal of a new world." Campbell answers that it does not represent the ideal, but that the report, "if it becomes law, would be a definite improvement on the existing chaotic muddle in the social services. Why not support it?"

To a reader who asks why not consider instead ways and means of ending the capitalist system, Campbell replies that "he is presenting an unreal alternative."

The gist of the argument is expressed in the following passage from Campbell's article: -

Will we get nearer to Socialism if we stand aside from the struggle around the Report and indulge in Socialist propaganda? On the contrary, we will only reduce our propaganda to impotence. Surely no reader is suggesting that we should organise a campaign to force the Coalition Government to introduce Socialism? Or that we should forget the war and go out on a campaign for the overthrow of the Government, which could only divide the British people, prolong the war, and reduce the chances of Socialism to zero.

One comment on the above is that made by the Manchester Guardian: - "There in a nutshell is the political philosophy of the Fabian, of the once-despised reformist, of every Socialist member of the Labour Party." - (Manchester Guardian, December 24, 1942.)

Also the reader to whom Campbell addressed his question about the war might have recalled that it is not so long ago that the Communist Party was quite ready to call off what it called "an Imperialist war, like the war of 1914." The Daily Worker of October 4, 1939, said :-

We are against the continuance of the war. We demand that negotiations be immediately opened for the establishment of peace in Europe.

And the Communist Party wholly approved the People's Convention demand for the overthrow of the Government and the setting up of a People's Government, which in the words of D. N. Pritt, K.C., M.P., "would know that its first duty to the people was to secure the earliest possible termination of hostilities by a peace that was neither one of conquest nor of capitulation, but a peace that safeguarded the interests of the peoples and enabled them to build a new world without war and economic crises." - ("Forward to a People's Government," published by the People's Convention Committee, D. N. Pritt, page 12.)
Posted by Imposs1904 at 6:41 PM