The nature of Russian capitalism (1986) 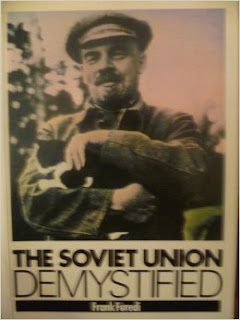 Book Review from the August 1986 issue of the Socialist Standard

This book is not as bad as its front cover - a mystifying photo of Russia's first post-Tsarist dictator Lenin stroking a cat - suggests, even if it is written by a member of the Trotskyite sect, the "Revolutionary Communist Party". The author's knowledge of Russian has allowed him access to first-hand sources about the way the Russian system works and some interesting facts are to be gleaned here and there, but all this is undermined by the mistaken conclusions he draws from these facts.

Nowadays the original trotskyist nonsense about Russia being a "degenerate workers' state" is so absurd that most modern trotskyites dare not defend it; instead they argue that Russia is some new form of society that is neither capitalist nor a "workers' state" (whatever this contradiction in terms might be) and this is the basic thesis of this book.

Furedi gives as some of the reasons why Russia cannot be described as capitalist that labour power is not a commodity. He claims: "Soviet workers do not sell their labour power - labour power is not a commodity, and there is no market in labour". But if this is the case then it is not legitimate even to talk of there existing in Russia a working class in the Marxian sense of a propertyless class forced to sell its labour power for a wage or salary in order to live. The producers in Russia would then have to be described as "state slaves" or "industrial serfs" or some other term denoting their position in the new, non-capitalist social system that supposedly existed there.

But Furedi does not go this far and continues to speak of a working class existing in Russia. This is a concession to the facts which undermines the whole of the rest of his theory. No one can deny that there exists in Russia a class of people who are excluded from ownership and control of the means of production and who, in a monetary economy, depend for their survival on the money received from the sale of their mental and physical energies. It is true that the labour (power) market in Russia is not as free as in some other countries — though even Furedi himself cites evidence that enterprises in Russia compete for labour power by offering higher wages and fringe benefits — but workers still sell the only commodity they possess, their ability to work, even if this is restricted by state intervention. It is, if you like, a state-controlled labour market, but a labour market nevertheless. That the Russian producers work for money-wages and that what they produce over and above the value of these wages is appropriated by another group within society is the basis of the Russian economic and social system and a sufficient reason for describing it as capitalist. In fact the terms "wages system" and "capitalist system" are merely alternative ways of describing the same system.

Furedi gets into similar difficulties over the nature of the ruling "group" (to employ a neutral term for the moment) in Russia. According to him, the "bureaucracy" (which corresponds more or less to the famous "nomenklatura") is neither a class nor the caste orthodox Trotskyites describe it as being, but a "political order". He bases this on his view that the bureaucracy has no economic but only  a political, oppressive role within Russian society. But this too is patently absurd: the group which stands between the working class and the means of production and which, indeed, forcibly excludes the workers from these means is said to have no economic role! As a group which monopolises the means of production to the exclusion of the rest of society, the "bureaucracy" is clearly a class in the Marxian sense and as a group which presides over, and benefits from, the accumulation of capital out of the surplus value pumped from the working class through the wages system it is a capitalist class.