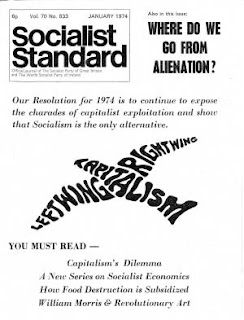 A "Housing Scandal" was reported in The Times on 6th November. A Trade Minister, a Mayor, a chief city architect and various senior officials were sacked for corrupt practices and "numerous instances of gross violations of legality".

Those involved are charged with abusing their official positions by allotting housing space through favouritism, and flagrant contravention of the laws and regulations.  . . . (The Mayor) was removed for abetting various people in the illegal possession of flats and by his general acquiescence. The chief architect was dismissed for neglecting long-range plans for the city's future development, for falling to improve the quality of construction work and the unauthorized occupancy of a flat in the same board of trade housing development.

This sounds like an extract from the Poulson proceedings, but it is not. The report comes from the Times' Moscow correspondent, and refers to Tbilisi, the capital of the Soviet Republic of Georgia. We used to hear that this sort of thing happened only in the "decadent" west' but capitalism has the same effects everywhere.


Moves in a Mysterious Way

Some time ago and American sued thirty churches for redress after an injury to him was attributed to an "Act of God". heath and Wilson may both be thinking on similar lines. Under the headline HEATH WARNING ON UNCONTROLLABLE ECONOMIC FORCES, the Prime Minister was recently reported speaking of things beyond him:

. . . we are faced by economic forces outside the nation's control which affect the livelihood of every man, woman and child in this country. (Times, 6th December 1973)

The same night, Wilson expressed the same sentiment in a party political broadcast:
But the leader of the Opposition said he would not blame everything that was happening on the Government. "For example, I've made it clear I do not think they are responsible for the present oil crisis . . . Some aspects of world prices, foodstuffs, are not their responsibility."
So these Men of Destiny, casting masterful eyes on the turbulence round them, say — what? That they are stumped.

However, it must not be thought that the current economic troubles are due to the ineptitude of fatheads like Heath and Wilson. Similar admissions are now being made by heads of state and erstwhile whizz-kids all over the world. On 2nd December the Sunday Times Business News had JAPAN: BRAKES ON THE BULLET ECONOMY. The Tokyo correspondent wrote:

The oil crisis, commodity shortages, a Cabinet re-shuffle including a change of Finance Minister, not to mention he usual uncertainties of economic forecasting, all these have thrown Japan's exports into a state of nearly total confusion.
The Economic Planning Agency admits: "It is impossible to give a responsible answer." A more assured member of the Ministry of International Trade and Industry says: "Nobody really knows, but . . ."

There was a symmetry between this and the item below it, headed THE US: NO ONE REALLY KNOWS. It spoke of forecasts of "unemployment nearly doubling to 7.5 per cent. or 8 per cent", and went on:

Most professional economists now admit that they have only the vaguest notions of what will happen in the next 12 months . . . no one knows how US export trade—considered to be one of the strong factors of the American economy—will be affected by economic slowdowns in Europe and Japan.

All now agree unanimously — but, being "experts" only temporarily — with the Socialist Party's case that capitalism cannot be controlled.


Alone I Did It

An example of the absurdity and anarchy of capitalism is shown in a report from Brazil. Like every other country, Brazil has sought "growth". As elsewhere, this is supposed to promise higher living standards for the workers — but, of course, not in the foreseeable future. Antonio Delfim Netto, "the Erhardt of Brazil's economic miracle" is quoted six months ago explaining what would happen of wages rose: "Easy, there would be runaway inflation."

But labour shortages have enabled Brazilian workers to demand, and get, higher wages. And this has enabled the pragmatic Delfim (a) to admit that growth has nothing for the working class, and (b) to pretend he arranged for a labour shortage instead.

Last week Professor Delfim admitted that Brazil's chosen vehicle of expansion (the market economy) did not provide any mechanism for reducing the level of inequality, but professed himself happy with the effect which the emerging shortages of labour have produced. "This," he said, "is what we have worked for all the time." (Guardian, 4th December 1973)

Obviously this "miracle-worker' hasn't a clue, except to making up ingenuous answers. What will he say when labour shortage gives way to redundancies?

We have from America a leaflet headed WHAT YOUNG PEOPLE SHOULD KNOW ABOUT COMMUNISM, apparently issued by the FBI. It urges every citizen to look out for "espionage, sabotage, and subversion activities". What it refers to, of course, is state capitalism: the first thing people should know about Communism is that it does not exist in the places implied, Russia, Cuba, China, etc.

But even taking the leaflet at its face value, it contains a curious self-contradiction. One side says, quoting J. Edgar Hoover:

Why is Communism a threat to you? Communists want to control everything: where you live, where you work, what you are paid, what streetcars you ride (or whether you walk), how your children are educated, what you may not and must read and write . . .

We are often told that the language of Socialist economics is too weighty for the man in the street who reads football reports. The report of Queens Park Rangers v. Sheffield United in The Observer on 9th December began:

The leather spheroid never looked like evading the custodian.

It means nobody could get the ball past the goalkeeper.
Robert Barltrop
Posted by Imposs1904 at 11:17 PM