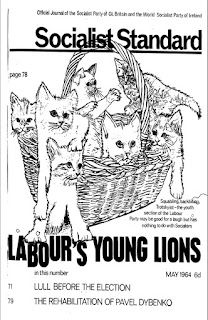 From the May 1964 issue of the Socialist Standard

The recent conference of the youth section of the Labour Party, the so-called Young Socialists, at Brighton, has again rejected the official party policy on many important issues. There are signs that the young Socialists have now become an embarrassment to the Labour Party as was the League of Youth in the past. The Labour Party has always been unfortunate with its youth section. They have always been captured by extremists. In the thirties it was the Communists; today it is the Trotskyists.

Trotskyist theory places great emphasis on leadership and slogans. It is their policy to take up the demands of any discontented group and to try and lead their struggle. The Young Socialists have been an easy target for them. In fact it is only here that their policy of boring from within has had any success. The youth sections of all "left-wing" parties tend to be more "radical" than the main party.

When the blatant vote-catching manoeuvres of the leadership of the Labour Party are considered it is not really surprising that the Young Socialists have gone the way they have. They don't like what they see but have not the political experience to explain it. It is young people in this frame of mind that the Trotskyist approach with criticism and an alternative policy. They move in and organise the discontented members.

There are at present four or five Trotskyist and similar groups operating in the Young Socialist movement. This in itself is noteworthy. For Young Socialist branches have tended to back the group which approached them first, though changes occur through the process of splitting to which the Trotskyist groupings are particularly liable. The most influential of these is Keep Left which the Labour Party has already proscribed. This takes the same line as the Socialist Labour League, the main British Trotskyist group, and has a clandestine organisation within the Young Socialists. There are other Trotskyist groups opposed to Keep Left in Liverpool, Nottingham, Glasgow and South Wales. Then there is Young Guard, which has a following in London and amongst students. Strictly speaking, this is not Trotskyist—its Trotskyist wing recently broke away—but it has the same technique of "boring from within."

An amusing aspect of all this is the factionalism and the disagreements between the various groups. The leaders of the boring-from-within groups—Healy, Grant, and others—are all older men who have been on the Trotskyist movement for twenty to thirty years. They fell out with each other soon after the Revolutionary Communist Party was dissolved in the late 1940s. The basic differences were over the nature of the Russian system and various theses of Pablo, a leader of the Fourth International, on Eastern Europe. These quarrels have been transferred lock, stock and barrel to the Young Socialist organisation. Wherever their branches meet these obscure differences are aired and the whole Trotskyist library of abuse is brought out—centrist, revisionist, Pabloite, elitist, Stalinist, Krondstadt, etc., etc. Added to this are stories and rumours of how the members of the groups have behaved at various conferences; how they allied themselves with the Right Wing; how particular groups have organised too many socials and dances. All this together with secret meetings and visions of armed uprisings may be good for laughs but has nothing to do with Socialism.

Generally speaking the members of these factions spend more time arguing against each other and Party officials than anything else. Such is the experience of boring from within. If Socialists were to join the Labour Party they too would be forced into petty disputes to the detriment of Socialist propaganda even if this were allowed. The Young Socialist Movement may have been easy to infiltrate but it has no power to do anything. When its members face the working class they do so as members of the Labour Party and on its programme. They do not control their own journal. They cannot campaign on their own programme. They have to campaign for a Western nuclear deterrent and for immigration control and for other policies which their conference has rejected. To campaign on any other programme is to render themselves liable to expulsion. This is the whole futility of boring from within. Inside the supposedly mass party your time is taken up with quarrels with bureaucrats; outside you campaign on their programme.

The Socialist Party of Great Britain holds that Socialism can only be established by a Socialist working class. hence the chief task of Socialists can only be to make their fellow workers Socialist. We hold that this can best be done by campaigning for Socialism and Socialism alone. To do otherwise is to get the support of non-Socialists and eventually to cease to be a Socialist party altogether. We accept the doctrine of the class struggle and base our policy on it. Thus we refuse to compromise with other political parties which, including the Labour Party, can only stand for Capitalism.

It is sometimes argued that the way to make Socialists is to back the demands of politically ignorant workers and show then that these demands can't be realised without getting rid of Capitalism. But this is an odd way of going about things. Why not tell the workers straight off that they're going down a blind alley? Why bother to lead them down it just to show them it is a blind alley? The logic of this is that the working class should try out all wrong policies just to see that they are wrong. We reject such nonsensical doctrine. But once this doctrine is rejected then the case for entryism falls to the ground. There is no longer any need to make a principle of leading workers down blind alleys because you think it will benefit them.

Basically, however, the Trotskyists don't accept the need for Socialist understanding. They are more interested in leading ignorant masses. This is perhaps why have been successful among the Young Socialists. The ordinary Young Socialist member has little knowledge of politics. He is merely discontented. The Trotskyists have channelled and assumed the leadership of this discontent. Thus arguments which we have heard many times before appear in Marxist and Trotskyist terms. But behind the words there is no understanding. The ordinary Trotskyist follower does not understand the principles of Socialism—some are even religious—he does not realise he is being used by a bunch of experienced political manipulators who have failed to gain a following elsewhere.

Some good may yet come from this confusion and ignorance. Some young people may be led to study the principles of Socialism and to think beyond the slogan level. Already ideas on Russia, nationalization and leadership which we have been expressing for decades are being discussed in some sections of the Young Socialists. We have something to contribute to these discussions. After all, we pioneered the view that Russia is State capitalist; we said even before nationalization was implemented that it would not benefit the working class; it has been a principle of our organization from its foundation in 1904 that the working class doesn't ned any leaders and must emancipate itself. It is not boasting, but a historical fact, that we have been consistently correct in our attitude to political issues. Those who are interested in politics do themselves a disservice if they ignore our case.