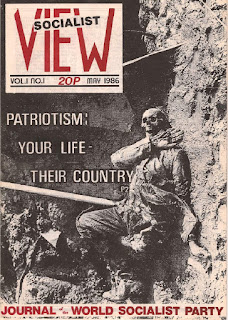 From the May 1986 issue of Socialist View

Since the last World War - the second World war to end all wars - finished in 1945 there has not been a SINGLE DAY passed on which a war was not taking place somewhere in the world. Large wars . . . small wars . . . together they have accounted for the deaths of some THIRTY MILLlON human beings - about three-fifths of the total slaughtered in World War Two - and the maiming of probably four times that number of people,

As time passes and particular wars roll back into history, as the hate propaganda recedes and the politicians and generals write their memoirs, the truth about the REAL causes of these obscenities frequently emerges, Always, behind the death and suffering, the heroism and cruelty, are the economic interests of the ruling class - a ruling class that collectively owns and controls more than nine-tenths of the world's wealth; a class of international thieves whose members can, and frequently do, change their national identity with greater ease than could most workers change their shoes.

When countries are arming or mustering their wage slaves to fight, we are told that the conflict is about our interests, that it is concerned with our 'freedom' and our 'way-of-life'. The capitalist class and their pensioned politicians always become very preoccupied with 'our interests' when they want us to slaughter other workers on the alleged pretext that those other workers are our "enemies". Yet, when our crumbs of what passes for freedom in capitalist society are denied us, or threatened by poverty or unemployment, when we and our families are condemned to live in slums or have our health threatened by pollution or lack of medical care, when our children are given work-orientated training instead of education and our old folk have to choose between food and heat, what care our national capitalists for our plight - our denial of the most basic human rights, our misery or our gross degradation?

Think about it: did you ever hear 'a nation' marshalling its forces, proclaiming an emergency and amassing its reserves of wealth because the majority of its citizens, its working class - the only productive section of society in any country - are facing dire social problems? On the other hand, can you seriously believe that ‘the enemy' (whoever that may from time to time be) wants to make war in order to get possession of the things that ordinary working people possess or enjoy?

If a country is bent on conquest for gain, then, patently, the ruling class in that country will have nothing to gain from the conquest of the working people who own little beyond their ability to work. Equally obvious is the fact that the ruling class in the ‘enemy' country can have no designs on OUR way-of-life - our poverty, our poverty-ensuring jobs, our dole giros, our slums and our mortgages! The notion is too silly for words - as silly, indeed, as the notion that our ruling class want to wage war to win for themselves the social miseries of the working class in the 'enemy' country.

There is a mass of factual evidence to show beyond reasonable doubt that wars are caused by the conflicting world interests of the ruling class but, even without such evidence, it is abundantly clear that workers in ALL countries posses nothing of sufficient value to create thoughts of conquest and gain. WORKERS TRULY HAVE NO COUNTRY - indeed, most of us have to pay a rent of some sort even to occupy a ‘working class' dwelling. It is our masters, the capitalist class, who own the country we live in; it is in their interests, directly or indirectly that politicians pass laws and it is in their interests that judges and police enforce those laws. It is their interests - their markets, their trade routes, their areas of material and strategic interest - that represents the gain or loss in war. All we called on to do is to fight their bloody wars.

Most working people have seen and heard enough to make them cynical about the motives behind some, at least, of past wars. Unfortunately, when a new conflict of interests arises between sections of the ruling class and the politicians, the media and the other institutional prostitutes of capitalism get to work with a barrage of hate propaganda compounded of lies and fictions, it is all too easy for many of us to forget the last time. We are brought up on an ideological diet of nationalism and political ignorance; taught to mumble prayers for 'our leaders', and 'our country'; told that 'unlawful' killing is murder and excellence in battlefield slaughter is 'good' and 'heroic'. Given such conditioning it is a simple matter for the hate mongers - the political godfathers of capitalism - to convince the working class that they somehow share in the ownership of 'their country' and that they should become involved in organised murder to protect their 'national interests'.

Translating our experience of war and conflict into the present situation in Northern Ireland makes the phoney ideological rubbish being peddled TO THE WORKING CLASS by both the republicans and loyalists become evident for what it is. Why are working people killing and threatening other working people in Northern Ireland today? Do the poor of the nationalist ghettoes want to take something from the poor of the loyalist ghettoes - or vice versa? What have we to take from one another? Poverty? Slums? Unemployment?

‘Ah!' says the politician, the churchman, the republican or loyalist purveyor of ideological bullshit, 'There's more to life than poverty, slums, unemployment and the acknowledged miseries of ordinary working people. There's our British heritage, or our Irish heritage; there's our culture and our separate identities.'

Does this British or Irish 'heritage' do anything to help us to overcome our COMMON WORKING CLASS HERITAGE OF POVERTY, INSECURITY AND SOCIAL DEGRADATION - THE REAL, ACTUAL, FACTUAL AND PAINFUL HERITAGE THAT WORKERS SHARE IN EVERY COUNTRY OF THE WORLD? Our 'separate identities'! Some political nutcase might tell you that this is illustrated in the fact that some of us can articulate our working class miseries, or the common ‘cultural' experiences built on those miseries, in a different language BUT LANGUAGE BEARS NO RELEVANCE TO THE COMMON FACTS OF OUR WORKING CLASS CONDITION.

Our real problems are not caused by the ideas and superstitions that we absorb from parents, teachers or churches nor are they the result of the conflict and violence that arises from the exploitation of our conditioned ignorance by self-interested politicians and their capitalist paymasters, Our ignorance may result from our class position and may be fanned into hatred by those whose profits depend on our remaining ignorant, superstitious and divided. But the single cause of our problems IS CAPITALISM; it is capitalism that enforces on us the role of a propertyless, subject class. That enforcement can NOT be done by police forces, soldiers or repressive laws; It IS ACHIEVED BY THE CONTROL OF OUR IDEAS; by promoting among us, the working class who own nothing but our ability to work, the belief that we share ownership in a country or 'nation'; that patriotism somehow serves our interest or that religious superstition will earn us a good life in an afterworld if we dumbly submit to the miseries of the present life.

Those who promote hatred and division among us, those who preach nationalism or patriotism, who urge us to invest our blood in the cause of Britain, Ulster or Ireland, are playing the game according to the rules of capitalism.

WORKERS HAVE NO COUNTRY! When we have learnt to understand that we have made a giant stride forward from the obscenity of capitalism. The countries we live in, together with the machinery of production and distribution by which we live, are the property of the ruling class; theirs is the Ulster, the Ireland and the Britain that our loyalists and republicans want us to support and, if necessary, to be prepared to suffer or die for. Understanding that class ownership is the motive power behind all forms of patriotism and nationalism validates the time-honoured clarion; WORKERS OF THE WORLD UNITE FOR SOCIALISM!