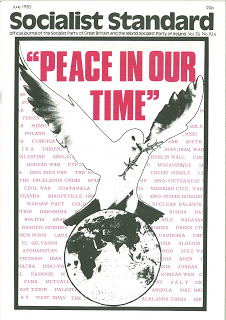 We had better brace ourselves. For, no sooner has one tidal wave of media effluent—the inevitable consequences of the recent royal junketings—broken over our battered heads than another gathers pace and roars menacingly towards us. And the occasion of this impending deluge? No; not, as we might reasonably have supposed, the bloody fiasco taking place in the South Atlantic. And most certainly it is not the mounting misery and insult visited upon the unemployed, the homeless, and the dispossessed. It is, as you will have guessed, the threatened arrival of yet another parasite to swell the ranks of those many others that infest the corporate body of the working class.

Our royal masters are spawning—an activity which, arguably, is the nearest they’ll ever get to hard work in their pampered lifetimes. And even though the carefully orchestrated and sycophantic public celebration of the event may stick in our throats, the media intends to make certain that we are unable to escape their overblown attentions without a struggle. They will thrust their unctuous products at us from all quarters and by every conceivable means short of tying us to our beds and ramming them down our constricting throats with a broom handle. No matter if, as some of us must, we retch and heave on their repulsive diet: the cringing lackeys of press and broadcasting will have done their duty by queen, country and their capitalist masters. And all this on behalf of a grossly over-privileged individual who, although it will probably get no nearer its mother's milk than its royal grandmother does a pint of keg fizz and a bacon sandwich, will nevertheless in due course suck the rest of us dry.

Meanwhile we have no need to look a million miles from the royal nursery in order to remind ourselves that many thousands of other unsuspecting young lives are about to begin. It is almost rhetorical to ask ourselves what life—if it is permitted to continue—holds in store for them. One thing is eminently predictable: if we exclude the ten per cent of the capitalist class, who will have no need to work, then at best they will find themselves in the market place trying to sell their labour and brain power to the highest bidder. (At worst—and this hardly needs to be spelt out—for millions more of them life will be nasty, brutish and short.) And should these same workers have the misfortune to fall prey to, say, serious chronic illness, they will find themselves reduced to social security handouts and all the degradation that this entails.

[The Princess] of Wales—no less—finds herself, for a short hour or so, obliged to join the labouring classes? Well, to begin with, there has to be an avalanche of gaudy rubbish remarkable only for the fact that some workers seem ready actually to spend their money on it. The junk on offer will range over coffee-table glossies and inscribed glassware to the screen-printed tea-towels, decorated chamberpots, mugs, plates and so on with which the sharks who sell them patronize the poor. In short, it will add up to just another vulgar rip-off which should net its unprincipled perpetrators, most of whom wouldn’t be seen dead with their own products, a huge fortune. (As if they weren’t making enough out of the Pope’s visit.)

Then there’ll be those banner headlines: "IT'S A BOY!”, perhaps, or “THAT SLY SMILE: BUT IT’S
DADDY'S EARS”: or “OOPS-A-DAISY” accompanied by a telephoto’d picture of Pater anointing his offspring with vintage port. Of course, we could be in for a surprise: ‘THE DAY GREAT GRANDMAMMA GAVE IT THE WRONG BOTTLE’’ across four columns of The Times.

However the truth is that were the royal infant to parade, on its backside, a birth mark in the form of the Holy Grail it would make not a ha'p’orth of difference to the situation as it affects the working class. A tick is a tick and, battened onto the back of a sheep, it must inflate itself with the blood of its host. And herein lies the heart of the matter. The ruling class, in all its guises, is at the same time a dependent class. Without the broad acquiescence-benevolent or grudging—of the working class it could not survive. In order that workers may the more effectively be exploited the masters must be able to rely on the collaboration, at the point of production and elsewhere, of those same workers. One way by which they secure this collaboration is through the assiduous promotion of the mystique of royalty, or the presidency, or some other military overlordship, or whatever. Other symbols of class rule include the church, with its crass mumbo-jumbo, the military, with its bombast, the Palace of Westminster, with its traditional idiocies, and the law, with all its vicious hocus-pocus. And it should never be forgotten that our masters have had plenty of practice in their art, with the accumulated experience of hundreds of years of capitalism to call upon.

Another Machiavellian ruse in the armoury of the ruling class is to divide us against each other. With the utmost skill and perseverance, and with the enthusiastic cooperation of the media, our masters have succeeded in persuading us that we are, each and every one of us, through our “natures”, motivated solely by self-interest; that class is a myth; that our rulers are where they are through their own effort and initiative; and that the wealthy deserve “their” wealth. Indeed — or so they keep telling us — where would the rest of us be without their power to invest? (They also happen to believe that they were born to rule, although they would not nowadays advance this theory in public.)

As a class the workers have accepted this fatalistic view of society without serious question. Indeed, were this not the case the existing system of worldwide capitalism could not survive. For fundamentally to question the existing order is effectively to expose it and challenge it. A reasoned understanding, on the part of the working class, of the system which alone must take responsibility for ninety-nine per cent of human misery would effectively see off that handful of grasping thieves who, for so long, have held us in thrall. Such an outcome would necessarily place in their proper perspective those princes, prelates, military bully-boys and the like who have been permitted to be adorned, adored, and elevated to such ridiculous heights. Only through a common understanding shall the workers find the strength to sack the class who rule over them. Capitalism’s cover, blown many years ago by Karl Marx, would at last be blown by the working class itself—the same class that that courageous thinker and revolutionary fought so hard to enlighten in his own times