An Open Letter to the Electors of East Ham North (1938) 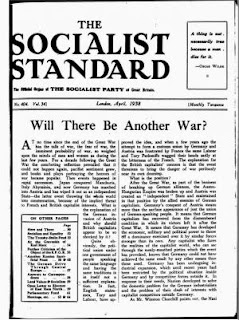 From the April 1938 issue of the Socialist Standard

Low Wages—High Prices—Unemployment
to mention only a few, are still the burning questions of the day. We say “still,” because they were the burning questions half a century ago. Political parties then promised immediate remedies if returned to office. Half a century of failure will not prevent them from again announcing immediate remedies to cure these evils—next time.

Political parties have their pet schemes which they claim will solve your problems. The Liberals say "Free Trade," the Tories “Protection" and the Labour Party point to ”Nationalisation” as the way out. You have tried the first two, and are now being persuaded to try the third. But even if you do, we say it will leave you in exactly the same position of insecurity and poverty.

Why Is This?
It is because these “remedies” do not touch the root cause of your troubles. It is the cause that must be understood first. The remedy must follow. This you will agree, is sound commonsense. Let us apply it, then.

At present, your only means of getting a living is your job. But, strictly speaking, “your" job is not yours: it belongs to those who give you your wage-packet, the employing or capitalist class, and they can take it away when it suits them. They are in a position to do this because they not only have the means to pay wages, but they also own the places where the job is carried on, and all the necessary things for it, the machinery, raw materials, etc. The only thing in all this which does belong to the workers is the energies they sell in return for wages, and the amount in the packet is the market price of those energies—about enough, on an average, to keep the worker in working condition. But the wealth the workers produce is more than they take home. What is left behind belongs to the capitalist. This, after paying all other expenses, is his profit. This profit is the sole reason for turning out goods, and how much of this profit the state of the market will allow will decide how much wealth is to be produced, will decide whether you work overtime, short time, or no time at all, and whether, at different periods, your wage packet is a little bigger, a little smaller, or there is no wage packet.

This, then, is why the workers are poor— because the greater portion of what they produce is transferred to the pockets of those who own the means of living. It is the ownership alone that gives this privilege to a small minority of people. That is why for them there are country houses, yachts, costly food and expensive clothes, and for you—jerry-built houses, shoddy clothing and cheap food. What is more, you live all the time in uncertainty, insecurity and strain. This condition for the workers is a perpetual one, because the capitalist is always seeking means to increase his profit. He can only do this by increasing the output of the workers, and labour-saving machinery, cut rates, speed-up, are the results. Relatively fewer workers are required to produce existing requirements. The workers who are no longer required are forced to look for another job, and their competition for jobs is a constant threat to the wages and conditions of those in work. From time to time, as a result of this frenzied rush for profit, a crisis occurs, and there follows more unemployment, less wages, and greater insecurity than ever.

You can see that under the present scheme the capitalists and the workers obtain their living in totally different ways: one by property, the other by working; one by buying labour-power, the other by selling it, if he can. This opposition of interests between worker and capitalist is inseparable from capitalism, and for that reason all the efforts of other political parties to solve the evils arising from these conditions are rendered futile.

Have We a Remedy?
Our answer is that we have the only remedy to cure these bread and butter problems of yours, and ours. Perhaps you don’t believe it? You may well be doubtful. For over fifty years politicians have come, promised, and gone their ways, leaving only high prices, low wages, unemployment, and the shadow of war. May ours not be just another story of claiming to succeed where the other fellow has failed? you may ask. We hope you do. Because it is the purpose of this letter to show just how the Socialist Party of Great Britain differs from all other political parties. Our proposals do not consist of pet schemes, immediate remedies, or fancy slogans dealing only with effects and leaving causes untouched. What we say is this: You cannot plan prosperity under a system in which the privilege of the few rests upon the poverty and exploitation of the many. And because all other parties accept this system as the basis of their schemes they fail, and must fail.

The Plan of the Socialist Party of Great Britain has as its first step the removal of these conditions, and replacing them by conditions which will make it possible for the problems of the workers to be completely solved. The capitalist system (the private ownership of the means of living) must go, we say. Its place must be taken by a system of common ownership, based on production for use only. This remedy is the only one worth while for the workers. Nothing, we say, can be accomplished until this is done.

Let us test it. Take unemployment. Why can’t the whole of the unemployed be re-absorbed into industry? With the ample means at our disposal they could be set to work producing not only for themselves but for others. Thus everybody would benefit because more wealth would be produced. But, as we have seen, the taking away of jobs, as well as the giving of them, is essential for a profit-making system. That is why political parties who accept and work within the present order can only suggest doles, and pious hopes for better times. Only in a system of production for use will unemployment be banished, because the good of all being the common end, it will be to the advantage of all to have all taking part in producing goods and services. The fear of losing your job, the constant dread of millions, cannot arise under Socialism. Your job will at last be your job, because it will be a part of the community ownership in which you have equal voice. The drudgery and monotony of present-day work, carried out under orders, will be replaced by responsibility and interest, because you will then have a voice in what is produced and the conditions in which it will take place. The workers' standard of living under Socialism will not be based on the thing necessary for mere working efficiency, because there will be no surplus going to an idle and useless section. Workers will enjoy what the resources of society are capable of supplying.

The programmes of other political parties are unable to guarantee you this, because all other political parties are concerned with the interests of the profit-makers or owners. They have not altered, and cannot alter, the amazing contrast between riches and poverty. The only things they have to offer are tide-overs for your poverty in the shape of doles, pensions, free medical services, etc.

In contrast to the futile reforms of other political parties, Socialism is the Remedy for which the S.P.G.B. seeks the support and understanding of the working class, and offers itself as a means by which the workers, through the ballot box, can obtain political power for this purpose. Since 1904, when this Party was founded, Socialism has been our sole aim, and for that reason we are opposed to all other political parties.

Now you have read this letter we ask you to think over our proposals. Compare what other parties say about your conditions with what we say about them. Ask yourself: Does our examination of existing things square with your everyday experiences? Is our plan one that meets your real needs? If, after reflection, you are inclined to I agree, learn more about THE SOCIALIST PARTY OF GREAT BRITAIN.
E. Wilmott.