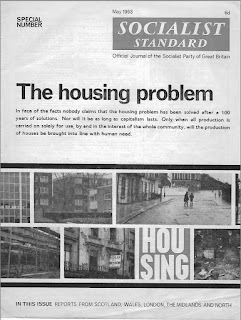 From the May 1963 issue of the Socialist Standard

Glasgow
Most of the working-class dwellings in Scotland are the product of the rash of building that took place at the beginning of the century. In Glasgow it is the tenement building with its single and two-roomed apartments, usually three-storied, that predominates.

They were built for the influx of workers from Ireland and other parts of Scotland who crowded into Glasgow during the halcyon days of British capitalism when shipbuilding and heavy engineering along the west coast were booming. Such towns as Port Glasgow, Greenock, Paisley, and all the environs of Glasgow were built on the same lines.

In Lanarkshire, at such places as Motherwell and Hamilton, the coalfields attracted workers not only from Scotland and Ireland, but also from such European countries as Poland and the Ukraine. There the houses were built mainly on the classical “miner's row” pattern, rows and rows of depressing squat little buildings, each one a replica of the other. They may have been a different model from the Glasgow tenement, but, in common with them, they were small, overcrowded, cheap, and utterly unsuitable for human habitation.

On the East coast the story was equally miserable. The housing of the working class in Dundee, Kirkcaldy, Leith, and Edinburgh is from the same sorry mould as Glasgow. Indeed, Edinburgh, which has some pretence of being a cultured city (the ‘‘Athens of the North” the locals boast) with its festival of arts and drama and its litter boxes with the legend “This city is beautiful, keep it that way,” has probably some of the most sordid slums in Europe.

Today, of course, there are changes taking place. A walk through Glasgow's back streets will show that gaps are beginning to appear in the previously unending sides of those asphalt valleys. The local authorities are being forced to demolish some of the worst properties, though sometimes they are saved the task by their helpmates, decay and ill repair. Sometimes the buildings collapse when they are empty, sometimes when still occupied. In Possilpark, in the north of Glasgow, a whole gable-end of a tenement collapsed in a high wind last January. In Anderston and Gorbals in recent years tenements crumbled away in the night while still occupied. In Balloch, Dumbartonshire, last April, an eleven year old boy was crushed to death when a condemned tenement collapsed on him and his playmates.

Of course, houses are not only falling down, some are being built. But how many? Despite the promises of local governments, the picture is far from rosy; in Glasgow last year there were only 2,000 built, the lowest since 1947. More significant than the paltry number that are going up, is the type of houses that are being built.

In those areas where the houses were of a decent standard, the authorities found that the rents were too high for the majority of workers. Indeed, Mr. D. Gibson, the convenor of the Housing Committee in Glasgow, confessed that they could not send workers from the condemned tenements to such areas as Mosspark because ‘‘They were high- minded men who put Mosspark out of the reach of the very men and women who are demanding higher standards, and people in this city in need of housing cannot face up to rents and rates of £130 per year.” (Glasgow Herald, 19/3/62.)

The same sad story of workers too poor to be able to afford anything approaching decent housing. But for an example of ‘‘progress” the next point could hardly be bettered.

“Many years ago Glasgow had taken a resolution never to build again the two-apartment houses which had been such a large part of Scotland's housing problems. Now they were faced with thousands of Glasgow's citizens, the salt of the earth, who wanted to stay in Anderston and Woodside—the places where they had been brought up—in room-and-kitchen houses with an inside toilet. They refused to go to the new housing estates of Castlemilk and Easterhouse, and Glasgow Corporation were now building 10,684 modern houses for two persons. . . . That's progress; that's the criterion of affluence in this affluent society, a room and kitchen with an inside toilet.”

But even this modest demand for a new two-room apartment is hardly likely to be met. Mr. Gibson considers it will be necessary to convert the old property in some cases—“Even if they built 100,000 new houses in the next twenty years, they still need to keep standing some 30,000 room-and-kitchen and two-room-and kitchen houses, but they must be improved. They must have an inside toilet and reasonable washing facilities, even if it was a hot shower instead of a bath. These improvements could be carried out inside the bed recess in the kitchen at an estimated cost of £750 per house which would make them habitable for another 20 years.”

What a dilemma! They are building 2,000 a year just now: even if they built 100,000 in 20 years they would still have to convert old property and this would only last another 20 years.

Twist and turn as they may, capitalisms’ reformers, whether the Labour Party brand like Mr. Gibson, or Tory, Liberal or Communist, are bereft of an answer. Like the system they support, they find in the housing situation that every time they patch up in one place, something falls down in another.
Richard Donnelly
Posted by Imposs1904 at 9:42 PM

An old classic from an old comrade. I remember he used to be up on the soapbox at Kent Street doon "The Barras" and would say, "they don't have to pull the building down they'll fall down", with a sweep of his hand in a left direction, to add emphasis to his oratory, in the direction of a decrepit eyesore and one day it wasn't there, having just vanished. Did it fall or was it pushed ? Well,..

I also remember him telling some Labour Party canvassers "if a building is ruined, you don't try and fix it with rickety scaffolding, you knock it down and replace it" He had a similar line with Jehovas Witnesses - you can't fix what is broken, you need to change it for something better