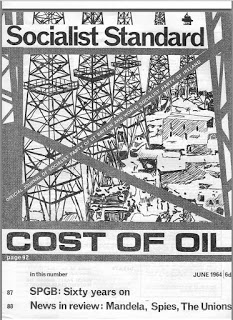 Party News from the June 1964 issue of the Socialist Standard

A group of individuals standing in Trafalgar Square were shocked—shocked at what they obviously regarded as an act of profanity, a desecration, a catastrophe, taking place before their very eyes.

We assumed that these gentlemen came from some military establishment, as they were all wearing bowler hats and dark lounge suits and were carrying rolled up umbrellas. Had they been wearing bearskins we might have said they were Guards officers. But then of course, as everybody knows, rolled up umbrellas don't go with bearskins; the best thing to match a bearskin is a bear. But we must not lose the thread of our story.

We should point out that at first we experienced some difficulty in understanding what they were saying. At one point we were of the opinion that they were using some primitive dialect interlaced with Esperanto. But we were wrong; one of our brighter members remarked that it was extremely difficult to speak English without opening the mouth and at the same time keeping it full of marbles. But with practice it can be done, as these gentlemen were now demonstrating.

Our first clue came very quickly when, during one of their rare periods of articulation, one uttered a “four letter word". This, mark you, on the Sabbath Day.

Now a four letter word in English is the most fundamental expression of annoyance one is capable of. These military gentlemen were indeed very annoyed.

The seat of the trouble lay below Nelson’s column. For the benefit of overseas readers, Nelson's column is the most famous monument in the British Empire, or Commonwealth as they prefer to call it nowadays. It is a veritable pillar of British capitalism, a symbol of Imperialism ; and what’s more, it was built with scab labour. Apart from keeping Nelson up, it is very useful to the large pigeon population whose visiting cards are clearly visible in great numbers. On this occasion, however, this May Day Sunday in nineteen hundred and sixty four, the monument was performing the most useful role in all its history.

Draped round the column was a large red banner with the name of the Socialist Party on it. A little below this a large printed slogan—a very sensible slogan— “Abolition of the wages system”. The famous lions had posters over their front paws, and one had the Socialist statement on war attached to his posterior. On the plinth itself was a table at which sat four Socialist speakers, each waiting to speak to the audience of well over a thousand people. A hundred or so members of the SPGB were there, each playing his part in making this a great occasion. The whole scene was enough to make Lord Nelson turn in Lady Hamilton’s bed.

Yes, this was the Socialist Party holding its first May Day Rally in Trafalgar Square. Hitherto, on previous May Days, we have been plagued with the Communist circus and the Co-op adverts in Hyde Park advising workers to eat Stork margarine. (After sixty years of the "progressive” Labour Party, surely it ought to be butter?) But here we were without any distractions; no bagpipes, brass bands or skiffle groups.

We took full advantage of the situation —God was on our side as far as the weather was concerned—it was a lovely afternoon. For three hours all within the Square heard the Socialist case through our loudspeakers. To see lots of Party members selling the Socialist Standard, and a well-stocked literature stall carrying every Party publication, was a grand sight. Nearly £12 of literature, including 300 copies of the Socialist Standard were sold, and a collection of £19 10s. 0d. was taken up.

The meeting was temporarily interrupted by the appearance of two rather motley processions in the roadway outside. Composed of Labour and Communist supporters, they depressed the intellect with the forlorn and futile slogan they so dearly love—"Hands off Cuba”— "Hands on Makarios"—"Hands oil Fanny Hill”.

After this dreary and cheerless assembly had wound its pathetic way up the Mall we continued to enjoy the optimism of the Socialist message. Comrades from Birmingham, Glasgow, Brighton, London, combined to make the day. Many members brought their families—and why not? Stimulating speeches, comradely faces, sympathetic listeners—who would not be a Socialist on this pleasant afternoon in the month of May?
P. C.

If I were to guess, I'd say that the author of this light hearted report - 'P. C.' - is in fact P. R. Collins (also known as Peter Rollings.)