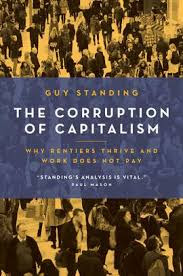 Book Review from the December 2017 issue of the Socialist Standard

'The Corruption of Capitalism: Why Renters Thrive and Work Does Not Pay'. By Guy Standing. (Biteback £9.99)

There is a lot of useful information here, on the ways in which present-day capitalism does not run on the basis of a ‘free market’. For one thing, there are massive subsidies to companies, such as the £21m recently given by the government to Toyota to help it modernise one of its UK car plants. The World Bank loaned $900m to Lidl to help it expand in Eastern Europe. Farming subsidies in both the UK and US go overwhelmingly to a small number of very rich farmers, and the fossil fuel industry has received enormous subsidies to enable it to keep down prices to consumers.

The tremendous rise in the number of patents issued has led to ‘intellectual property’ becoming a prime source of income for a powerful few, just like copyright rules. Debt, including for housing or student loans, has become big business and, again, a major source of income. The enclosure of the ‘commons’ has proceeded apace: this covers everything from shrinking numbers of allotments and public parks to the closing of libraries and museums.

Standing sees all this as not just part and parcel of capitalism but as indicative of the rise of a new variety, rentier capitalism. A rentier, he says, ‘is someone who gains income from possession of assets, rather than from labour’, while a rentier corporation ‘is a firm that gains much of its revenue from rental income rather than from production of goods and services, notably from financial assets or intellectual property’. In the US between 1980 and 2000, the share of income going to profits in non-financial sectors fell, while rentiers flourished. Eighty years ago, Keynes referred to the forthcoming ‘euthanasia of the rentier’, but this has emphatically not happened.

Furthermore, a new class structure has arisen, including a plutocracy and elite, a salariat in relatively secure jobs, freelance professionals, a core working class and a precariat, who are mostly working as taskers in the gig economy. There is no united working class, Standing claims, and any movement against rentier capitalism must be led by the precariat. He states that Corbyn’s victory in the Labour leadership election was based largely on his appeal to the precariat, though no evidence for this is offered.

His proposal for what should be done involves ending much of the special features of rentier capitalism, such as subsidies and tax breaks for the rentiers. The labour market should be made into a free market, with employers and workers having roughly equal bargaining positions (which is a real pipe-dream). He is associated with the Basic Income Earth Network (basicincome.org), and suggests paying a ‘modest monthly sum’ to everyone.

But all this really would leave the real class nature of capitalism unchallenged. There is very little here about non-financial capitalists who, after all, also derive their income from ownership of assets rather than their own work. The companies they control provide goods and services, but the wealth of their owners is still based on profits and exploitation.

One last point: it is an old observation that at least the capitalists cannot charge us for the air we breathe. According to one passage here, however, this appears no longer to be the case: the air in parts of China is so polluted that a Canadian company is selling bottled mountain air from the Rockies to Chinese city-dwellers at $10 a bottle.