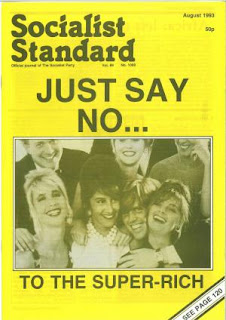 From the August 1993 issue of the Socialist Standard

In last months issue we showed how most economics textbooks bolster capitalism by unsupported claims such as “consumer wants are unlimited" and entrepreneurs are vital to production. Here we shall look at what another economist has to say, about the causes of poverty.

Writing in International Sociology in 1986. Erich Weede offered an explanation of “why the poor stay poor". The basis of his theory is what he calls “rent-seeking”, part of a free-market theory. We must warn you that study of these matters will seriously damage your patience with economists. But press on.

A trio of economists who sound more like a firm of solicitors (Buchanan, Tollison and Tullock) define rent as “a payment to a resource owner over and above the amount his resources could command in their next best alternative use". All right so far? No. well never mind—it will become clearer:


In a truly competitive market where everyone is a price-taker, rents do not exist. Therefore rent-seeking is an attempt to distort markets and to evade competition. Where rent-seeking is on the rampage, we refer to rent-seeking societies. The fundamental problem of rent-seeking societies is that they suffer from a serious distortion of incentives. There are strong incentives to engage in distributional struggles and to seek contrived transfers, but comparatively weak incentives to engage in productive and growth-promoting activities. While rent seeking decreases growth, there is no reason to expect the poor to be particularly successful in distributional struggles.

Let’s try to unpack all that. In a truly competitive market (which exists only in economists’ heads) everyone buys and sells what they have at the best price they can get, and they all live happily ever after. But people are nasty enough to seek “rents". Instead of producing things, they try to make a profit out of other people producing things. If you can organise “contrived transfers” (buy something cheap or sell it dear) you’ll get rich. Otherwise you’ll stay poor.

Not a word from Weede about the biggest contrived transfer of all: that of the capital-owning class buying the ability to work of the working class and making a profit out of selling what that labour produces. The theory of “rents” enables the existence of such exploitation to be neatly sidestepped. It also puts trade unionists in the same camp as monopoly capitalists:

Trade unions are a special type of distributional coalition or cartel . . . workers need skilful political entrepreneurs to guide them, and the application of selective incentives and coercion . . . If workers succeed in obtaining higher wages than they could in a competitive situation, then employers are likely to offer less jobs.

So the theory not only explains poverty but also unemployment. Its all the fault of greedy workers.

Forget the class struggle between capitalists and workers. Instead, “there is a conflict of interest between urban and rural populations”. Then we are let into another secret of success: “In a conflict of interest between groups the recipe for successful collective action and overcoming resistance is to generate concentrated gains for a relatively small group and diffused and preferably invisible losses for a much larger group”. We just have to be smart enough to realise that what Weede says about urban and rural "populations” really applies not to them but to capitalists and workers.