Computers in a socialist world (1987) 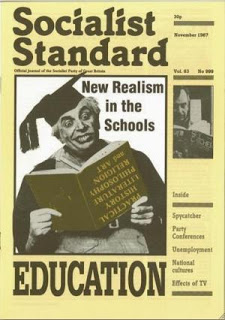 From the November 1987 issue of the Socialist Standard

Since most computers are owned by capitalists, they reap the benefits of computer technology. Computers are used in "defence" (Star Wars, controlling guided missiles). finance (calculating bills, cash vending machines) and industry (controlling robots, designing products). There are other uses but these are the main ones. There are some workers who own computers, but these are toys. If you disagree, try borrowing a factory from a capitalist and running it with your computer.

Eventually, the penny will drop for the wage and salary earners of the world and then the means of producing and distributing wealth will belong to everyone. This will mean that computers will be used to satisfy the needs of everyone. It is not possible to predict exactly the uses to which computers will be put, because it all depends on the will of the majority of people at the time and none of us is a mind reader. But it is useful to think about what computers could be used for, because this gives us an insight to what socialism could be like. The possible uses are:


Matching production to needs:
If you want to know what people need, you ask them, or better still, arrange for a computer to ask them for you. It saves you travelling all over the world, asking monotonous questions such as: "Do you use aftershave?" — useful information for someone who does his/her bit by brewing aftershave. In turn, the aftershave brewer could enter into the computer the raw materials that are needed and in what amounts. The computer would transmit this information to the suppliers. And so on. Of course, you could use the Post Office. A computer does the same thing, only quicker (for a more detailed account of such a system, see Socialist Standard, July 1984. p.131).

“Electronic democracy”
No, this is not a souped-up version of the BBC's Election Battleground. If a computer can count aftershave users, it can also count votes cast for and against any proposal presented by any person, such as "Should we continue making aftershave?" Cash vending machines and telephones could be voting machines. In the evening, the aftershave brewer could turn on the TV and see the result. This system can also be used to elect and instruct delegates. It is likely that the system will be hierarchical, a local computer counting votes for local proposals, a regional computer counting votes for regional proposals and a world computer counting votes for world proposals. Bigger decisions affect more people and so would be decided on higher up the hierarchy. A TV channel could be dedicated to listing the "decisions of the day” in the morning and reporting on the results of the poll in the evening. This system could be implemented today. Ask yourself why governments which spend millions on supposedly defending democracy are not willing to spend even thousands implementing it.

Automation of dangerous or unpleasant work:
There will always be dangerous or unpleasant work that needs to be done. It will be possible to automate work that produces essential goods and services. The technology to do this has existed for several years. Robots can now assemble cars, manufacture computers. make furniture and so on. More recently, computers can mimic workers that make decisions according to rules, such as quality control inspectors, lawyers and doctors. The reason some work is not automated yet is because it is still unprofitable to do so. But the technology is there, waiting to be used should society decide to use it. For example, if our aftershave brewer decides to grow bananas for a change and no replacement was immediately available, he/she could see an expert systems programmer. This programmer would write a programme that would instruct the computer to operate the aftershave brewery. Should the ex-aftershave brewer get nostalgic, he/she could always return and pull the plug on the computer.

Others that you can think of . . .
The building blocks for constructing the computer systems described above have been available from up to ten years ago. What you have read is not science fiction. It is fact. World-wide computer networks exist today. They are used by companies, especially multi-nationals, in order to co-ordinate their activities and to communicate with each other. The hardware is already in place. All that is necessary is for programmers to reprogramme the computers to perform the tasks described in this article, should that be the wish of the majority of the people at the time.

Defenders of the capitalist status quo tell people that socialism is not workable. They think that workers are not intelligent enough to run a system of production for use, one where there are no followers and leaders but a system where everyone co-operates in decision making. They forget that workers are intelligent enough to perform the tasks necessary to run capitalist society. It is workers who design, build and operate computer systems. When the wage and salary earners of the world, the working class, want socialism they will have it.