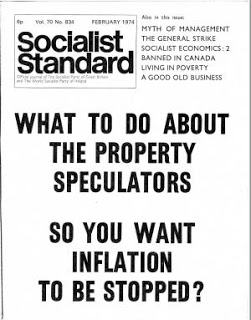 From the February 1974 issue of the Socialist Standard

Death-Knell of the British Communist Party
Have you ever wondered, dear reader, why so many prominent trade-union leaders are ex-Communists? Lawrence Daly of the Miners, Scanlon of the Engineers, Frank Chapple of the Electricians, and others: all ex-Communists, one-time members of the CPGB — but now, having attained high union office, no longer so.

The explanation is quite easy, when you know the history of the Communist Party; not as written by its hired hacks, but its real history. It goes back to the very inception of the Communist Party in this country in 1920, when Lenin wrote a little book called Left-Wing Communism. Lenin, knowing the slender thread by which the Bolsheviks’ power hung, insisted that Communists everywhere should penetrate other organizations to remain existent in the face of persecution.

The most important organizations which the Communists had to infiltrate were the trade unions. There were no lengths to which they would not go to “remain in and influence the Trades Unions”. All methods, including if necessary “lies, trickery and deceit” (Lenin), had to be used for this.

Left-Wing Communism quoted a letter written by W. Gallacher from Scotland to Sylvia Pankhurst’s Workers' Dreadnought, stating that workers’ political parties were useless and that workshop Committees were the answer. Obviously Gallacher, working in Glasgow heavy engineering, was strongly influenced by American De-Leonist industrial-union propaganda (he had spent some time in the States) which was specially attractive in the conditions of the first World War. Lenin got Gallacher to Moscow (and Jack Tanner and Dick Beech — who, however, didn’t buy it) and made him promise to go back and help form a political party pledged to the Bolsheviks’ insurrectionary methods, to try to eventually seize power on the Russian model.

The inevitable side-effect of this policy is secret conspiracy (the so-called “illegal activities”) and the organization of undercover “fractions” to influence and, if possible, control neutral organizations. This the British CP immediately started to do; with, it must be admitted, considerable success. These activities were run by the so-called “Industrial Dept.” of Harry Pollitt and were his first major assignment in the Party.

At first the unions were a sitting duck for the treatment. It was too dead-easy. Notoriously, the vast majority of union members join to protect their jobs. In many trades, the union card is the job-ticket. Frequently, a union branch with several hundred members would attract (and still does) a small handful to its business meetings. Except those intent on office, or who liked the sound of their own voices, the membership was (and still is) dormant. It was partly for this very reason that Gallacher, Murphy and others were right in pointing out the superiority of workshop committees, where everybody was present and could discuss and vote on the spot.

Side by side with the organization of the CP “fraction” went the ostensible aim at the trade-union branch meetings. This was dead-easy too. All you had to do was move “militant” resolutions demanding action for more money, shorter hours, or easier conditions; or, more popularly, the replacement of notoriously corrupt officials (e.g. Jimmy Thomas) — and you had it made.

Part of this process was inevitably nomination of your “progressive”, “militant” type against the old “reactionary”, “indolent”, “corrupt” sitting tenant. Your Goodie against “their” Baddie! Obeying Lenin’s instructions lies, trickery and deceit were unscrupulously used (as in the notorious case of the ETU where Communists were caught red-handed destroying opponents’ ballot papers). The CP apparatus in the unions offered a ready-made band waggon for careerists and job-hunters — until the reaction set in, and anti-CP fractions ousted the CP’s own. Before this, a dozen or so resolute organized Commies could pass resolutions in the name of hundreds, even thousands.

In the early days the CP boasted that it had effective control of most of the influential District Committees in London, and the London Trades Council, besides the Glasgow Trades Council and many similar bodies up-country. And so, on the face of it, what could be simpler? The Party would control the unions; the unions would become more “militant” as the Party stepped up their demands; and eventually the “Dual Power” (on the model of the Petersburg and Moscow Soviets) would be established. After an intervening period of conveniently inept Labour (Kerensky-type) government, “all Power” would pass to the British Soviets — controlled, of course, by the CP. Like that — hey presto !

Then suddenly, History took a hand. The economic situation worsened, a slump occurred after the Labour Government of 1924, the Baldwin government had to subsidize coal production. By 1925 the employers were demanding wage reductions and longer hours for the miners. The trade-union movement tried to counter this by forming the “Industrial Alliance” of the biggest unions to support the miners. After a statement by the Government that it intended implementation of the terms of its Commission on the Mining Industry, the special meeting of TU Executives called for joint action in support of the miners on 3rd May, 1926. The General Strike was on. 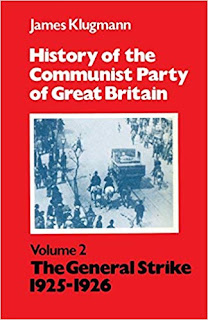 This was the CP’s heaven-sent chance, its golden opportunity. As the official historian of the CP wrote, “they were now going to challenge the power of the political State machine.” The Theses of the Comintern “On the Lessons of the British General Strike” declared:

The Councils of Action organized by the Trades Unions developed into district Soviets; its departments resembled the departments of the Petersburg Soviet in the period of the so-called “Dual Power”.

(History of the CPGB, J. Klugmann)

On 5th May 1926 the second issue of the Communists’ Workers’ Bulletin stated:

According to the Government wireless a few soldiers at Aldershot refused to entrain for an industrial centre.. From another source we learn that it was nearly the whole battalion. It is reported that the Welsh Guards are confined to barracks for insubordination.

Of all the self-deluding moonshine put out by the CP, this probably ranks among the biggest lumps of wish-thinking it ever achieved. There was not the slightest evidence for the statement that the troops supported the strikers. In fact, then as now, all the evidence sustains the opposite view — that in the event of a head-on clash between unions and the State, most people (the electorate) would support the government. But this would not worry the British (ersatz) Bolsheviki; for, to do it like the Russians, you did it with a minority anyway.

What actually happened? The 1926 General Strike was the death-knell of the CPGB. Its policy a ghastly failure, the miners driven back after six months’ self-starvation, it now denounced its erstwhile darlings the miners’ leaders A. J. Cook and co. (and Cook an ex-CPer !) as “traitors”. From 1926 on, its membership steadily declined. It has now officially adopted Parliamentary methods as “the way to Socialism in Britain” (no Soviets !) and become the target of the numerous Trotskyite split-away groups who, learning nothing from mistakes, denounce it as “reformist" which it always was anyway.

In his History of the CPGB J. Klugmann still flogs the ridiculous notion that the workers "learn more in a few hours” by striking than they do “in normal times” from Marxist theory. What they should have learnt from the General Strike was that it ended in disaster. The CP has paid the price of its stupid, mistaken ideas. Political strikes to oust governments are futile. If the strike is strong enough to win, it is unnecessary. The idea that working-class political power can be won or maintained without conscious political knowledge by an electoral majority is a costly fallacy.

What then remains of all the sound and fury of those hysterical halcyon yesteryears? Only Frank Chapple, Hugh Scanlon, Lawrence Daly and several Uncle Tom Cobleighs who, having been helped to their jobs by the CP “fractions”, promptly left the CP.
Horatio
Posted by Imposs1904 at 7:53 AM

'Horatio' (Harry Young) was a founder member of the CPGB and, as its YCL representative, he was on the CP's first Executive Committee. He was an active member of the CPGB all through the 20s and 30s - spending a major portion of the 20s in the Soviet Union - and would have undoubtedly known a number of the CP figures from its early days mentioned in the article.

To be honest, I find the article a bit of a curate's egg. Though it's not listed as such, I wonder if it initially started out as a review of James Klugmann's second volume of his official history of the CPGB. Hence the various mentions of Klugmann's book in the article.

The problem with the article is that if you were judging it as a general overview of a history of the CPGB from its formation up until the present day - 1974 - you'd come away thinking it was littered with mistakes. But if you look at as a history of the CPGB in the 1920s, then it's factually sound. The CP did experience a massive surge in membership in the midst of the General Strike and the supposed 'revolutionary situation' but once the strike collapsed - and the miners' were starved back to work on worse terms months later - the membership of the CPGB fell away. A couple of years later the Comintern adopted its 'Third Position' class against class stance and the CPGB were further marginalized.

In fact, it was until the second half of the 30s, with its adoption of popular front politics, that the CPGB once again experienced real substantial growth and during the war - post Nazi Germany's invasion of the Soviet Union - the CPGB's membership peaked at around 55,000. A number of the ex-communist trade unions leaders that 'Horatio' mentions in the opening of the article were recruited to the CP during this latter period.

I think, unfortunately, 'Horatio's' knockabout style in the article, where he leaps from the history of 1920s CP to present day CP practice, leaves the article open to misinterpretation. I would hazard a guess that the Socialist Standard Editorial Committee at the time may have not been as rigorous with the 'red pen' with Horatio's article because of his background in the CP during the earlier period under discussion. It's noticeable that he adopted the same knockabout style in the 70s when writing other articles and reviews about the CPGB and the other groups that made up the Leninist Left in Britain at the time.