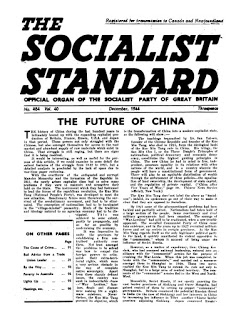 From the December 1944 issue of the Socialist Standard

The writing is on the wall. Victory for the Anglo-American capitalist class and defeat for its German counterpart. Once more the Governments of France, Belgium, Holland are about to return after four years in London, presumably controlling the underground movements in their respective countries. Queens are returning from Canada, and Kings and Princes are polishing their buttons and medals, and shaking the moth-balls from their best uniforms, ready for the victory parade. At this stage one could ask what it was in the first place that induced them to leave, but that would create a certain awkwardness, to say the least. Besides, who are we to doubt the bravery of the ruling class?

Older members of the working class, with not too short memories, will remember the victory parades of the last war—the military displays, the victory balls, bands playing, flags waving, etc., etc. Perhaps, too, they will remember the days of the General Strike and the slump years of the late twenties and early thirties, when the ruling class made wholesale onslaughts on their standard of living—the dole queues, the hunger marches, the means test.

This was the interlude between the two world wars, and even to the most obtuse members of the working class it must have been painfully obvious that there were two classes in society, and that they (the working class) were to have all the pleasures and thrills which accompany job-seeking, bringing up a family, paying rent, and in general keeping the proverbial wolf from the door. For the capitalist class there was roulette at Monte Carlo, a bungalow on the Riviera, the playground of Nice, a trip to the Mediterranean or Florida.

Sun-chasing has been a popular pastime with our masters. In latter years several of these places have proved just a bit too warm, so they have had to content themselves with a shooting lodge in Scotland, a fishing trip on the lochs, or maybe a few racehorses.

The contrast between the classes is so striking that one constantly wonders why it is that the most useful section in society, the working class, don't set about the job of finding a solution to the problem—that most peculiar problem of poverty in the midst of plenty. This social phenomenon has its roots in the capitalist system of production, and will persist as long as capitalism persists. Sooner or later the workers will tackle this state of affairs, and we feel sure of the result. A social system which breeds slums, disease, malnutrition, poverty and war must go, and capitalism as such cannot possibly survive without the acquiescence of that overwhelming majority—the working class. No doubt its demise would come much quicker were it not for the existence of reformist organisations, who, even granting them the best possible intentions, do no more than cloud the issue and generally land up either hand in glove with the capitalist class or else go out of existence.

The black-out has been replaced by dim-out. but we are very much afraid that when the lights finally go up they will illuminate the same old sombre surroundings, the filthy poverty for the wage slave, the wealth and opulence for the capitalist parasite. To prophesy in detail is both foolish and dangerous and would avail nothing, but we in the Socialist Party of Great Britain are not posing as political Isaiahs when we say that the transition from war to peace will not be the smooth running affair that our politicians, and planners fondly imagine. The working class have been subjected to all sorts of controls and anti-working class legislation. These they have accepted with little or no demur. They have watched the formation of new political groups, the political chicanery of others—life-long enemies drinking each others toasts and becoming friends and bed-mates.

The trend of events plus the attendant inconsistencies and contradictions of capitalism at war has given the worker food for thought, sharpened his political wits, and in general made him more wary. Consequently the task of changing the wartime harness for the peacetime chains isn't going to be an easy one. and the apostles of the status quo and "the good clean healthy competition” school are going to have a. few spanners in their planning mechanism before this delicate operation is over.

Without being unduly optimistic, we regard this as a healthy sign because workers who are critical of existing conditions will be more receptive to the Socialist idea; and will ultimately join with the S.P.G.B. in working for the abolition of capitalism and the establishment of Socialism. In the meantime our advice to workers of all lands remains unaltered. Comrades, arm yourselves with the most potent of all weapons—Socialist knowledge.