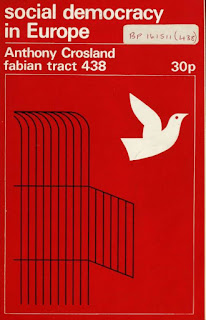 From the January 1976 issue of the Socialist Standard

Anthony Crosland, Labour Cabinet Minister and “guru” of the moderate wing of the Labour Party (vide The Observer) has delivered a lecture, at the invitation of the President of Costa Rica (another “socialist”?) on the above theme. It has now been published by the Fabian Society — who else? — and, as it is an artful ploy to kid Labour voters, it calls for a reply from us.

First, it will be noted that Crosland has his very own special brand of Socialism. Socialists have always held that Socialism is definite and unique, like oxygen or silicon: not so! says Tony. But, if everybody is inventing his own brand of Socialism, it ceases to mean anything and is all things to all men — as befits a Labour Party. One difficulty that arises when you run round inventing your own do-it-yourself Socialism is that you have to indicate what you mean, so that the others will think they know what you are talking about.

This our “guru” kindly did. Socialism (Crosland variety) is (1) a set of aspirations which socialists wish to achieve, (2) the relief of the poor, (3) a wider equality in the distribution of property. (Taken from “Social-Democracy in Europe” by A. Crosland, Fabian Society.)

Anybody who has read two issues of the Socialist Standard could tell Crosland that this piffle has nothing to do with Socialism. And a good few who’ve never read it at all — in fact, Disraeli or Gladstone would have agreed with it; in public anyway. It is nothing but good old Liberal (or Tory) baloney.

Stirring manfully to give his vapourings a semblance of reality, the “guru” has to drag in Karl Marx. Social-Democracy, he declares


requires, and indeed can be defined as the nationalization of the means of production, distribution and exchange (sic).


The ownership of the means of production is not now the key factor which imparts to a society its essential character.

Apart from the absurdity of the obsolete notion that nationalization has anything to do with Socialism, this does not even tally with the notorious claims of the Labour Party constitution, which states nationalization (“public ownership”) as one of the party’s numerous objectives.

The artful trick consists in implying that Marx advocated this (nationalization or state ownership). Marx did not. He was crystal clear about it. And in case Crosland is kidding anybody — as the old- time Commies used to try it — that because the very first edition of The Communist Manifesto contained a demand for nationalization, that Marx was a “nationalizer”, the explanation is perfectly clear as Engels indicated in the last edition.

These demands were aimed at a fragmentary, underdeveloped continental transport and industry, and considered (rightly or wrongly) progressive by Marx in 1847. In subsequent polemics with the German social-democrats Marx, and particularly Engels, emphatically denounced the claim that state ownership was Socialism. Engels wrote in Anti-Dühring:


Recently, however, since Bismarck adopted state ownership, a certain spurious socialism has made its appearance — here and there even degenerating into a kind of flunkeyism — which declares that all taking over by the state, even the Bismarckian kind, is in itself socialistic. If, however, the taking over of the tobacco trade by the state was socialistic, Napoleon and Metternich would rank among the founders of socialism . . . Otherwise, the Royal Maritime Company, the Royal Porcelain Manufacture, and even the regimental tailors in the army, would be socialist institutions.

Our lecturer proceeds to inform us that the dictatorships were easily the most inefficient regimes during the last war — which we have been telling left-wing insurrectionists for years. But this is the lead-in for the suggestion that the “Communist State” has something to do with Marx and Socialism; whereas actually the dictatorship was the invention of one Lenin.

We are treated to a few figures (no Fabian lecture complete without them!) which purport to show that “the trend” is in the right direction. There is less inequality, he claims, because the Diamond Report showed:


“‘That the top 10% of earners now command only 21.4% of total personal incomes, compared with 34.6% before the war.”
“That ownership of capital by the top 10% has fallen considerably, and the top 1% very markedly.”

— and that this re-distribution continues. Now these figures by themselves are extremely suspect; and can be juggled to almost any result required, by ignoring inflation and taking special periods (e.g. post-war boom).

But even accepting all his statements — so what? Is this Socialism — that a few rich capitalists have become comparatively less rich? or a few wage- earners less poor? How long before the next figures completely refute this lot?

We now come to the guts of the matter. Crosland says this “statistical evidence” is confirmed “by our own experience”. The beaches in Spain are crowded with “working people, enjoying the pleasures previously reserved for the few”. And (here we go again) "the motor car has brought new freedom to millions of people”.

Right back to the old “the workers are better off” syndrome. Incidentally, thousands of workers today complain that the motor car keeps them poor, not “free’. But what is all this but the hoary old rigmarole of the Theory of Increasing Misery in reverse? Marx wrote that the workers would sink down into ever-increasing poverty — and they haven’t — so there!

First, Marx never wrote anything of the sort. What he did write was:


Along with the diminishing number of the magnates of capital . . . grows the mass of misery, oppression, slavery, degradation, exploitation; but with this too grows the revolt of the working class, a class always increasing in numbers, and disciplined, united, organized by the very mechanism of the process of capitalist production itself.
(Capital, Vol. I p. 836, Kerr edn.)

Yes! the modern working class has cars, washing machines, colour telly, hot water, and Kentucky Fried Chicken, because this is 1975, not 1875; and because the capitalists spend millions kidding the workers to buy these things (they go broke if they don’t); and because sheer technical progress enables cheap production in factories in thousands instead of ones in laboratories.


A house may be large or small; as long as the surrounding houses are equally small it satisfies all social demands for a dwelling. But let a palace arise alongside the little house. It shrinks from a house into a hut. Its owner now has no redress however high it may shoot up, if the palace grows to a greater extent, the small house owner will be cramped and dissatisfied.
(Wage Labour and Capital)

What is Marx saying? Suppose two men on ladders, one on the bottom rung, the other on the tenth. If while the bottom one moves up ten rungs the top moves up as well, their relative position is unchanged. The top-dog is still the same degree higher than the bottom dog.

“The contradictions of capitalism today are not those analysed by Marx 100 years ago”, says Crosland. The contradiction of all the contradictions which Marx analysed was that between wage-labour and capital, now rapidly engulfing the last continents of this earth. Crosland’s panacea for all this, his kind of Socialism, is “more industrial democracy”.

In the immortal words of Joe Bloggs: What a load of rubbish!