Racism and Nationalism, or Socialism? (1978) 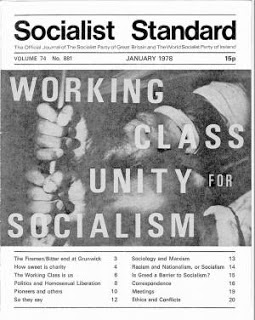 From the January 1978 issue of the Socialist Standard

Living under capitalism with its attendant social misery, poverty and unemployment, where working-class housing and education are in a permanent state of chaos, scapegoats become an essential part of the set-up. Finding something or someone to blame is the easy answer for those who take a crude and superficial view governed by emotions rather than facts.

It is yet another contradiction of the system that the capitalist class cannot control the excesses and side-effects of their own propaganda. They din patriotic poison into workers’ heads in order to produce national conformity, only to find they cannot just switch those attitudes off when they want to recruit labour from overseas. National-mindedness is completely opposed to the real interests of all workers. It leads them to identify with the interests of the capitalist class and to line up behind the commercial ambitions of that class.

This means workers being willing to die in wars to maintain vested interests and profits. It means taking on the business worries of the owning class and, in times of crisis, regarding Japanese or Germans or any other rivals for world markets with resentment; and to prefer that Britain should be top dog and the others suffer the worst unemployment. Such loyalty, bolstered by fear and insecurity, is dangerously misguided. The ideology of nationalism is divisive and dehumanizing.

Struggle for jobs
How is a slogan such as the National Party’s “British jobs for British people” to be interpreted? Are they saying that immigrants are not British and should therefore have no jobs in Britain? Do they want these workers kept on so-called Social Security, or sent out of the country? It is a slogan for the slave.

What are “British jobs”? Working for American-owned Ford or General Motors, or for a British company overseas? Capital is international. The owning class get in wherever they can, so long as profits roll in, they care not from where. The workers of the world carry the capitalists of the world on their backs. They should concern themselves not with the colour or nationality of those who exploit them, but with ending exploitation.

Leftists like the Communist Party and “Socialist” Workers’ Party indirectly promote the same mentality as the NP and NF. Slogans like “Work not dole” and “The right to work” are taken up by the nationalists, who merely add: “If all these immigrants were not here we would all have work.” In fact repatriation—now called a fascist policy by the left—was advocated by the Communist Party itself. When the employment of Polish immigrants was discussed in the House of Commons in 1947, the Communist MP William Gallacher declared: “Let them get employment in their own country.” (Hansard Vol. 432, col. 1555.)

In the same year a booklet was published by the Communist Party called Looking Ahead. Harry Pollitt put the question:

Identical to the pernicious non-sense now being churned out by the National Front. Perhaps the CP would make the distinction that the NF direct their policy against people who are black? Then they might tell us where the same policy is different when directed against people because they are “displaced” or come from Poland.

Ends of the Earth
The whole of politics under capitalism, being built upon lies, twisting and the promotion of petty personalities, is pretty squalid, but the attempt to cash-in on the crudest class-ignorance in the form of racist ideas is the low-tide mark of that squalor. Enoch Powell gambled that this tide might sweep him into power. None of the trends he forecast has come about. Nothing he has predicted has happened. In one of his dark warnings we were threatened with “rivers of blood” as a consequence of black people continuing to come to Britain.

This appeal to the basest of emotions ignored the fact that the major tensions which exist (and not just between black and white people) are produced by capitalism. Powell, like all professional politicians and leaders, is prepared cynically to exploit the ugly effects of the system for his own advantage—having, in office, demonstrated his inability to control that system.

It is one of capitalism’s hypocrisies that socially useless people like professional politicians spend their time telling workers to work harder, while they and the parasite class they represent live well on the proceeds. Compare the contribution to society made by a black (or white) nurse with that made by Enoch Powell.

The British capitalist class in their quest for profits went to the corners of the earth with bible and gun, grabbing a vast empire. When the empire was at its “greatest”, the misery and the numbers of unemployed were also at their greatest. Extreme poverty was rampant, tuberculosis was endemic, and there were constant wars and crises. Today the killer diseases are different, but otherwise capitalism is the same. The British workers owned no empire; even the pawnshops and barrel-organs were not theirs. Today workers, whether black or white, British or “colonial”, still own no country.

Colour
In America, fear of the black man was (and remains) a direct outgrowth of the poverty inflicted by capitalism on “poor whites”. Under that pressure, with an admixture of ignorance, their conduct sank to a sickening level. The upsurge of the advocacy of “black power” in recent years can only be understood as the backlash. But separation, whether imposed by whites or sought by blacks, can solve none of the problems engendered by capitalism. Karl Marx, falsely depicted by the capitalist press as the architect of class hate, gave as his favourite maxim “I regard nothing human as alien to me”. The same propaganda machine which vilifies Marx spreads nationalist poison and justifies nuclear stockpiles.

In 1977 there was a sharpening focus on “racial” issues, particularly in the period of the County Council elections. The Labour Party’s loss of support through some workers turning to more extreme nationalist groups led to a demand in the Lambeth Labour Party to ban the National Front. Leftist organizations formed action groups to “fight racism”, and published leaflets containing much factually useful information (largely culled from the Office of Population censuses and surveys).

The way some of the information is used, however, shows that these groups either seek to calm nationalist emotions or share the same emotions themselves. They stress that only 11 per cent. of the population here are immigrants and compare this with higher levels elsewhere; only 1¾ million black people live in Britain, only 4 per cent. of Asians live in council houses. The note of apology is hard to miss. Yet while workers dispute with one another their “right” to move from place to place, the capitalist class own the earth.

A National Front leaflet ignores the official figure of 3½ million immigrants and claims there are 6 million. A photograph of four black faces is supposed to support the lie. In fact there are 1¾ million. Such statistics, on both sides, attempt to prove or disprove an irrelevance.

The Solution
The idea of banning or restricting the NF has gained further impetus with marches being outlawed in Manchester, the hire of civic halls to them forbidden in Islington, and the Labour Conference discussion of how to ban some marches and allow others.

The statement by Merlyn Rees typified the Labour Party fallacy that reform legislation can remedy the effects of capitalism. He favoured amending the Public Order Act (as if this Act has produced public order!). He pointed to the Race Relations Act which makes it an offence to say or do anything to incite race hatred. He seems to believe that racism is produced by the National Front. The reverse is true.

Wrong ideas cannot be banned, and trying to ban them is itself a wrong idea. It seeks to treat the effects, not the cause. Only in unfettered debate and open discussion can erroneous ideas be exposed and answered. The Labour Party fears that process as much as the National Front.

Nothing short of removing capitalism can get rid of its antagonisms. As workers gain an understanding of Socialism they will leave behind bigoted ideas about colour, race and nationality. They will pursue their own interest not as blacks or whites, Britons or "foreigners”, but as workers. In so doing, they will free themselves from the bondage of wage-slavery. When the system of exploitation and poverty is ended, the perverse ideology which supported it will also have disappeared.
Harry Baldwin


From the February 1978 issue of the Socialist Standard