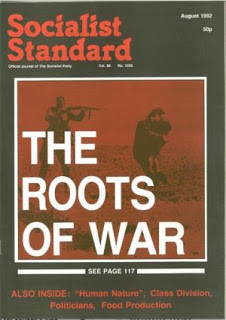 From the August 1992 issue of the Socialist Standard

Under capitalism goods are distributed as commodities through markets and this—what can be sold at a profit—determines what is produced. The key determining factor is market capacity, and market capacity cannot be controlled. In previous societies people controlled production to the best of their abilities and what they produced determined what could be distributed.

Under capitalism the position is reversed. What can be distributed, as sales on markets, determines what can be produced and also the way it is produced. This is a unique and highly dangerous feature of capitalism as it is this absence of control that is a basic cause of all the risks we are running with the destruction of the environment.

We’ve got to reclaim control over production. In socialism this will be democratic control and the only way we can get it is by establishing common ownership. We’ve got to begin that control by first consciously agreeing to abolish the profit motive, markets and the wages system. We’ve got to agree to have goods produced directly for people’s needs through voluntary cooperation.

Cooperation to produce goods directly for needs is not something new. This was how people sustained their social life for thousands of years. We need to get back to it, though at a much higher technological level and also with a vastly increased volume of production.

What do we mean by needs? This cannot be treated as a purely abstract issue outside any historical context. A sensible approach is to ask: Does capitalism produce everywhere in the world enough good quality food, clothing, housing, water and sewage systems, cooking facilities, energy for heating and lighting, health and education services, books, radio and TV, entertainment, and means of travel?

If people had secure use of all these things most would say they were well set up. Obviously capitalism falls a long way short of providing them for every person on the planet. What this means for production in socialism is that, to begin with, the supply of goods and services would have to be greatly increased. This in turn means that the means of energy supply, manufacture and transport will also have to be greatly increased.

One example can be given.

At least two-thirds of the world’s population of 5 billion live in sub-standard housing conditions which range from generally inadequate to the primitive, dangerous and disgusting. Think of Mexico City with its millions living in shanty towns and you get a vivid idea of the scale of the problem. So socialism would have to go in for a colossal building programme.

We are not just talking about buildings, bricks and mortar, roof tiles, and glass. The modern idea of decent housing includes all the necessary services like sewage and sanitation. piped clean water, electricity or gas, and also consumer durables like cookers, refrigerators, central heating, air conditioning in the tropics, telephones, etc.

Before you can produce this enormous quantity of materials for building and all the components for the required manufactured goods—as well as the extra tractors, harvesters, irrigation schemes, etc for increasing the supply of food—you first have to produce increased means of production.

Production for needs on a world scale is going to involve a vast increase in every part of the useful structure of world production: agriculture, mining, manufacture, the chemical industry and transportation. The concept of world production is very important here because what socialism must do can only be achieved through the largest possible scale of production using a worldwide division of labour.

Further, the division of the world into rival capitalist states has resulted in a world structure of energy production that would be unsuitable for socialism. America. Britain, France and Russia poured massive finance into the development of nuclear weapons and in doing so created a huge military/industrial nuclear base. In order to try and get something back out of this colossal financial outlay they decided to make some economic use of the technology, the plants and the skilled labour by building nuclear power stations.

In view of the problems involved—the dangers of running them and the build-up of radioactivity in the environment—no society in its right mind would go in for energy based on splitting the atom, but the economic and military strategies of rival capitalist states has resulted in a distorted and highly dangerous structure of world energy production.

Burning fossil fuels to produce energy also causes pollution and creates the threat of global warming. The risks we are taking with this are incalculable. No one can anticipate a possible point where an alteration in the make-up of the atmosphere could set off a chain reaction which could lead to great changes in the environment that would be a disaster for humankind.

So this is something else that socialism would have to deal with. We've got to add care of the environment to the list of needs.

Meeting needs
Socialism will have a number of advantages in dealing with these problems.

Firstly, the really great difference will be that instead of functioning in a dehumanised way as objects of exploitation within the wages system generating profit and capital accumulation for their exploiters, people will be freely cooperating with each other to do what was necessary for the community. The whole method of organisation would be through democratic control. People will decide what must be done and they will be free to get on with it solely for the benefit of everyone.

Secondly, socialism will remove vast amounts of waste. That capitalism is a society of fantastic waste was put very well by Marx:


The capitalist mode of production, while on the one hand enforcing economy in each individual business, begets by its anarchical system of competition, the most outrageous squandering of labour power and of the social means of production. not to mention the creation of a vast number of employments, at present indispensable. but in themselves superfluous.
(Capital,Volume I. chapter 17. section 4).

The precise amount of labour that would become available for useful production in socialism is very difficult to judge but, at a rough estimate, it is likely that socialism could double the number of people available for this. The waste in terms of mining, manufacture, transport and energy supply that goes into the war machine and to servicing activities like insurance, finance and banking could be diverted into useful production, reducing the amount by which total production would need to be increased.

A third important advantage that socialism would enjoy would be the freedom to select and use production methods strictly on their merits. It would not matter that a desirable method might use more labour than an undesirable one. The selection and use of production methods will be free to take into account a broad range of needs, including the enjoyment of work itself, care of the environment, conservation of materials, social safety and animal welfare.

The fourth advantage that socialism would enjoy is that it will be free to use the planet as a single productive unit. This will follow from the establishment of a common interest amongst all peoples, and it will tend to make for a safer and more rational use of the Earth’s resources.

The problem of energy supply is one field where a lot of experts are saying that there must be world action based on global consensus. For example in 1983 Janet Ramage wrote in Energy: A Guide Book:


How about a world-wide electric grid? It could use underground and ocean floor superconducting cables, and the power could come from solar farms in the world’s major deserts. Ocean Thermal Conversion Plants in tropical waters, and wave power stations and wind turbine arrays in remote regions. No atmospheric pollution, no radioactive wastes, no use of valuable agricultural land or precious fresh water. Would it work? There are probably no insuperable technical problems. There is just one question. How do we get there from here?

Ramage understands as well as anybody else that a world-wide electric grid is impossible in a world divided between rival capitalist states. That is why she asks: “how do we get there from here?”

This is where socialism comes in as the only system that could provide the common interest amongst all people, and the cooperation, for the construction of such a world system of energy supply.

The longer term
To begin with, socialism will be constrained by the sheer pressure to deal with existing problems as quickly as possible. We've got to increase world food production as an urgent priority to stop people from dying. Equally urgent is the need to house all people to a decent standard of comfort. Initially this will require a huge increase in production and large-scale undertakings in the context of a world-wide division of labour.

But once the homes are built, and once all the services have been connected, then these will be in place and available for use for a very long time. You don't have to keep on producing them. The same goes for increased means of production.

On the basis of a number of reasonable assumptions—that population numbers reach some sort of stable level; that the means of production are not subject to constant innovation: that people make a sensible decision about the limits to consumption—a point will eventually be reached where we can say enough is enough. At this point production will begin to fall sharply.

When this position is reached it will have important consequences for planning, decision-making and organisation. If you are setting up a world energy system—perhaps a single world-wide electric grid as suggested by Janet Ramage—with inputs of current from various places and based on using the planet's resources in the most advantageous way, then that will require world action, with planning, decision-making and organisation through a World Energy Agency. But once it is in place, and all you've got to do is to maintain it in good working order, you no longer need planning and organisation on the same scale. World action diminishes, leaving people involved in their local affairs.

The same thing goes for food production. We need urgent world action to stop people from dying, but once this was done and large-scale projects like irrigation schemes were completed, this would allow local communities more latitude to make their own arrangements about local food production for local needs.

A practical long-term scenario is a society of zero growth with a fixed structure of means of production producing stable levels of goods for stable numbers of people; a conservation society which could work with a minimum loss of natural materials through things like recycling: a society where, because people will live in cooperation with each other, they will also be able to work in cooperation and harmony with the natural systems of the planet, and where the focus of social life will be mainly with the local community.