The Financial Times and Inflation (1976) 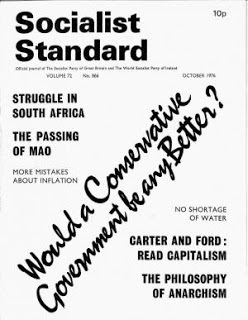 From the October 1976 issue of the Socialist Standard

For years the Financial Times has been offering a variety of different explanations of inflation. In an editorial “How Costs Get Pushed Up” (6th Sept.) it had another go.

It examined a number of theories, including that presented by the “monetarists” and Sir Keith Joseph, and discussed them. The point it made about the monetarists was that their explanation must be wrong because “wages and prices in this country began to accelerate after the unprecedented fiscal and monetary squeeze of 1968-70”.

Because of the superficial resemblance between monetarist theory and the explanation given by Marx it might be thought that the argument of the Financial Times against the monetarists would also prove Marx to have been wrong; but in fact the argument has no bearing on Marx’s explanation.

In brief Marx held that, in addition to the moderate rise and fall of the general price level in booms and depressions that takes place when there is no inflation (as in the 19th century) an excess issue of an inconvertible paper currency will send up prices. So why did the alleged “unprecedented monetary
squeeze” of 1968-70 not curb inflation?

The answer is that as regards the note issue no such squeeze took place. Using annual average figures of the notes and coin in circulation the increase between 1967 and 1970 was £401 million. This was not less but more than the £359 million expansion in the previous three years and has been followed by expansion of £1016 million in 1970-73 and £1782 million in 1973-76.

What the monetarists and the Financial Times have been looking at is not the currency, which is the key factor, but what the government calls “money supply” which is predominantly the total amount of bank deposits. Bank deposits have nothing to do with Marx’s valid explanation of inflation. There is no reason why they should be supposed to govern the price level, and the enormous increase of bank deposits in the last quarter of the 19th century was accompanied by a fall in prices.

The latest state of the Financial Times’s failure to understand inflation is its conclusion that the only way to curb it is “to reduce taxes on wages”.