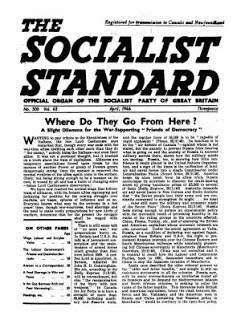 From the April 1946 issue of the Socialist Standard

Why do we speak of wage-labour? Because there are and were other kinds of labour for which no wages are paid. There is, for instance, the labour of a man working in his garden and the labour of a woman working in the house. People work for wages in order to get a living. In fact, for most people today it is the only way they can get a living. These are the people who do the work of society: till the land, make the produce of factories, bake the bread, drive the trains, lorries and ships. In times gone by other kinds of labour did this sort of work. In Greek and Roman times it was chattel slaves; people who were bought and sold like cattle or horses. In the Middle Ages it was bond slaves; people who handed over a large portion of their produce to the lords who owned the land.

What are wages? On the surface they appear, to be a payment for the actual work done, the thing produced. In reality, however, they are something else. When a man is paid wages he is paid to work for a certain time. He sells not his work, the thing he does, but his working power for a certain period, A weekly wage is payment for working for a week. When he receives his wages the worker buys food, clothes, housing accommodation and other things that are necessary to keep him alive and able to go on working. The workers' wages are therefore the means to exchange his labouring power for the things he needs. Just as the capitalist sells butter and battleships for money with which to purchase other commodities so the worker sells his labouring power, the energy contained in his brain and muscles, to buy the things he needs All things that are produced for sale are commodities. The worker’s labouring power is likewise a commodity which he exchanges for other commodities. There are certain important differences between the worker’s commodity, labour-power, and other commodities. But we will consider these differences later. First let us establish the commodity character of labour-power.


The wealth of society today consists of commodities, articles produced for the purpose of being sold. Some are displayed in shop windows with price cards attached, others only appear in price lists of different firms, others again are quoted when required. A battleship, for instance, has no price card, nor does it appear in a price list. When a government wants a battleship it asks the different makers of battleships how much they will charge for building one to a certain specification, and the cheapest price is generally accepted. Thus the things you eat and drink, the clothes you wear, the houses you live in, the trams, buses and trains you travel in, are all commodities. They are produced for sale and the object of the seller is to obtain a profit from the sale of them. The money received for the commodity sold is used to buy other commodities. So that what really happens is that one kind of commodity is exchanged for another and money steps in to facilitate the exchange. In other words commodities are exchanged for commodities, and the worker likewise exchanges his commodity, labour-power, for other commodities.

All commodities have one thing in common, they are the product of labour, they have been produced. The different values, or prices, of articles depend upon the different quantities of labour, measured by time, required to produce them. The values of all articles are determined by their cost of production in human labour, that is the quantity of labour time used up in producing them. It is essential to remember that labour-power can only be measured by the time it is in action. The value of a kettle is small because little labour time is used up in producing it. The value of an ocean liner is great because an enormous amount of the labour time of large bodies of men and women is used up in producing it.

The value of the worker’s labour-power, and hence the wage he receives, is determined in the same way as the values of other commodities, by the labour-time used up in producing it. Now this sounds strange as labour-power is not an article you see, like a kettle or a ship. It is the stored-up energy in the human body, and it is only expressed when in action, producing something. Also the capitalist does not pay for it until it has been in operation producing something, and then only for the time it has been in operation. A worker works for a week and the capitalist pays him at the end of the week for the week during which he has been working. The capitalist gets the use of the worker’s labour-power on credit.

Whence comes the worker’s labour-power? From the food he eats, and he must have clothes to wear and somewhere to sleep in order that this labour-power may be conserved and capable of being applied to producing something. He must also be able to bring up children to replace him as a producer when he is worn out. The cost of production of labour-power is determined by the cost of the food, clothing, shelter, and so forth, that is necessary to enable the worker to do the particular kind of work required. The value of labour-power is therefore equal to the value of what the worker needs in order to live and bring up a family. The worker sells his labour-power by the week or month for a sum of money that enables him to buy what he needs in order to live—he is a wage-labourer.

The capitalist employs the worker to produce commodities that are sold at a profit, and yet the value of these commodities is the amount of human labour required to produce them. Where does the profit come from if all commodities exchange at their values, including the worker's labour-power? How does the capitalist make money out of selling commodities? He cannot make it out of tricking his fellow capitalist because that could only mean in the end the ruin of all capitalists except one, and even he would be ruined eventually because there would be nobody left to trick. And yet the capitalists continue to sell their commodities and grow rich. The answer is really a simple one, but it is concealed by the buying and selling system. The answer is that the commodity the worker sells his physical energy, differs from all other commodities in this, that its consumption results in a greater value than itself. Labour-power in action produces more value than the value of the food, clothing and other things upon which its own value is based.

If it costs in money, say, £5 to purchase what will keep the worker for a week then, in the course of that week, he will produce commodities whose value is far greater than £5. The difference between the £5 the worker gets and the greater amount he produces is the source of the capitalist’s profit. Thus by employing workers the capitalist makes a profit, and, generally speaking, the more workers he employs the more profit he makes. Therefore, although the capitalist pays the worker the value of his labour-power, the worker is robbed in the course of the productive process because more value is produced by him than he receives in wages.. While he is producing commodities he is also producing surplus value for the capitalist.
Gilmac.
Posted by Imposs1904 at 11:31 AM