Party News from the August 1948 issue of the Socialist Standard

Hackney Branch have now their own Speakers Class at Bethnal Green Library on Friday evenings. The aim is to develop a team of speakers for North and East London. This area has a number of excellent outdoor stations and it will ease pressure on the Central Propaganda Committee considerably if the branch can feed the stations with their own speakers. At present outdoor meetings are being held at Stamford Hill on Monday evenings, and at Fulbourne Street, Whitechapel Road (facing the London Hospital) on Wednesday evenings. The results are very encouraging.


Outdoor Meetings generally now need the support of party members more than ever before. The Conservative Party is making a great outdoor propaganda drive with many meetings all over London. They start their meetings with a big nucleus of supporters, which makes it much easier going for the speakers. Our members are urged to get to our meetings early and give them a good start off.


A Special Edition of bound volumes of five of our pamphlets is being prepared for public library use. These have been solidly bound and lettered in gold “Collected Socialist Pamphlets.” They are not for sale to party members or the public, but are reserved exclusively for public and university libraries. Wide-awake librarians will not miss this chance of adding a well-bound 307 page volume to their shelves containing objective socialist facts and views to place alongside the pseudo socialist literature of “ Communist” and Labour authors. The price is 8s. 6d.


The B.B.C. still refuses us time on the air. Our efforts have so far been fruitless, and we decided that the time had arrived to use some kind of pressure, or at least get publicity, in another direction. So we wrote to the Manchester Guardian and they published our letter on June 18th. We said in our letter that while there appeared to be fairly general agreement in principle that minority political views should be heard, in practice the B.B.C. interpreted the principle in a narrow and exclusive way. Mr. Burke, a former Assistant Postmaster General said in 1947 in the House of Commons that the minority should be given a fair chance and that to put only one aspect was to falsify the whole truth. The view put forward by the Socialist Party of Great Britain was not expressed by any of the majority or minority political parties selected by the B.B.C. for a hearing on the air, but in reply to our many requests to the B.B.C. we have been invariably told that they were unable to arrange a discussion in which we could be heard. This was in spite of the fact that two members of Parliament (one Labour and one Conservative) had told us of their desire to take part in a joint discussion with us. The B.B.C. were informed of this but they made it clear to us that in no circumstances would they allow us to broadcast. We concluded our letter to the Manchester Guardian by saying that it would be interesting to know on what ground the B.B.C. decided that certain minority views were to be permanently excluded. An allocation of only a small amount of time would be reasonable, but with this absolute ban it appeared equally reasonable that they should declare the ground on which it was based. We are not aware of any results from this letter and it is probable that the B.B.C. have decided to keep quiet.


Ealing Branch’s Debate with Christopher Hollis (Conservative M.P. for Devizes) at Ealing Town Hall was the most successful indoor meeting held by the Branch in Ealing. The hall was packed and numbers had to be turned away. H. Young was the party’s representative, and he dealt very adequately with Hollis’s somewhat original interpretation of Conservative policy. A collection of over £10 was taken.


A Manchester Comrade is giving us a very inspiring example of how the party literature can be sold. During the last two months he has disposed of over thirteen hundred copies of the pamphlet “Socialist Party—its Principles and Policy” by personally interviewing residents in various parts of Manchester. He has sent us a long and interesting letter describing the methods he adopts. He is keeping a record of all purchasers and passing it over to Manchester Branch for them to follow up.


An attractive new poster to advertise the “S.S.” is now at the printers. It will he found useful at meetings and for newsagents display boards. A specimen copy will be sent to each branch as soon as they are ready. 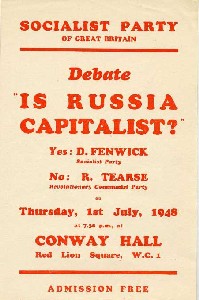 Debate with Trotskyists: “Is Russia Capitalist?”
On July 1st at Conway Hall D. Fenwick for the S.P.G.B. debated with R. Tearse for the Revolutionary Communist Party. In his opening half-hour Fenwick carefully defined Capitalism and Socialism in the usual Marxian terms and argued that the existence in Russia of a propertyless working class living by selling its labour-power for wages, and producing commodities for sale on the market shows that it is not Socialism but a form of State Capitalism. Admittedly it had not developed exactly on the lines of capitalism in the Western countries. Trotsky in “The Revolution Betrayed” had asserted that the term “State Capitalism” is meaningless, but certainly Lenin did not think so for in his “The Chief Task of Our Times” he had argued that State Capitalism would be a step forward for industrially backward Russia. The contrasts of riches and poverty in Russia and the growth of bondholding are features of Capitalism not Socialism. What is the interest paid to the bondholders if not surplus value resulting from the exploitation of the workers? Fenwick emphasised that the achievement of Socialism presupposes a socialist working class, it cannot he imposed by a dictatorship.

R. Tearse in reply claimed that the S.P.G.B. is wrong in describing the 1917 revolution as a bourgeois revolution. It would be a peculiar capitalist revolution that expropriates the capitalists. The S.P.G.B. idea of all the workers moving together towards Socialism is wishful thinking, and the notion of Capitalism and Socialism being divided by a sort of Chinese Wall is erroneous. In the introduction to “Civil War in France” Engels had conceived of a whole new generation after the working class seizure of power before it would be possible to have fully-fledged Socialism. The R.C.P. never claimed that Socialism exists in Russia. Marx and Engels, in the Communist Manifesto, when they wrote of revolutionary measures such as steeply-graduated income tax, and the centralisation of credit in the hands of the State, obviously envisaged the continuance of the wages system and commodity production in the transition period after the workers had gained power. The first essential step for the workers is to secure the centralisation of large-scale industry in the hands of the State as had been done in Russia. Inequality exists but this does not prove the existence of Capitalism. The rich in Russia are the artists and writers but in the S.P.G.B. pamphlet “Socialism” it is claimed that these better-paid workers are still members of the working class.

Bondholding is a very small feature in relation to the whole economy. The bondholder does not control undertakings. The bureaucracy may receive parasitic income from the exploitation of the working class but accumulation of capital through the individual capitalist and the resulting capitalist crises of boom and slump do not exist in Russia. What social group constitutes the capitalist class in Russia? He challenged Fenwick to answer. As regards the R.C.P.’s willingness to support Russia in war, this is justified because there you have a progressive economy based on the nationalisation of the whole economy.

In further contributions to the debate Fenwick referred to Marx’s statement of the possibility of the workers overthrowing the bourgeoisie and of this merely serving the development of the bourgeois revolution itself as happened in France in 1794 (quoted in “State and Socialist Revolution” by Martov). He also quoted from “Socialism, Utopian, and Scientific” where Engels showed that the nationalisation of industries does not lessen their capitalist nature. Russia was in fact affected by the 1931 crisis like other countries. He referred to the change in the law which allows holders of State bonds in Russia to bequeath them to their heirs and quoted Trotsky’s statement in “Revolution Betrayed” that if any such development occurred it would be a victory for the bureaucracy and would mean their conversion into a new ruling class. The measures at the end of Section II of the Communist Manifesto, showed that at that time the immediate establishment of Socialism after the capture of power was not entertained by Marx or Engels; but industry and knowledge had undergone great development since then. In 1872 Engels had said that the passage in question would have been very differently worded under the different conditions existing at the later date.

R. Tearse repeated his argument that wholesale nationalisation is different in kind from the nationalisation of sectors of industry as in this country. In Russia nationalisation would form the basis of Socialism after the transition period. The 1931 crisis did not affect Russia in the fundamental way it affected other countries. It was not the result of the accumulation of capital in the hands of private capitalists. As regards the quotation from “Socialism, Utopian and Scientific” about the capitalist nature of nationalised industries, it should not be overlooked that in the very next sentence Engels argued that though the capitalist relation is not done away with it is “brought to a head, it topples over.”

In Russia industry as a whole has been taken over by the State and the anarchy of private appropriation of surplus value does not exist. The defeat of Russia in war would be a defeat for the working class and a further lease of life for capitalism. There must be a transition period between capitalism and socialism and during this period capital and wages would exist but this alone does not make it capitalism. Though in 1872 Engels had said he and Marx would not in the changed conditions lay special stress on the measures proposed in the Communist Manifesto Engels never said the measures were wrong and he continued to call them revolutionary measures.

The debate was well-attended and the audience showed the closest attention to the by no means simple clash of argument. A collection of £10 15s. was taken up.