Between the Lines: From Russia With Confusion (1991) 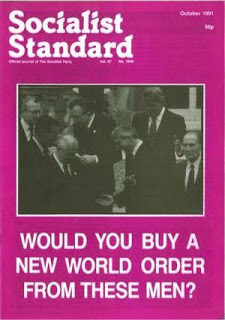 From Russia With Confusion

The mind-numbing simplicities of cold war propaganda dominated the British media's coverage of the Russian coup. News programmes offered a cartoon image of events. Gorbachev the Rather Good had been overthrown by The Big Bad Reds who could only be defeated by Boris the Great. As ever in the capitalist picture of history, the workers were depicted as mere spectators — extras in the scene: the BBC News called them "Yeltsin's people". Is that what all the bravery of the crowd was for — the standing in front of tanks and the demand that democratic rights be retained? All that to become Yeltsin's people?

For the media there was no question that the coup was successful. Great Man Gorbachev had been replaced by Judas Yenayev. And that was that. The media never once considered the possibility that people could alter their history — that the power struggle would be more than the in-fighting of a ruling elite. On the first night of the coup both BBC and ITN News broadcast effective obituaries for Gorbachev. When the crowd began to assemble, the media was shocked. But they did not explain this as the action of thousands of workers fighting against a dictatorship. The defence of the Russian parliament was explained entirely in terms of the will of leaders, notably Yeltsin. When the coup was overthrown the BBC and ITN continued to explain the whole affair in terms of a power battle at the top. But this was not so: the collapse of the Communist Party dictatorship after the coup's defeat was not decided by Yeltsin and his political allies (whose political careers had been carved out within that dictatorship), but by the will of the people, the working class majority. From BBC l's children's news programme Newsround to BBC2’s fairly sophisticated Newsnight the analysis of the collapse of state capitalism and the Russian Empire has been over-simplified to the point of utter distortion. Good has prevailed over Evil. Good equals the market which is portrayed as a redeemer. Yeltsin, a political opportunist, nationalist and populist demagogue, compared by those who know him well as a modem Mussolini, is given an uncritical press. Two days after the coup the ITV News at Ten included a ludicrous report about the failure of "Marxist economics" in Russia. This report claimed that Russia had been run according to policies stated by Marx in The Communist Manifesto written in 1848. This unsubstantiated rubbish was put out without a thought given to the long-standing Marxist analysis of Russia as a state capitalist country — which is exactly what Lenin himself called it at the outset. (Speaking of crazy historical claims, the school's supplement to The Guardian in the week after the coup claimed that Marx supported the Bolshevik revolution of 1917 — thirty-three years after he died!) On the day that Yeltsin's elite banned the Communist Party in Russia (an unpromising start to a liberal democratic government) the ever-mistaken CNN opened its midday news with the proclamation that the Russian people were at last free. Indeed, CNN's American hysteria was reflected on the British news broadcasts by reporters making wild comments about the euphoria of the Russian people. In fact with continued empty shelves in the shops, rent food and fare increases on the way and 30 million plus to become unemployed soon, the delight of feeling free was about as great as in the British cities where workers have spent the nights celebrating with street riots.

On 7 September BBC2 had Charles Wheeler introduce a programme showing excerpts from Leningrad's archives of propaganda films. The Orwellian character of what was shown was chilling. Never again, we suspect will such crude propaganda con the wage slaves. But what of the less crude methods of keeping the proles in their place? We expect that Yeltsin's new TV controllers are studying the methods of the BBC and the US networks for newer, more subtle tricks of deceit; less conspicuous forms of ideological doping.

In the modern battle of ideas the media is crucial. The media bosses are accountable to no-one, least of all the workers. They continue to lie, to twist, to omit, to push workers into believing half-truths, non-truths and cartoon views of the world in which we live. It was no coincidence that the first action of the coup organisers in Moscow was to close the TV stations which they could not rely on. If the parish priest was the ideological mouthpiece of feudal rule, the newscaster is the high priest of capitalist ideology.

This writer cheered at the overthrow of the Leninist dictators. Their downfall and the tremendous political fire within the bellies of the workers who took to the streets, who tragically do not know what they do want but only what they don't, was a great moment to live through. As the cheering of the media hirelings started, with all their phoney talk of the downfall of Communism and triumph of Freedom through Market Forces, this writer's cheering slopped abruptly. Solidarity with our fellow workers, yes; but with the cynical pimps whose champagne corks were popping at the thought of new profits to be made — Never!