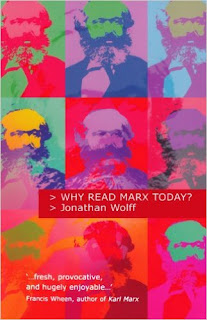 Book Review from the February 2004 issue of the Socialist Standard

There are many introductory books of this type, although this is much better than most. It accurately summarizes Marx's thought for university students. But why read Marx today, other than for academic interest? Wolff does a good job of locating Marx's thought in the context of the nineteenth century, but is less successful when dealing with Marx's relevance to the twenty-first century. For example, Wolff's assessment - and dismissal - of Marx's theory of history relies heavily on GA Cohen's functionalist interpretation in his book Karl Marx's Theory of History: A Defence (1978). If, instead of Cohen's determinist interpretation, Wolff had located the class struggle as the motor of history, he might have reached a different assessment.

Wolff provides no evidence for this allegation. Perhaps he is thinking of the jibe by the SWPer David Widgery in his 1976 book The Left in Britain 1956-1968 which makes a similarly daft claim about the Socialist Party. For the record, the Socialist Party did not reject the Russian revolution "within its first 24 hours". Our initial reaction was supportive of the Bolshevik decision to withdraw from the futile carnage of World War One. Our first analysis of the November 1917 revolution appeared in the Socialist Standard in August 1918. Hardly a rush to judgement. Nevertheless, the conclusion was unambiguous: "What justification is there, then, for terming the upheaval in Russia a Socialist Revolution? None whatever beyond the fact that the leaders in the November movement claim to be Marxian Socialists". (See our archives).

On a more general point, it should be noted that over the past few decades it has become increasingly common to find books on Marx and Marxism which take our side of the argument, unless they have a Leninist axe to grind. Here is the example of another "What Marx really meant" book which discusses Marx's concept of socialism in ways which could easily have come from the pages of the Socialist Standard, only the author does it purely on the basis of what Marx actually said. Of course time has moved on and the Socialist Party has stated its own differences with Marx and developed his thought further, and made its own contributions to socialist theory. Yet we can agree with Wolff that "we can safely conclude that the world has not (yet?) seen a Marxist revolution."