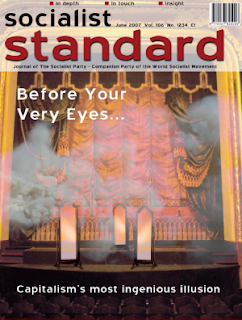 In March the philosopher Julian Baggini published a much commented on book, Welcome to Everytown. A Journey into the English Mind (Granta, £14.99), about the everyday attitudes to life of people in an average English town (in the event, a part of Rotherham). He also writes a regular column in the Skeptic. In the Autumn 2006 issue he gave as an example of "a priori reasoning based on fundamental convictions, rather than empirical reasoning based on the facts of experience" the case of a "utopian socialist (or perhaps anarcho-syndicalist, she wasn't quite sure)" he had met who "was convinced that if we were to abolish money and unshackle people from the oppressive yoke of advanced consumer capitalism, we would all behave well and honourably, doing our all for the common good without concern for personal reward". He went on "for our socialist, her self-evident first principles are that the only fair society is one where wealth is distributed equally, and that human beings are sufficiently virtuous that they would do whatever it took to make such a society function".

He then set out the alleged factual case against this. First, "any faith in the intrinsic goodness of humanity is surely untenable after Auschwitz, Bosnia, Rwanda and the countless other acts of barbarity our species has perpetrated". Second, "people actually pursue their own narrow self-interests and competitive advantage". Third, we can see "the naturalness of hierarchy by looking at the behaviour of our primate cousins". Socialists recognise this as of course the hoary old "human nature objection", a pessimistic view ultimately derived from the Christian dogma that we are all born sinful and depraved which is still a deeply rooted popular prejudice.

We don't know if Baggini's acquaintance actually expressed herself in the terms he sets out or whether he has made her into a straw-woman he can easily knock down. We can broadly go along with her argument even if we wouldn't want to be committed to saying that humans are (to speak like a moral philosopher) intrinsically good or virtuous (and that we'd prefer to talk of distribution according to needs rather than equal distribution). But his objections reveal him to be guilty of precisely what he accuses her of: arguing from an already decided position without taking into account "the facts of experience".

People certainly do pursue what they perceive to be their own interest - and why not, as biological organisms we seek to survive in the best way we can - but is it really the experience of all human societies that their individual members always and only, or even predominantly, pursue "their own narrow self-interests and competitive advantage"? What about the societies where, given the way that society is organised to secure the means of subsistence, people have taken a broader view of their self-interest, seeing this as being served by cooperating with others rather than trying to do them down all the time? In fact, not even capitalism, whose structure encourages unbridled individualism and competition between people, could survive if people didn't also cooperate.

The "facts of experience" are that the various different kinds of society that humans have lived in in the course of their history and pre-history show that our species is capable of a wide variety of different behaviours. This has been confirmed by physical anthropologists and anatomists who have identified the biological features - brain capable of abstract thought, larynx and other organs capable of speech, long period to maturity - that allow "human nature" to be flexible, adaptable. Not infinitely adaptable, but enough to be able to live in a society without money, competition to satisfy material needs, or hierarchy.

It's a nice thought that gorillas, chimps and orangutans are our cousins. They do look a bit like us, but, scientifically, we are a lot more distantly related than that. We do share a common ancestor but that could have been as long ago as 10 million years. After that their ancestors and ours went their separate ways. They ended up as they have, with a relatively restricted range of possible behaviours.

In contrast, the homo line evolved into a species without any particular way of surviving in the rest of nature and whose members are capable of adopting a behaviour appropriate for surviving in a wide variety of different environments, both social and physical. Our "primate cousins" didn't. Which is why it is invalid to infer anything about human behaviour from theirs. It is true that we share over 99 percent of genes with them, but that just confirms that the huge difference between them and us as to how we survive in nature is not due to biology but to our ability to adapt.

It was Marx who said that philosophers only interpreted the world. Baggini hasn't even done that here. All he has done is reflect the prejudices of his day.