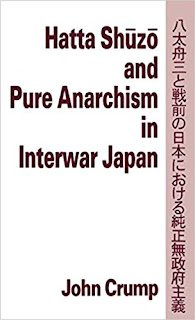 Book Review from the January 1994 issue of the Socialist Standard

It is a little known fact, brought out by John Crump in this ridiculously priced new book, that until they were crushed by the militarist State in 1936 there was a small but flourishing anarchist movement in Japan. As elsewhere various currents existed, the main ones being the anarcho-communists and the anarcho-syndicalists.

The anarcho-communists, as their name suggests, were anarchists who were communists in the sense of standing for a society based on common ownership where people would produce goods and services to be taken and used without buying and selling and in accordance with the principle "from each according to their ability, to each according to their needs". In other words, they stood more or less for what we call Socialism.

The anarcho-syndicalists, on the other hand, were anarchists who embraced the doctrine of syndicalism. This arose at the turn of the century and taught that what workers should do to end their exploitation was to organise in unions (or syndicats in French, hence syndicalism). Unions were seen as providing the means both of defending workers' interests under capitalism and, once capitalism had been overthrown in a general strike, of administering the new society.

While in other countries anarcho-communists and anarcho-syndicalists co-existed without seeing any fundamental incompatibility between their respective views, this was not the case in Japan. In the 1920s a group of "pure anarchists" emerged determined to rid the anarchist movement of what they regarded as the contamination of syndicalism. Prominent among them was Hatta Shuzo (1886-1934), a former Presbyterian clergyman.

The theme of Crump's book is that Hatta's critique of syndicalism was an important contribution to revolutionary theory. Hatta's criticism was radical. He disagreed with the syndicalist aim of a society and economy run by industrial unions, and he disagreed that the class struggle of workers for higher wages and better conditions could ever lead to a moneyless, stateless society.

A society run by industrial unions, said Hatta, would be a society which would perpetuate the occupational divisions which capitalism imposed on workers. In addition, the relations between the separate union-run industries would have to be regulated either by some central administration, which he claimed would amount to a government and so give rise to a new ruling class (his weakest argument, this), or by some form of commercial transaction even if conducted in labour-time vouchers rather than money as most syndicalists proposed. In other words, a syndicalist society would be a sort of capitalism run by the unions.

Hatta argued that the basic units of an anarchist society could not be industrial unions but only "communes", or local communities where real links of solidarity could exist between people and which would combine agriculture and small-scale industry so as to be able to satisfy all their needs. Hatta evisaged these having to be self-sufficient, but why? He forced himself into arguing this unreasonable and unnecessary position because of his mistaken belief thar any permanent administrative structure beyond local level (such as one that might facilitate local communities having free access to the materials and goods they did''t produce) would provide the basis for a new ruling class. Why should it if everybody had free access to what they needed and those who staffed it had no armed force at their disposal?

As to how he envisaged a communist society coming about, his views were even more wildly wrong than the general strike of the traditional syndicalists. He advocated the so-called "creative violence" of an anarchist minority which would, supposedly, arouse the peasant and worker masses to spontaneously express their "natural anarchism". In other words, he lived up to the popular caricature of anarchists as bomb-throwers. In doing so he overlooked that minority violence can never lead to a free society, only to repression by the existing State or the rule of a new minority. For communism (or socialism) to be established, as Crump points out, the mass of the prople must understand the nature and purpose of the new society. Such democratically-organised majority action, we would add, need not be violent and can use existing political institutions such as the ballot-box and parliament. Who needs violence when you're the majority?

There is a Japanese language page on World Socialism on MySpace that you can access here.
Posted by Imposs1904 at 1:38 AM