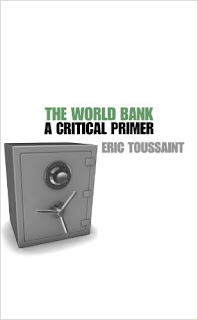 Throughout this comparative study of official World Bank statements and internal memos, Eric Toussaint lays bare the absolute conflict between the public and private ideologies, time after time revealing the imperative of achieving US political aims above all other considerations. It is a very interesting book making the facts and figures of economics accessible to the layperson through ample explicit tables and clear explanations with minimum use of jargon.

Contrary to common belief, the mission of the World Bank under the umbrella of the UN was not and is not to reduce poverty but (1) to rebuild Europe post second world war and (2) to promote the economic growth of the South through development. As a part of the World Bank Group the World Bank is (supposedly) bound by the UN Charter and according to the International Court of Justice it is the duty of the World Bank to respect human rights and customary law in general. However, nowhere is this obligation seen to be incorporated in the implementation of their policies; in fact examples abound as to how readily and easily these obligations have been circumvented or simply disregarded. In strict violation of a UN right of people to self-determination the World Bank granted loans in the 1950s to Belgium, France and Britain to finance projects in their colonies, mostly for mining for the benefit of the colonial powers and then, following independence, the debt was transferred to the newly emerging nations. This “odious debt” is a violation of international law which Toussaint describes as having been imposed on “the Bank, with the connivance of its main colonial shareholders and the blessing of the US”.

The Bank’s mandate was to be purely economic, not to be involved in politics but even the first loan it granted in 1947, to France, was held up by the US government until Communist Party members were ousted from the coalition government. One chapter is specifically devoted to examples showing that the policy of granting loans is first and foremost determined by the US government often on the basis of purely political objectives. From the 1990s the US influenced against granting loans in areas that would compete with US products. Where oil was concerned drilling was encouraged, refining, not. In essence, more primitive accumulation, showing no regard for environmental concerns or human rights and contrary to the UN Charter. The over-riding message is the blatant, systematic disregard for the founding principles of the Charter.

As to the answers to criticisms of the Bank’s succession of errors or bad management Toussaint reveals them to be “a deliberate part of a coherent, carefully thought out, theoretical plan, taught with great application in most universities.” The strategy, in a nutshell, is that providing infrastructure should fall on the state sector and anything that might prove profitable should be given to the private sector (preferably favouring multinational corporations), i.e. privatisation of profits combined with the socialisation of the cost of anything not profitable. Within the indebted country failing private companies would have their debt transferred to the state (as the military junta in Argentina transferred $12 billion of private debt to the state). Thus the capitalists in developing countries escape their debt, having it paid instead by the Treasury at the expense of the workers (Toussaint’s analysis). In Argentina in the 80s (just one typical example) even subsidiaries of transnational corporations indebted to their parent companies had their debts transferred to the Argentina Treasury; Renault, Mercedes-Benz, City Bank, Chase Manhattan, Société Générale etc. etc., all transferred their debt and as the government had no access to their accounts, one might raise an eyebrow!

Describing the demise of Mexico in the 80s Toussaint is of the opinion that “Mexico has lost control of its destiny which, historically, has been the US’s objective since the nineteenth century.” By the end of the 90s all six major developing regions showed negative net transfer meaning simply that their debt to the World Bank was continuing to grow because they couldn’t keep up with the payments. Reports and internal memos reveal the Bank saw the crisis on the horizon but their “double discourse” informed the public and indebted countries that there was nothing to worry about. When the subject of Debt Reduction was eventually raised (in 1989) by the US government the Bank complied. This consisted of indebted nations buying US Treasury bonds in exchange for a reduction of their debt; in effect now the indebted countries were financing the policy of indebtedness of the US itself. As for the Bank’s own accounts, since its founding in 1946, they have consistently produced positive net results. Since 1985 each year has exceeded $1billion in profits whilst all developing countries’ net transfers since 1987 have been negative, resulting in increasing debt.

Eric Toussaint is President of the Committee for the Abolition of Third World Debt (CADTM) whose mission is “to contribute to the emergence of a world based on the sovereignty of its peoples, on international solidarity, equality and social justice” with which we can broadly agree. Throughout the book he promotes “a break with the capitalist system” and tells us that “a system of redistribution of wealth is needed.” Point 30 of 31 indictments of the World Bank says “a new international, democratic institution must urgently be found to promote a redistribution of wealth and to support people’s efforts towards development that is socially just and respectful of nature.” Then he goes on to talk of 21st century socialism without addressing what this means except to break away from the Washington Consensus, the World Bank and the IMF in favour of new financial and monetary institutions and to point to possible alternatives such as Venezuela, Bolivia and Ecuador.

An alternative system, hostile to capitalism but without a commitment to abolishing money? – Is it possible that Eric Toussaint hasn’t yet heard of the Socialist Party?
Janet Surman
Posted by Imposs1904 at 4:36 PM