Helicopter Ben and the money supply (2009)


Governments now call it “quantitative easing”. It used to be simply called inflating the currency. And it’s now official policy. 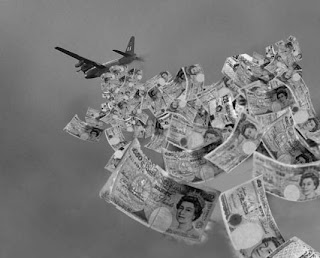 In the 1930s Keynes suggested burying banknotes and then paying people to dig them up. Ben Bernanke, current chairman of the US Federal Reserve, is said to have come up with a modern version:


“The most radical option is to send the newly-minted money directly to the US Government. It could then be handed out to citizens via tax relief. This form of monetary expansion would be equivalent to printing money and dropping it from helicopters for people to pick up – a graphically extreme proposal that earned the Fed chairman, Ben Bernanke, his nickname of Helicopter Ben” (Times, 18 December).

The present crisis is confirming some of the truths of Marxian economics. First, that banks cannot “create credit” out of nothing. Second, that the rise in the general price level, popularly but inaccurately called “inflation”, is caused by the government’s bank, the central bank, issuing more currency than the economy requires for its various transactions such as buying things, settling debts and paying taxes.

Inflation, which up to now politicians have been telling us is the main economic problem to avoid, is now being seen as one supposed way out of the deepening depression. After years of propaganda blaming inflation on wage increases, they now want the general price level to rise, and know how to bring this about – not by raising wages of course but by the government over-issuing the currency by printing more and more of it.

Seven years ago, when he was still only a governor of the New York Federal Reserve Bank, Bernanke explained how, by overissuing a paper currency that was not convertible on demand into a pre-fixed amount of gold, governments could create “positive inflation”:


“[U]nder a fiat (that is, paper) money system, a government (in practice, the central bank in cooperation with other agencies) should always be able to generate increased nominal spending and inflation, even when the short-term nominal interest rate is at zero. ( . . .) US dollars have value only to the extent that they are strictly limited in supply. But the US government has a technology, called a printing press (or, today, its electronic equivalent), that allows it to produce as many U.S. dollars as it wishes at essentially no cost. By increasing the number of US dollars in circulation, or even by credibly threatening to do so, the US government can also reduce the value of a dollar in terms of goods and services, which is equivalent to raising the prices in dollars of those goods and services. We conclude that, under a paper-money system, a determined government can always generate higher spending and hence positive inflation." (Talk “Deflation : Making Sure It Doesn’t Happen Here”, 21 November 2002 at (http://www.federalreserve.gov/boarddocs/speeches/)

What Bernanke describes here is simply inflating the currency, even though it’s now being called “quantitative easing”. Marx had already explained this 150 years ago in his A Critique of Political Economy, where he discussed what would happen if a government overissued what Bernanke calls “fiat money”:


“Let us assume that £14 million is the amount of gold required for the circulation of commodities and that the State throws 210 million notes each called £1 into circulation: these 210 million would then stand for total of gold worth £14 million. The effect would be the same as if the notes issued by the State were to represent a metal whose value was one-fifteenth that of gold or that each note was intended to represent one-fifteenth of the previous weight of gold. This would have changed nothing but the nomenclature of the standard of prices, which is of course purely conventional, quite irrespective of whether it is brought about directly by a change in the monetary standard or indirectly by an increase in the number of paper notes issued in accordance with a new lower standard. As the name pound-sterling would now indicate one-fifteenth of the previous quantity of gold, all commodity-prices would be fifteen times higher and 210 million pound notes would now be indeed just as necessary as 14 million had previously been. The decrease in the quantity of gold which each individual token of value represented would be proportional to the increased aggregate value of these tokens. The rise in prices would be merely a reaction of the process of circulation, which forcibly placed the token of value on a par with the quantity of gold which they are supposed to replace in the sphere of circulation.”

This artificial bloating of monetary demand is what inflation, strictly speaking, means. Governments now want to consciously use this process to exert an upward pressure on the general price level to try to stop it falling as it would otherwise tend to in a deep recession. It might be thought, in view of all the publicity put out by supermarkets and chain stores about how they have all slashed prices more than their rivals, that falling prices would be a good thing. But this is not how the government sees it. They think that this would make the current depression worse, as they want to encourage people to spend whereas, with falling prices, people might postpone spending in the hope of prices falling even further.

Inflating the currency to try to stop money prices from falling is now the official policy of both the government and the Bank of England. That this is what is happening is being openly admitted. For instance, the financial journalist, Anatole Kaletsky, wrote in the Times (18 December) that “today the threat is deflation, not inflation” so that “central banks are right to flood the world economy with newly printed money – so long as they know when to stop”, conceding that “a central bank that prints money to finance large-scale government spending is, in theory, moving into territory occupied by Zimbabwe and Weimar Germany”.

In a previous article (15 December) he had attempted a more sophisticated analysis, introducing the concepts of “monetary base” and “money multiplier”. He gave the definition of the first as:

This is rather more than the currency as it includes deposits from banks at the Bank of England, which do not circulate and so do not have an effect on the general price level. Nevertheless, the currency makes up over half of this “base money”.

According to Kaletsky, this figure is currently around £100 billion. He then introduces what he calls “broad money” defined as “all private sector bank and building society deposits, money market funds and so on”. Reverting to the language of before the credit crunch when it was thought that banks would never have any problem to lend money, Kaletsky refers to this “broad money” as being “created by private banks”. This is highly misleading in that what the banks lend out has not been “created” by them but is the result of them acquiring other people’s money in one way or another. It reflects what banks do, which is to recycle the purchasing power of those who don’t want to use it immediately. He does, however, admit that “the moment there is an iota of doubt, bank deposits cease to be true money, as demonstrated by the queues outside Northern Rock last year”.

Whether it is “true” money or not (and Marxists would say that it is not) the figure for “broad money” is some £1,900 billion. So, in Britain, the “money multiplier” is 19. Kaletsky notes that in other countries it is much less. In Japan it is 11, in the Eurozone 7.5 and in the US 5.3. He says that this means that Britain can safely afford to issue more “base money” and suggests a doubling to a further £100 billion, so reducing the “money multiplier” to about 10.

If all of this additional “base money” were to be in the form of notes and coin this would amount to a massive inflation of the currency, bringing it way above what the economy needs for its transactions (especially as, in a depression, the number of these will fall). Kaletsky envisages this to a certain extent as he mentions the Bank of England buying government bonds or even providing money directly to the government to spend, both of which would involve printing more currency .

In fact. facilitating the buying of government bonds with new money has been the way that successive governments have, intentionally or not, inflated the currency in Britain since 1940 and why the general price level has risen continuously since then. Kaletsky explained in his 18 December article how this worked in the US. The Federal Reserve Bank, as the central bank, will buy government bonds and


“will pay for them simply by making electronic transfers into the bank accounts of the people or institutions selling. For every $1 million worth of assets bought, the Fed will transfer $1 million of new money into private bank accounts. This ‘money’ will come literally out of nowhere. It will simply be an electronic blip on the Fed's computer. Because electronic deposits at the Fed are the ultimate form of legal tender in the US system, the result will be that the US economy has $1 million more money.”

When these banks draw on the extra amount in their accounts extra currency is brought into circulation which, if it more than is required by the economy (as it has been), leads to the rise in general price level popularly called inflation.

Kaletsky had already explained in a previous article (11 December) where the money to try to spend a way out of the depression was likely to come from:


“For the next year or two, the money for the British fiscal stimulus will come from the Bank of England's printing works in Dedham. In the case of the far bigger job-creation schemes and industry bailouts planned by Barack Obama, the money will come from the Washington and Fort Worth facilities of the US Bureau of Engraving and Printing, an institution rejoicing in the most succinctly descriptive internet address I have encountered: www.moneyfactory.gov.”

Burying bank notes and digging them up again. Dropping them from helicopters for people to pick up. In fact even using printed coloured pieces of paper to have access to what you need. These are crackpot ideas compared with the simple socialist proposition to produce things for use not for sale at a profit, so ending the need to use money at all.
Adam Buick
Posted by Imposs1904 at 3:57 PM