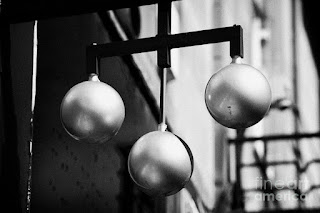 Originally posted on the Socialism Or Your Money Back blog

When I was a very little girl my family had a benefactor called Uncle. At the time I thought he was a relation of ours. In those days it was considered to be impolite for children to call adult friends and neighbours by their first name; it would have to be Auntie Betty or Uncle Fred even when they were no relation to you whatsoever. But my parents were rather unconventional and so dispensed with this silly tradition. So I thought this Uncle must be a real uncle even though I had never met him.

What was bewildering for me was listening to my parents discussing him. Mum would say "I'll take your suit down to Uncle's on Monday and get it back in time for the weekend." Dad wouldn't be likely to wear his best suit for work. He had a working uniform of dark blue denim with WBC (Woolwich Borough Council) etched on the back of the jacket. His suit was worn at weekends only. Uncle paid my mother for the loan of the suit, and sometimes she would let Uncle borrow my eldest brother's suit as well. This led to a terrible quarrel in our house. Alex, my elder brother, had a new girlfriend he was constantly trying to impress. Whenever he brought her to the house my younger brother and I would mouth the word "Yuk" to one another; they were forever kissing each other and we thought they were sloppy. Anyway, the row was over the fact that Mum had taken Alex's suit to Uncle's and had failed, for some reason, to get it back in time for the weekend when the beloved girlfriend was due to visit. They all shouted at each other for hours and Dad told him to get out if he didn't like it. He said very angrily, "It's to put food on the table." It was an ugly scene.

I spent an inordinate amount of time trying to imagine this Uncle of mine. Why would he need to pay Mum for the loan of Dad's rather tatty suit? And what would he want with Alex's suit too? I even asked a couple of the kids at school if their dads and brothers had uncles who borrowed their clothes and, looking mystified, they shook their heads. One girl told me, "My dad hasn't got a suit."

Then the day came when I was to meet Uncle. I had been away from school with a head cold and as Mum refused to leave me alone in the house when she went out, we both got on a tram to town. Mum carried with her one of those battered, cardboard suitcases, the only kind poor people could afford in those days, and a woman who got on the tram at the same time asked me, "Going on your holidays, are you?" I told her, "No, we're going to Uncle's, aren't we Mum?" Later Mum glared at me saying, "Must you show me up like that?" All my life I've felt sorry for children. They are seldom given any examples of how to be truthful, and adults have so much more practice in lying. Wasn't it Shakespeare who said, "Out of the mouths of babes and of sucklings"? Well, something like that.

In town I trotted alongside my mother excited at the prospect of meeting Uncle at last. We turned into an alleyway and there stood a small building with three brass balls over the top of the door. Inside it was dim and dusty and there was a counter like ordinary shops have. A man appeared suddenly from a door behind the counter and Mum opened the case and took out the suit. He looked the suit over and then gave her some money and a ticket. I watched this transaction with great interest. Some uncle—the man ignored me! I had a real uncle who used to pat me on the head and say, "You're a little beauty, just like your mother," and sometimes he would give me a packet of sweets and tell me not to talk so much.

This man was not my uncle. He wasn't pleasant to my mother, nor she to him. She resented him. Well, who wouldn't resent a man who took your husband's suit, laid it on a dusty old shelf somewhere, lent you money and charged you interest on it?

Mum picked up the empty case and we traipsed back through the town and caught a tram home. My mind teemed with questions, none of which I could give a name to and something warned me against trying to voice any of them. That day, young as I was, I saw the rudiments of capitalism—that every action must involve money, that nothing, absolutely nothing, can exist without exploitation to make the system work. Of course I didn't really understand that at the time, but I peered out at the world, short-sighted though I was, and suspected that it was a very strange place indeed. And so it is. I waited for the adults to discover my myopia and recommend spectacles. When at last I got them the world came into sharper focus and my mind reeled at the absurdity of it all, that humans arrange affairs in such a way as to create chaos. Uncle's was a tiny part of the personal experience which shaped me into the person I am today and into being a socialist. That experience was invaluable I think.
Heather Ball

A Socialist Life by Heather Ball

Sadly, Heather died before she could complete her writing project. This collection, published by the Socialist Party, presents the case for Socialism on the basis of individual, everyday experience. £3.75 From Socialist Party 52 Clapham High Street, London SW4 7UN.
Posted by Imposs1904 at 8:25 AM